It's the best version of the McLaren Sports Series thus far - what more do you need to know?

As has been widely discussed with the

is not short of rivals around its £164,000 starting price. You want a stunning powertrain? Audi launched the

the day after the McLaren at Goodwood. There's of course a related unit in the

too, for those feeling a tad flusher. Covet a menacing front-engined V8 sports car? AMG

can see to that

. Need four seats and devastating performance in any weather? Try a Turbo S. And that's before you mention the

. The choice is almost comically vast - where's that What Car? group test when you really need it? 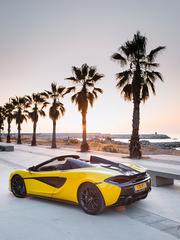 All these cars bring their own very desirable USP - or indeed many, er, SPs - to the sector. There isn't a duffer in the group. So what does the McLaren bring to this saturated segment?

Weight is what it brings. Or rather, as you'll probably know, a lack thereof. The Spider adds just 46kg to the weight of a 570S Coupe, and that's all in the roof mechanism and panels (i.e. none of it is chassis strengthening). That means a lightest dry weight of 1,359kg for the Spider, a huge amount less than the R8 (1,612kg dry), 911 (1,670kg ready to go but without driver) or AMG (1,660kg to the same spec as the Porsche). And, well, light cars tend to be the most dynamic ones, don't they?

With a weight gain of just three per cent - that would be a good return after Christmas - the same power and, well, very little else changed from the Coupe, the Spider makes some very favourable first impressions. Assuming, of course, you can stand the shame of being a whole tenth slower to 124mph.

Speed doesn't Matter
The joy of recent McLarens, however, has been their ability to entertain and involve at half that speed. Heck, at a quarter of that speed. The Spider is no different to those cars, proving that a good sports car is as much about the experience as it is outright speed. 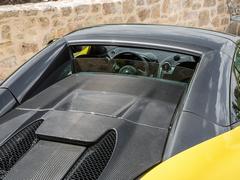 While familiar, these points bear worth repeating because, though they sound simple, they all contribute to a rich and rewarding driver's car. More than that it's hard to think of a rival that so emphatically prioritises the driver. The 570S is up there with the Lotus Elise for the clarity of its steering, the brake pedal is spot on, and the damping is fantastic; they sound like small details, but they make the car so pleasant to use and interact with at ordinary speeds. You can feel what the road and car is doing beneath you, measure out your inputs accurately and efficiently, and remember what it is to enjoy a car that wants the driver front and centre in proceedings. Well, front and left in truth, though hopefully you see what we're getting at.

Crucially none of that is affected in the switch to Spider. If anything it's more engaging now because of the open air around you - accessible in just 15 seconds, don't forget - and the racket from behind. Sorry, sound from behind. It still isn't the most thrilling soundtrack, the McLaren's, blaring and fizzing through its rev range rather than singing. It's very far from a bad noise, but there's little doubt either that an R8 or AMG GT, or even an F-Type SVR, offers considerably more sonic entertainment. Perhaps you don't care, though noise is an important factor with convertibles - just look at the discussion around the 718 Boxster... 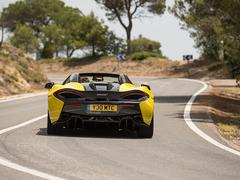 Fast is a given at £160K; involvement is key here

What there can be no debate on however is just how ludicrously rapid the 570S Spider is. Again that will be because of the minimal weight gain, and anything that can hit 124mph in less than 10 seconds is very, very fast. In the middle of the last decade 580hp qualified your car as a big boy supercar (Lamborghini Murcielago), yet here we are in 2017 and a car with 10hp (and a hell of a lot of weight) less is very much a 'junior supercar'. Madness. Whatever, the Spider is staggeringly quick and matched to the dual-clutch gearbox about which there can be very few complaints. There's even the odd 'BANG!' from behind when the exhaust gets really hot, which is exciting. Ultimately the powertrain of a

Thing is, once driving at speeds more befitting of a new 200mph supercar (while trying to keep a hungover Dutchman asleep in the passenger seat - long story), the McLaren might be better than the Ferrari. Might be. That carbon tub simply means that nothing is sacrificed dynamically, to the extent that exactly the same spring, damper and roll bar settings are carried over from Coupe to Spider. Which therefore means you get the same superb precision, agility and involvement with this car; regardless of Ferrari's efforts, the same transfer doesn't quite happen from 488 GTB to Spider.

See, look, the roof does go up too

McLaren describes the Spider as 'convertible without compromise' and, frustrating though it is for a journalist to agree with the PR message, it certainly comes across that way. All that is so enjoyable about the fixed roof car remains here: that tub gives incredible torsional stiffness but the suspension allows the car to breathe with the road; the grip is huge but you're told what's going on the whole time; the performance is immense, but the Spider doesn't have to be at ten-tenths to entertain.

Spidey senses
There are problems, though. There have to be. Despite McLaren's persistence with the Brake Steer technology, there's a suspicion that a locking rear differential would give it more precision on corner exit. Where in something like a 488 - that car again - you can feel power being distributed across the rear, in the McLaren there's a greater sense of just the inside wheel being braked, quelling any greediness with a more heavy handed approach. A minor concern for the vast majority, though it is there. 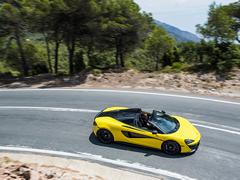 Spoilt for choice at the money - this would be ours

A bigger issue will be the navigation system, which is raised by a McLaren PR at a lunch stop before a journalist even mentions it. Apparently a lot of effort has been put into improving it for the

, though for now it feels below par. It's slow to respond, the graphics aren't brilliant and the instructions aren't all that clear. Could Apple CarPlay or Android Auto perhaps be incorporated soon? Certainly it's far more of a real world issue than whether continuing with an open differential is fun enough... Speaking of real world, the seats in our test car were very uncomfortable for both the driver and passenger over six foot. Curious.

Those flaws aside, the Spider can be considered a resounding, thrilling, brilliant success. As the old adage goes, anyone can make a fast car but it takes skill to make a fast car go slowly. Or something along those lines. That the Sports Series McLarens are already so absorbing at all speeds is arguably their greatest success; with the Spider that depth of talent has been complemented by an additional layer of drop-top supercar glamour and excitement. It's fantastic.