A new bumper and freshened up interior you say? To Ascari!

If you're thinking this looks quite a lot like the old Peugeot 308 GTI, then you're not wrong - to all intents and purposes this is ostensibly the same

. OK, so the bumpers have been freshened up, the infotainment updated and the safety kit list bolstered, but the bits we care about have remained untouched.

By and large, this is a very good thing. This is probably the lightest C-segment hot hatch around at 1,280kg (with a driver and all fluids) plus, with the removal of the 250 model from the UK, the only 308 GTI you can now buy comes with 270hp, 380mm front discs and a standard Torsen limited-slip differential. 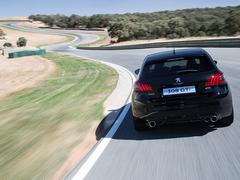 So why drive it now, if so little has changed? Well, you don't pass up opportunities to drive at Ascari - particularly with the original test having taken place on an unfamiliar track - and the market has changed significantly since the 308 was first introduced. The

has been refreshed, the

is new and the

Even before you set off, there's no doubt that this remains a hot hatch more at the Golf end of the spectrum than the Civic. The seats are supportive but quite squishy, and the dash seemingly more focused on plushness (which it does very well) than performance. And yes, the tiny steering wheel remains.

Don't dismiss the 308 however, as this is a cracking hot hatch. No, seriously. It's easily more entertaining than a Golf GTI on circuit, and just a few tweaks away from being superb. 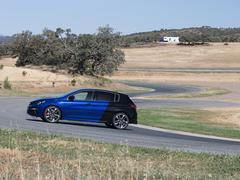 The weight, or lack thereof, predictably makes itself noticeable immediately. Combined with really direct steering the 308 darts into every apex, eager and agile from the off. The car can keep up too, following the front end through precisely and giving you the confidence to try a bit more entry speed next time around...

It can take that too, the Michelin Pilot Super Sports offering up strong grip and the car's turn in balance pleasingly neutral. Obviously if you pile in too hot it will understeer, though the limits are admirably high. And that famed Peugeot hot hatch oversteer? Well the ESC never went beyond sport mode - probably best, given previous experience - but there's clearly scope to adjust the line just subtly with the brakes and the throttle. And, well, you can't be Scandinavian flicking on a track day, can you? Certainly though, it's more immersive than the rather plain exterior might lead you to believe.

The brakes, while a bit softer underfoot than you might like, are super strong and have great staying power, resisting fade incredibly well. The damping - without configurability, don't forget - feels great, supple enough to use kerbs yet with great control too. The gear ratios are stacked close together so, while the shift isn't the best around, it feels urgent and willing on track. Remember as well that this is making 270hp from just 1.6-litres, which remains some achievement. Never on track did it feel lacking, either out of the slower hairpins or pulling fourth and fifth gear through the quicker stuff.

Of course there are some downsides though. That engine, while good, doesn't feel as remarkable as it did a few years ago. While it didn't struggle, there's an impression the EA888 2.0-litre in the VW cars would be hauling more strongly from even fewer revs; in addition, a Civic Type R will not only be quicker, but it's a keener, revvier engine. 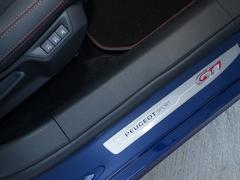 What a shame the Torsen limited-slip diff couldn't have been wound up just a bit tighter. It never gives you the confidence under power that the best front-wheel drive cars with them do, the line tightening modest and the front washing out a tad. Indeed while the Peugeot's front axle responds quicker than a

from VW, those cars actually can deliver better traction once hooked up. Strange. Certainly compared to a Civic the Peugeot's diff feels to be doing very little.

And the steering, that source of much consternation for so long now? On track it's not an issue, the quick rack meaning reduced arm twirling and the small wheel less frustrating because - let's be honest - you're probably concentrating on other things. At least the sense of agility implied by the wheel carries through to the handling. And yes, it would be nice to know a bit more about what the front tyres are doing, but can you remember a recent hot hatch with truly good steering?

So yes, while this is a test of a road car with no road driving in it, that's no bad thing. The 308 GTI is a far more capable and interesting track car than you might have expected and, while not as fresh as some of the opposition, is absolutely worthy of consideration in this sector. It's more fun than a Golf, more subtle than a Civic and, well, more available than a Megane - that should be a fascinating comparison when the five-door only Renault Sport arrives later this year. For now it continues to deliver an intriguing alternative to the rest, and comes highly recommended.