ABT's attentions have delivered a 350hp all-wheel-drive wagon. Is it as good as it sounds? 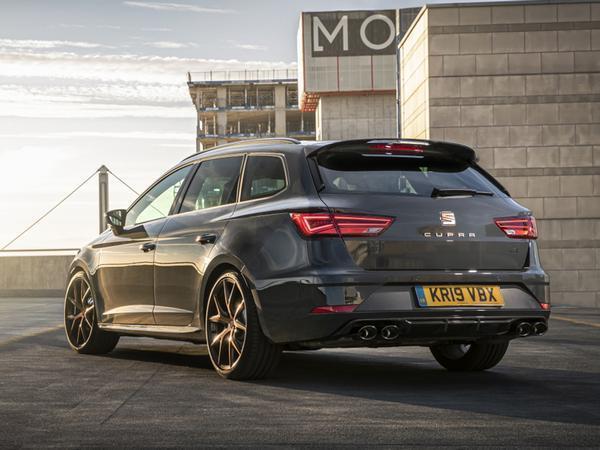 You may recall that we drove the limited-edition Cupra R ST back in the spring. Brisk, talented and likeable was the verdict, even if we baulked at the £37,975 asking price. That car didn't feature the ABT tuning pack though, a modestly priced upgrade of the ECU and exhaust system which brings about 350hp and 325lb ft of torque. This one does, and it's safe to say that the warrantied extraction of an additional 50hp and 30lb ft qualifies as a virtual no-brainer tick.

That's despite the fact that (as is standard with these things) the ABT badge on the boot lid comes with another sticker, this one applied to the inside of the fuel filler cap which makes it clear that 98 and not 95 RON is now the ST's drink of choice. You'll have to make your peace with that, obviously - although we're willing to bet that anyone already minded to shell out for the most expensive Leon available is probably not the sort to fill it with lesser grade petrol in the first place.

Either way you can expect - in the daily grind we optimistically term 'everyday driving' - very little difference in actual fuel consumption. By and large that's because the software tweak seems to have mostly left the throttle map alone, certainly in the 'Comfort' drive setting at any rate, which means that middling inputs are still met with the sort of unexceptional response that clearly has one eye fixed on halfway respectable gas mileage.

In the long run the compromise is understandable; probably welcome. But it does mean that ABT's fettling is not the sort to grab you by the lapels the second you turn the key. What you get instead, somewhat predictably given the amount of work actually done, is a moderate enhancement of the Cupra's familiar strengths. Which means that once you've prodded past the throttle's are-you-sure phase (or slotted the gear lever into its slightly hyperactive S mode) there's a perceptible uplift in the EA888's already generous mid-range - delivering the sort of turbo-induced, wind-in-the-sails pay-off that makes going faster in the real-world so much easier.

This has the likeable effect of making the Cupra R seem livelier when you're only partway invested in what's actually happening. Step up your involvement - typically by selecting the gear ratios yourself with the engine in 'Cupra' mode - and the wagon doubles down on its first impression. Third and fourth, hardly slouches in standard format, now feel like they possess fairly senior B-road clout. Naturally it all gets a bit subjective with no baseline on hand, but the additional yield at higher engine speeds seems fairly unequivocal - ditto the enthusiasm for getting there. In its element, the breathed-on Leon feels properly quick.

More importantly, it feels better, too. Matt addressed the R's chassis overhaul the last time around (essentially new uprights in the front suspension assembly, wider tracks and additional camber all round, and recalibrated adaptive dampers) and the result is no less impressive in the UK. In its previous incarnation the Cupra-badged estate ranked as competent in an uptight sort of way, but not much else. Now there is a genuine sense of Golf R-style poise to its broader stance, armed as it is with a leaner turn-in and a chassis better able to manage deflections under load.

Granted, you don't sit back and wonder at the cohesiveness of it all as you do in the current Honda Civic Type R - the Leon's steering is still a little on the detached side and ultimately there's a limit to how much infantile fun you can have - but generally speaking it corners neutrally and well, enjoys a surfeit of grip and feels entirely suited to its uprated output.

In short, it's the best Leon you can buy. Which is as it should be because with the £500 ABT pack fitted the Cupra R costs £38,475 in the UK. But look at it this way, you can't configure a Golf R wagon anymore - and the Octavia vRS Estate or new Ford Focus ST are lesser powered kettles of fish. It would be an overstatement to suggest that Seat has delivered a cut-price alternative to the Audi RS3 Sportback or Mercedes-AMG A45 because they remain comfortably in the league above, and the Megane Trophy or Type R are more interesting to drive.

But somewhere in between all that lot the 350hp ST offers a usability bandwidth not really found anywhere else. Which means that arguably its pricing isn't too far wide of the mark, not for something limited in number anyway. Also, leaving aside the mildly silly wheels and copper-coloured 'R' extras, it's an unimpeachably good fast estate at heart. And who doesn't love them?