Is the third generation Leon Cupra the car to restore SEAT's auto emocion?

It's always nice to be surprised in the automotive industry. Cars like the

, with its 5.0-litre V8 when a turbo was predicted kept everyone on the ball and shows that conformity isn't totally rife. Fortunately or unfortunately depending on your outlook, the new 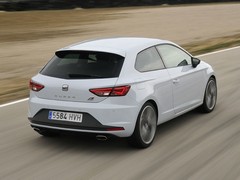 That sounds like damning it with faint praise, and it really shouldn't. Given its

underpinnings, the Leon Cupra should be very good indeed; that it is therefore a highly capable car shouldn't come as a shock.

Because of some rather wild palette options on the colour charts, it's easy to forget that previous Cupras haven't been that outlandish to look at. With no yellow or green or orange yet available, the Cupra is simply a nicely proportioned, modern and attractive hatch. A Cupra 265, bereft of the 19s, black mirrors and spoiler of the 280, actually looks fairly innocuous. Whether subtlety should be SEAT's job when Skoda apparently fills that niche in the VW Group is another matter entirely.

Lack of emocion?
The inside is broadly similar; remove the different dials, the great new wheel and a couple of badges and it's a standard Leon cabin. Not bad, quite pleasant in fact, but not exactly inspiring. 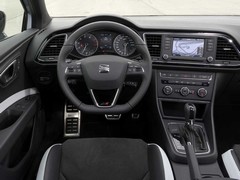 Function over form continues inside

But this is PH! If there's one place that values engineering over aesthetics it's here. So thanks SEAT for prioritising the

and the adaptive dampers over a feast of carbon trinkets or suchlike. It's much appreciated.

Out on the roads around Barcelona though and it's the engine that dominates first impressions. The torque figure may be identical to the 220hp Golf at 258lb ft, but that extra 60hp is particularly noticeable at higher revs. It pulls with real enthusiasm and a desire for revs right round to the limiter. But because the delivery is so linear, the Cupra lacks a crescendo to its performance. It's pulling with the same ferocity, potent though it certainly is, at 4,000rpm and 6,000rpm. There's no doubting the Leon's power or effectiveness, but there's no great emotional involvement. Regardless of the Driver Profile selected the noise remains fairly bland also.

No surprises
Switching Driver Profile also adjusts the DCC dampers through their three modes of firmness. Unsurprisingly (there it is again), impressions were similar to those of Chris's in a DCC-equipped GTI; there were incremental, discernable gains in body control without a ridiculous increase in harshness through each setting. Even Cupra mode isn't entirely unrealistic on the road, although Sport is probably the best compromise. 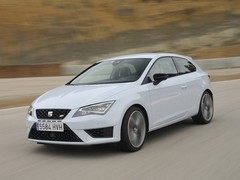 Cupra's quick on track but not great fun

What none of the modes offer is an ideal steering response. Even with the additional weight of the Cupra setting it's a little too light and lacking in the kind of feedback you really want in a 280hp front-wheel drive hatch.

That's until the diff starts to do its thing. It elicits a few tugs and a much better sense of connection with the front axle as the torque is redistributed and the Cupra launches itself away from another bend.

But much like the Golf (again), the diff's behaviour can be quite unnerving on both road and track. Hydraulically actuated but electronically controlled, it's that fraction of a second that the electronics take to react that can undermine confidence as the understeer continues but instinct says to keep your foot in. It's that split second where the RCZ R and Megane 265 feel so devastating as the diff hooks up and eliminates understeer. In the Cupra the push comes first and then the diff responds; it's effective eventually but a little unsettling, and makes establishing a rhythm difficult. 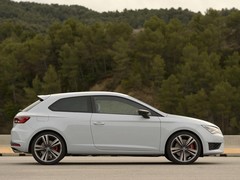 Furthermore, any attempts to combat the nose-led balance with a lift are largely fruitless. The front will tuck in but there's none of the mobility and adjustability from the back axle that makes a Megane such riotous fun. Non-switchable ESP compounds the problem. That's more understandable in the Golf and Octavia in particular, but shouldn't the SEAT option be just a little more expressive?

In it to win it
There can be no complaints about either gearbox choice though. The DSG is faultless, as we've come to expect. But unless circumstances force an auto, the manual is definitely the best transmission. It's not the shortest shift, but it's light, accurate and quick. Much like the Golf in fact. The pedals are well positioned too, making heel and toe downchanges brilliant fun with that revvy engine.

And on spec issues, the 265 is probably the one to have. On the Castelloli track in a field of 280s, the 265 easily held its own, unsurprising given the insignificant deficit. And there's fun to be had, albeit in a rather formal manner; you admire the speed and the grip without every feeling involved with, or truly taken by, the experience. 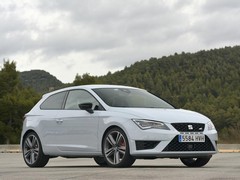 Fast and great value; this Cupra is like any other

But to conclude that the Leon Cupra is bad because it's too similar to a Golf GTI would be churlish and, more to the point, incorrect. The formula of offering near-as-dammit all the Golf's attributes in a better value package with extra power has proved so successful in the previous two generations of Cupra, so why alter it now? With the Golf arguably on better form than ever, it makes the Leon Cupra a very good and highly talented hot hatch, predictable though that summation may have been.