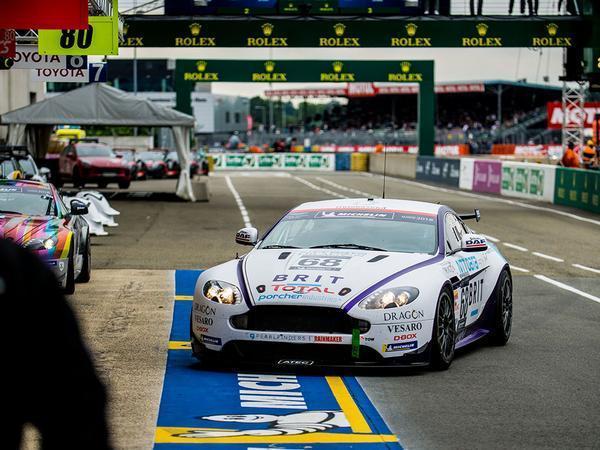 Team Brit is not a conventional race team. Under the mantra of 'The Most Inspirational Team in Motorsport' and the tutelage of CEO Dave Player, Team Brit races exclusively with disabled drivers. With everything from amputation to paralysis and PTSD and other mental health issues able to be accommodated, the team aims to use sporting achievement to inspire those who have suffered. The ultimate goal is to field an entirely disabled line-up of drivers at the Le Mans 24 Hours; the team well on the way, having already raced at the Aston Festival this year and Britcar rounds. Having read testimonies from drivers involved, and checked up on some very impressive results on the website, PH went along to experience Team Brit's impact first hand at MotorsportDays Live last weekend, with an opportunity to drive its V8 Vantage GT4 car.

On the face of it, the Team Brit Vantage looks like any other previous-generation GT4. Looks a lot like the one yours truly deposited in the Paddock Hill gravel a couple of years back in fact. But, because it's designed for disabled racers, this car is a little different to others. Foot to the floor? Pedal to the metal? No need here, everything can be operated entirely by hand.

Now, obviously not all disabilities are the same, so it can still be driven on the pedals - say, for example, by those racers who only have the use of one arm - but it's the hand controls that are of most interest. At Silverstone, commercial director Mike Scudamore is the man to explain how the wheel works - a big paddle on the right to accelerate, an equivalent on the left to brake, and two rocker switches either side to go both ways through the gearbox. Al Locke details the engineering work which, quite frankly, sounds like a mammoth task even with a paddle shift car - Team Brit's BMW 116 racer is a manual, incredibly enough, and has won four of this year's races. Because not only has there got to be sufficient feedback and range in the paddles to be able to accurately modulate GT4 performance, there are hydraulic, electronic and electrical systems to think of as well.

After some time in the sim trying to get familiar with driving that takes no fancy footwork at all (actually simpler than it sounds), it's time for the real thing. Where, naturally, that feeling of confidence vanishes. Team Brit hot shot Bobby Trundley is in the passenger seat, fresh from winning all those 1 Series races and having proved very quick already in the GT4; all is going well as we teeter forward and join the track session queue. Just pull the paddle for first and away we...

Thought that might happen. Turns out it's quite a big squeeze applied to a paddle thinking it's for a gearchange, the huge flare of revs from the V8 confirming to all around - poor Bobby included - that I'd pulled on the right hand side for very nearly full throttle. And not first.

After that, the first couple of laps are taken pretty gingerly. The Vantage is as joyous as it always was: loud, fast, raucous, rewarding and forgiving. Just not as fast as anything else circulating, because I'm scared of making another mistake. Removing your feet from the driving process is like holding your cutlery in the wrong hands, or walking everywhere backwards; not physically demanding, just requiring a fair bit of thought because you're so used to doing things one way.

But as with the sim, there becomes a point where driving Team Brit's GT4 with just fingers and thumbs makes eminent sense. And while it would be nice to attribute that to driver skill, the real triumph is in the engineering work that makes metering out more than 400hp - as well as the braking performance of those huge discs - through three digits on either hand feel so natural. This can't have been the work of a moment; the progression, accuracy and response of those paddles is superb. Revs are chased more eagerly, there being faith that the amount of throttle being asked for is exactly what will be applied, while braking points become later as confidence builds. What was initially quite a binary process around the circuit - brake in a straight line here, turn the car, accelerate the car, all to minimise confusion - very quickly becomes a lot more cohesive and flowing as the meticulousness of the build becomes clear. Still slow, sure, certainly judging by how much we continue to be overtaken, but less of a mobile chicane than before.

Indeed, so confidence-inspiring is the Team Brit set-up that the power is applied a little too early out of one of Silverstone's hairpins... Although luck rather than judgement probably saved the spin, it again says much about the precision of the hand controls that the throttle didn't have to be entirely closed to remedy the situation. The speed and commitment comes back down a bit after that, but it's very easy to imagine very quickly matching lap times put in using conventional controls with this GT4. Which is perhaps the best vindication of Team Brit's work you could hope for.

The fact that this overhaul is so effective must surely mean that something like parity should be there between disabled and able-bodied racers soon. Because, honestly, this is a GT4 car that can be driven just as quickly and as confidently as any other, just without any requirement for your feet. Some feat indeed (sorry, couldn't resist). And if this sort of technology means more people can be involved with motorsport, representing different backgrounds and realising different ambitions and potential, then that has to be good news. Team Brit might be a new name to you, as it was to us; on this experience, however, expect to hear plenty more soon enough.