If PH is going to embrace electric cars they may as well be fast and good looking, right?

When reviewing a car we usually work on the basis the infrastructure is in place to support it. OK, so that may involve monosyllabic cashiers, confectionery based temptation, diesel on the soles of your best pumps and - of course - considerable expenditure. Better the devil you know though - it does at least work.

But just imagine you've put the fuel nozzle into the neck of your tank and pulled the trigger. No fuel. Click. You roll your eyes, look up at the cashier's office for the approval and await the welcoming whirr of fuel being delivered. Still it doesn't come. How long do you give it before tutting? Beep your horn? Walk over and bang on the glass?

How would you feel upon doing that to be given a shrug and told "we'll call you back"?

Much as we wouldn't rate a regular car on the relative scuzziness of our chosen filling station, it seems unfair to kick off a review of the Tesla Model S moaning about its charging infrastructure. But sadly for the Model S this first impression of electric motoring is hard to untangle from the experience of living with it.

Entry criteria
Given this limited initial exposure a few things are very clear. If you're lucky enough to have off-street parking at home and/or a dedicated parking space at work at which you can install a charging point it's viable. If neither are available you're at the mercy of public charging, which basically means flaky plug-in posts possibly located some distance from where you need to be, cards that don't unlock them and 0845 'help' lines that seem unwilling or unable to fulfil the promise of their title.

Meaning sticking with the dino juice isn't yet a lifestyle choice for the belligerent hardcore with petrol in the veins. 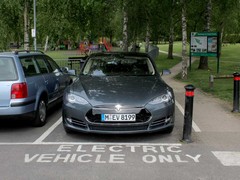 Dedicated parking handy were it not for 20min walk

Right, so that's the boot into the infrastructure. What about the Tesla itself?

A breath of fresh air, in short. PH has reviewed electric cars in controlled environments before but this is the first time we've actually lived with one in the wild. Others have said it already but the Model S has to be up there with the Model T, the Beetle and the Mini in terms of significance. Begging the question how the hell has the combined might of the existing industry been so humiliated by a free thinking Californian start-up?

The Model S is an odd mix of the revolutionary and the conventional. Tesla had the freedom to make it look like some sort of sci-fi transportational pod but its relatively conservative looks are actually very clever. It has a grille but no radiator. It's shaped like a regular car. The controls are familiar - basically there's nothing to freak you out. Under the skin it uses off the shelf components bought in from suppliers to provide fundamentals like steering, suspension, braking and other stuff that'd be costly and time consuming to develop from scratch. 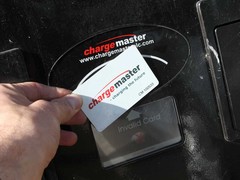 Mercedes switchgear provides your point of contact with the car from a driving perspective, pressing the brake and pushing the column shifter into D all that's required to wake the car up. With the creep mode enabled releasing the brake is all that's required to move away and, well, that's it really. Right pedal to go, left pedal to stop and don't try left foot braking unless you want lots of outraged bonging.

With no noise, vibration or other distractions from the power source to contend with you end up focusing on the control inputs you do have. The power steering is adjustable for weight, seemingly light, direct and not especially feelsome in any of the modes. The height-adjustable (optional) air springs have a slight choppiness to them but NVH levels are very well contained, especially given the lack of mechanical noise to drown out background clatters and thumps.

The long wheelbase keeps you on an even keel over speed bumps and if not entirely serene it's certainly effortless, credit due in no small part to the slick calibration of throttle, regeneration and braking. We're only in the early days of the electric car and already a fledgling company like Tesla has nailed this on just its second attempt - deeply impressive stuff. 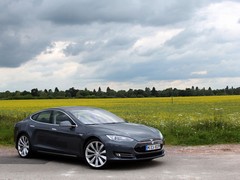 Even in muted grey the Tesla turns heads aplenty

So acclimatisation to the basics of driving take very little time indeed. And in stop-start city traffic and on the motorway it'd be easy to forget you were in anything other than a sleek, refined and luxurious saloon car with start-stop and an automatic gearbox. Which is both very clever and also revealing of how little attention we actually pay to motive power in this context. Could be diesel. Could be petrol. Could be a combination of either with a bolt-on electric motor. Mainly it's a stylish conveyance and one that turns a surprising number of metropolitan heads. Where did this mainstream awareness and recognition come from?

Novelty value
On the automotive arteries then the Tesla feels entirely at ease and the novelty of its propulsion falls into the background. But when you get off the beaten track it gets a whole lot different. The way it picks up speed is, frankly, quite eerie. Turning onto a familiar B-road and watching it turn all blurry without any punctuation of gearshifts or sensation of mechanical effort is a quite unsettling experience. 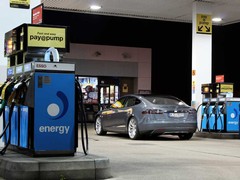 With the standard 60kWh battery you get 0-60mph in 5.9, 302hp, 324lb ft and 120mph. Upgrade to the 85kWh and you get the same torque, 362hp, another 5mph and five tenths off the 0-60. As tested with the 85kWh Performance battery it's a more impressive still - 4.2 to 60, 130mph vmax, 416hp and 442lb ft. We all know the maximum torque from no revs thing on paper but each serious squeeze of the Tesla's throttle is nothing short of astonishing. You'd be impressed at any car this size gathering speed in such a way. But the lack of accompaniment, the fact you can do it with the sunroof open and still hear birdsong if you choose is, frankly, quite weird.

The Model S's dimensions give it inherent poise and stability; the damping and steering do an adequate job of keeping it all in check through direction changes, if little more. The Performance Plus upgrade includes 20mm wider rear tyres, larger diameter anti-roll bar and other suspension components which probably help. Again the throttle's intelligent calibration is evident. It could have been tuned to send heads thwacking into seats on every twitch of the right foot but there's smooth 'damping' to the initial step-off and a predictable - if constantly amazing - response to more demanding inputs. The level of regen when you come off the pedal is adjustable but even at its most aggressive it's easy to get used to and the brakes are rarely used for anything more than coming to a halt. 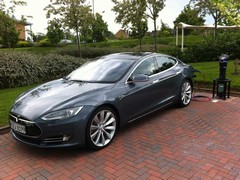 So if you drive the Model S like that is there any chance of achieving the claimed 312-mile NEDC range? Possibly. Driven 'normally' a 200-mile round-trip to Coventry taking in town, B-road and motorway driving was a good test and though a charge point was used at the destination the S would've completed the journey comfortably without any compromise in driving style or nail-biting range anxiety.

The promise of a midnight 20-minute walk home from the public charging point meant hoping there was enough left for the 45-mile journey into the office the next day. And rather more interest in using regeneration to avoid a long and ignominious hike from the hard shoulder of the M25. Never has start-stop traffic been such a godsend.

Tesla is smart enough to realise that the lengthy charge time of its large-capacity battery (one hour equals 68 miles via most public chargers) and the flakiness of the public infrastructure is going to remain a significant hurdle for many and is working on a network of 'superchargers' that will enable owners to follow major routes across Europe with strategically placed hook-ups. If they can be coordinated with bladder/caffeine requirements all will be sorted.

Even with this and the decent range it's going to be a while before a Tesla - or any electric car - can honestly rival internal combustion rivals for convenience and usability. But the fact it comes so damned close this early even with the limitations of the current support network is nothing less than astonishing. That it does it with considerable style even more so.