makes is, frankly, nearly as bonkers as how fast it goes. Every tiny movement in the throttle pedal unleashes new and exciting whooshes, squeals and chuffs as the turbo loudly broadcasts your level of commitment.

It's great that Zenos has pinned the character of the hotter E10s on this turbocharged power delivery too. Every exciting car needs its own distinctive noise signature, be that the demented shriek of supercharged Atoms, the throttle-bodied high-rev howl of bike-engined Radicals or pop and crackle of normally-aspirated Caterhams.

And the noise the Zenos makes is very informative about how it drives. Yes, there's momentary softness to the throttle pedal and handling that you don't get in some of the competitor product. And then a thrilling rush of boost and acceleration that'll have your head struggling to keep up. 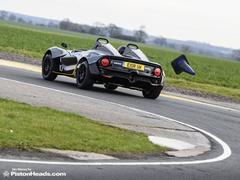 From the start of the Zenos experience we've said

had the potential to handle a lot more. With 350hp and a power to (dry) weight ratio in the order of 500hp per tonne the R challenges the Zenos to deliver on the promise. Our

revealed fearsome but usable power delivery, even less than ideal conditions; a second one not so long ago that the additional pace was placing the set-up under sharper scrutiny.

Specifically the significant gain in performance over the £32,995, 250hp E10 S and subsequent increased approach speeds revealed a propensity to lock the front brakes into corners, the car driven here benefitting from a number of detail but important set-up tweaks. These include spring rates increased by 10 per cent front and 20 per cent rear, new brake pads, a new brake master cylinder and revised pedal ratio, plus a tweak of the brake bias towards the rear. Zenos boss Mark Edwards also says the engine map has been updated to "production intent" with additional modifcations to improve intercooler efficiency and intake system.

Chances are you'll have spotted the lack of a roof, screen or weather protection and, as tested, the R's focus is very much toward fair weather plaything. Pays your money and takes your choice and all that but, assuming that's not a barrier, the starting price of £39,995 still looks strong value for money against comparable cars like the Vuhl, Atom, X-Bow and pending £82K Lotus 3-Eleven. 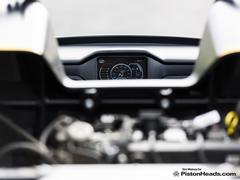 It's perhaps not as exotic in its finishing details as some of these cars. But the overall look remains distinctive, appealing and purposeful, especially in the 'Charged Graphite' colour scheme of this £43,995 Drive Edition. This also bundles in adjustable Bilstein dampers, quick-release wheel, carbon seats with six-point harnesses and a black anodised spine and will be offered in a limited run of 15 cars. Whatever the spec the body looks flat, wide and purposeful but the skinny tyres and glimpses of the pushrod front suspension through open body elements hint at lightweight minimalism, rather than the aero-led racer vibe of some rivals. Fundamentally this is a car for enjoying yourself in, not fixating on sector times.

You'll have seen we've also had recent experience of some obvious Seven-shaped rivals, the comparisons as predictable as they are unavoidable given many of the Zenos crew are former Caterham men. We came tantalisingly close to getting the R on track alongside the 620S too; sadly it didn't happen but given just a few days separated our drives the Zenos was fresh enough in the memory.

There's no escaping the emotional pull of the Caterham either, even taking into account a 620S starts at £44,995 so carries a £5K premium over the Zenos. It's, rightly, an iconic machine with a character all of its own. But Sevens are not for everyone. Some simply won't fit, there's no denying the exposure if you have a big shunt and if you've owned a few you may simply be looking for something different. The Zenos addresses many of these concerns while tapping into the same mindset - little surprise when its creators have such direct experience. 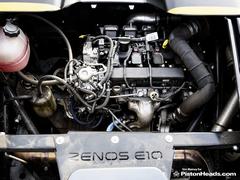 At the wheel it certainly feels a lot more contemporary. There's space for your knees and elbows, your relationship with the chassis isn't quite as intimate (good for safety, if not as conducive to feeling part of the machine) and the basic ergonomics are sound. The R's stumpier metal-topped gearshifter is a subtle but important improvement over earlier E10s too, having a seemingly shorter throw and more positive engagement, plus a more natural alignment with the wheel. Anyone who's struggled for space in the footwell of a Seven will also appreciate being able to select which pedal they hit, rather than accidentally mashing all three at the same time.

Details then but the kind of thing that matters when you're dealing with a car as rapid as this. Because you really, really don't want any distractions.

On or off boost the 2.3 has useful extra mid-range over the 2.0 of the S, rush when the turbo spools up then taking your breath away. With so much power and so little weight the way the R picks up is never less than astonishing, the mapping successfully mitigating the nasty spike you get in regular road car applications of similar engines. There is lag compared with the supercharged motors in Caterhams, Lotuses and Ariels but that's offset by the sheer visceral thrill when it lights up. Indeed, it accelerates so fast you need to be quick with the gear changes to keep up, the improved gearchange and positive clutch helping with the rapid-fire shifts. It helps that most of these will be simple forward and back movements between third and fourth, the torque sufficient that it'll pull from third in all but the tightest corners. 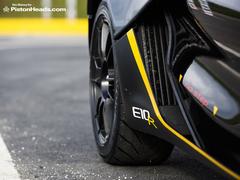 Devil in the detail

In this stock set-up (dampers and anti-roll bar are adjustable) there remains some initial softness in turn-in that matches the similar feel to the throttle. So there isn't that pin-sharp corner entry and ability to instantly adjust the angle of attack you get in a Caterham, nor the sense you steer the Zenos as much with the throttle as you do the wheel. Showboaters may well be disappointed on that score and driving it at pace is more methodical than instinctive. A limited-slip diff might change this bias but Edwards' Lotus background perhaps informs the decision not to go with one; with heat in the optional Avon ZZRs traction is strong and even when you pre-empt the lag and get on the throttle early it's unwilling to do more than gently rotate out of the corner. Think a hint of Ariel madness but with a less psychotic nature and you'll get the picture.

A tighter cornering line can be maintained by trailed brakes or a well-timed lift, the response to both being predictable and benign enough to give you confidence to push hard and enjoy the fundamental balance. The revised brake pedal means heel'n'toe is a little bit of a contortion under heavy braking but, by the same token, it's easy to slide across from a trailed brake and back onto the throttle.

And there is enough adjustment potential in the chassis to play with the balance and make it more pointy if that's what you want. The changes to the brakes mean there's now the reassurance to brake hard and late too, there being a sense the Zenos is willing to step up as your confidence increases. The pedal feels a little softer than the solid set-up in earlier E10s, the initial feel a little more sympathetic to those not attuned to non-ABS set-ups.

Basically all that we already liked in the package. Just more so.