Sam took his Clio and long-suffering girlfriend to Scotland. He'll never be the same again 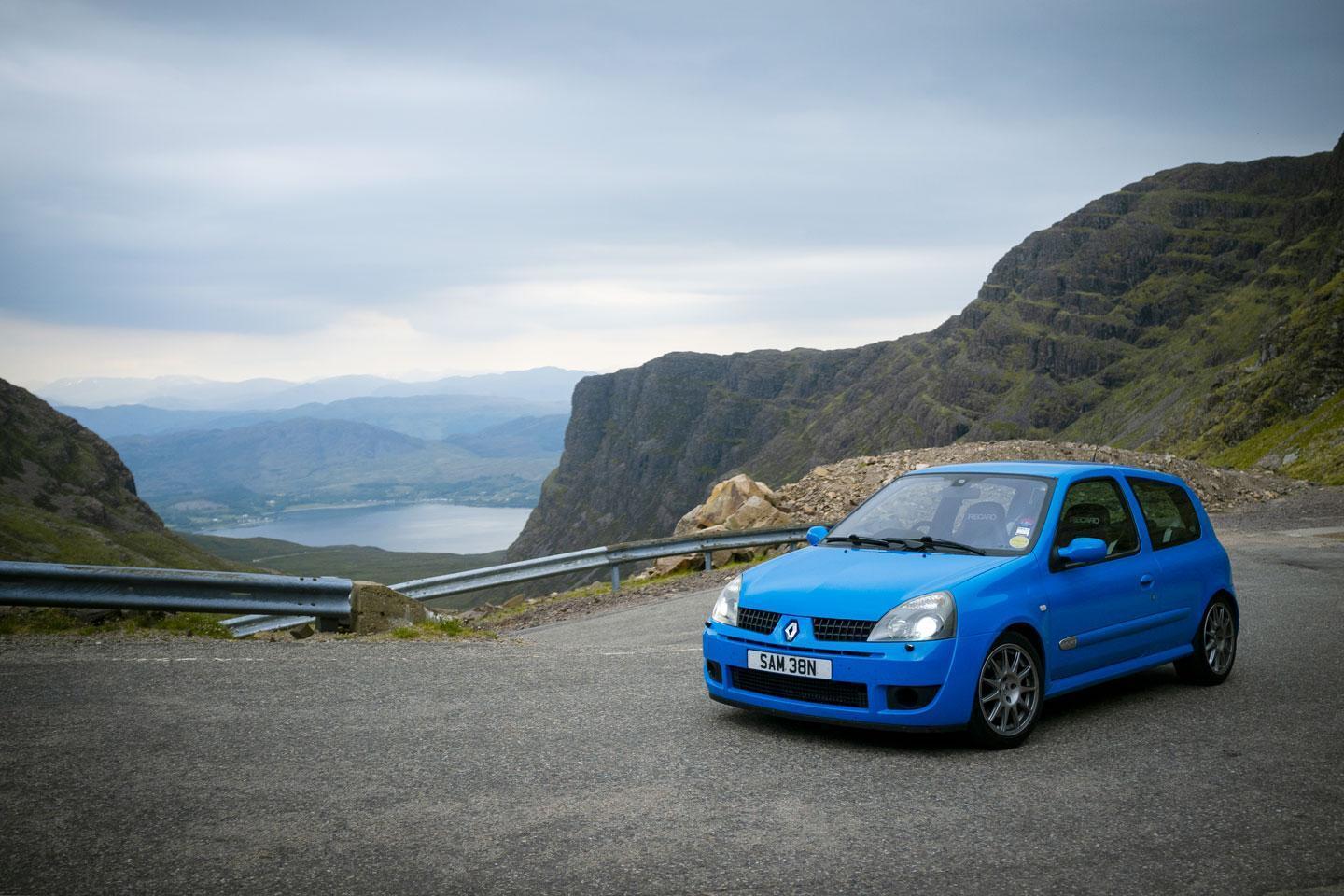 The North Coast 500 is what happens when you bake a landscape on the equator of a baby planet, give it a few million years’ worth of volcanic eruptions, a handful of ice ages and centuries of sea deposits as it migrates north. You’ll need a bunch of upright apes if you want to add an interconnected ribbon of tarmac to flow across your virgin landscapes, but the basis for what makes the northernmost route of the Scottish Highlands so epic is its geological history. It took innumerable millennia to build this journey.

Given my lifelong obsession with driving, and the fact I’ve dedicated my career to it, I’m ashamed to say it’s taken the hindrances of a global pandemic for me to finally dedicate a week of holiday to doing the NC500. But having now done it, I can safely say it’s well worth the effort, even when low-cost flights abroad become a thing again. It packs everything you could want from a holiday centred around (but not exclusively for) driving into 500 miles. Jaw dropping landscape? Check. Lovely, welcoming villages and towns to stop off in? Check. The best driving roads in the world? Quite possibly.

For me personally, this trip carried much more weight than it normally would. Firstly, it fell on the month that marked exactly 10 years since I bought my Clio 182. Hence my decision to use the rattly, 133k-mile hatch for the voyage instead of one of the many comfier, roomier and lower-effort press cars at a motoring journalist’s disposal. And secondly, it was to be my last major trip as a PH staffer after three years of service. I couldn’t think of a better way to mark either occasion than by going back to basics and celebrating my – and possibly your – obsession with driving on arguably Britain’s most famous loop.

So, with the Clio suitably loaded, its pressures set with both economy and oversteer in mind (the rears are up to 39psi now) and Waze aimed really, really northwards, our epic adventure began. After a two-night stopover in Edinburgh, we picked up the NC500 route at its most south-westerly point: the Applecross Pass. What a way to start. Is there a more dramatically beautiful climb in Britain? Or one with more potholes? We marvelled at the scenery and worried about the front struts in almost equal measure.

Mercifully, this is by far the roughest part of the NC500 route, so it makes sense to start the loop this side, if you have an ounce of mechanical sympathy. Because once you’re back down close to sea level, the mostly single-track route eventually becomes smoother and wider, offering a first taste of the sort of winding roads you’d hope to find on Scotland’s northmost perimeter. For a 17-year-old Clio 182, it was a chance to stretch the legs, before we arrived in Torridon – the setting for an actual leg stretch (of the human kind) the day after.

A hike up Beinn Eighe was our first on-foot detour from the NC500 road, enabling us to look down at the neighbouring Loch Maree from the panoramic viewpoint of a peak two thousand-feet up. Everything, from exposed sedimentary layers built up over millions of years to visible scars either side of the valley - which look like they were clawed in yesterday, not tens of thousands of years ago by the skyscraper-high ice shelf that migrated through here – is brilliantly preserved, frozen-in-time as evidence of how the NC500 landscape was built. Suffice it to say it’s a must-do task for those as keen on their feet as they are behind the wheel. Just don’t forget to pack the insect repellent.

As a reward for our on-foot efforts, the meandering coastal road takes in small settlements like Charlestown and Gairloch, and remains well surfaced and picturesque for every following mile. At our next stop-over destination, Ullapool, we hopped on a boat – the Shearwater trip – and travelled towards open sea for a morning of wildlife spotting. We didn’t see any dolphins or whales, but a pair of golden eagles more than made up for it. As did the realisation that Scotland’s off-shore islands have much more in common visually with Iceland than they do with anything in England.

From Ullapool the roads get really, really epic. Smooth, well-sighted and wonderfully varied, you make swift progress in slack-jawed wonder. A 180-ish-horsepower car that normally weighs little more than a tonne is obviously going to feel quite different with a holiday load aboard, but so ingrained is the brilliance of the Clio that it entertained through every corner, remaining resoundingly neutral no matter how overly keen my corner entries were, and punchy when revved out. It felt made for these roads. A faster car we never once wanted.

With the 182’s nose now wearing almost as much wildlife as French Racing Blue, we headed for the long slog towards John o’Groats, taking note of the WWII defences that still litter the roadside and coastline through the once heavily guarded Durness, thought to be vulnerable to attack when the Nazis invaded Norway. Through these parts, you’ll have no trouble spotting the many abandoned and partially fallen down houses that come from the heartbreaking Highlands Clearances of the 18th and 19th centuries.

The roads, landscape and stories keep coming at you in rich, sometimes overwhelming brilliance all the way around to Inverness, our final stopover. Although if, like us, you opt to complete your trip with a drive south through the Cairngorms to experience the Old Military Road, the drama of Scotland’s Highlands feels like it could go on forever. For those who’ve not experienced this stretch of national park road, you absolutely must. Even in an over-loaded Clio that’d done 1,000 miles since it’d left home by this point, it felt like motoring heaven. It made for quite possibly the best drive of my life, and that’s saying something. It’s a real rollercoaster, with undulating left-right-left sections, cambers and even little jumps – and, of course, more breathtaking scenery to fill the windscreen. It was the perfect way to say goodbye to the Highlands.

And the perfect way to sign off from PistonHeads, too. Because what better way is there to celebrate all things PH than getting all giddy about one of Britain’s best roads in my very own car? Rest assured the smiley stickers are staying on the Clio. It’s been a blast.