The best M car you can buy versus the best Cayman ever? Happy Christmas y'all! 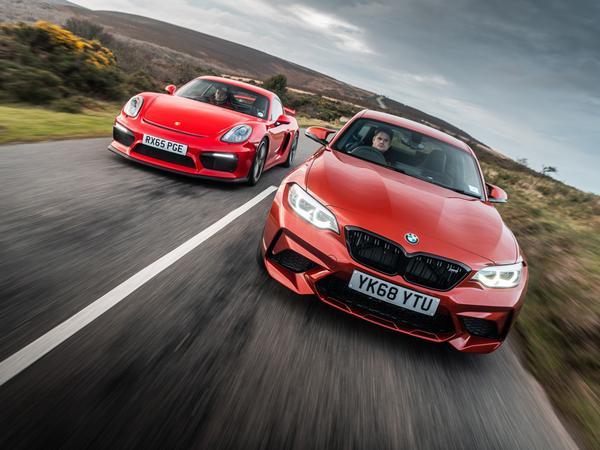 Hopefully these two are cars you know well; after all, both Porsche Cayman GT4 and BMW M2 Competition counter a lot of arguments about modern sports cars. Both have standard manual gearboxes, both have six cylinders, both are rear-drive and both, while not exactly MX-5 sized, are reasonably compact. While you may not love them both (or either, perhaps), it would be hard as a PHer not to admire what the BMW and Porsche represent; namely a focus on driver enjoyment and a conscious rebuttal of too much tech.

Having been so impressed by the M2 in various encounters - see Matt Prior's original verdict for the level of praise we're talking about - this comparison was about establishing just how good the Comp really is. Nothing like setting the bar high to know for sure, is there? We know the BMW is there or thereabouts with its contemporaries, so a six-cylinder Cayman comparison - the very best six-cylinder Cayman, no less - will offer the chance to really prove its mettle. And before there are any cries of foul play, the differences in age, price and layout will be considered - the test was simply too tempting an opportunity to pass up. Finally, the BMW really doesn't have much to lose in this duel: it's not expected to come out on top against a Porsche Motorsport product, but if it does come close it's also the cheaper and newer car.

That said, the M2 faces an uphill battle before it's even arrived, because five minutes in a Cayman GT4 will convince you of little need for any other car. Ever. Putting aside the issues around availability, resale and its impending replacement - easier said than done, granted - this remains a terrific driver's car, one deserving of all the praise heaped upon it. Yes, the gears are too long, it uses 'just' a 911 Carrera engine and people scowl at it like you've run over a kitten, but that shouldn't detract from the GT4's sensational talents.

Weirdly for something so ostensibly focused, it's the Cayman's compromise that makes it so immediately (and immensely) beguiling. Honestly. The boot can be loaded up with stuff, podcasts playing through Bluetooth and coffee in the cupholder as you trundle out of town like in any old Cayman, then all hell lets loose when the situation allows. Pleasingly for 2018 it can be left in one setting to do this, too: so expertly judged is the damping in the PASM's Normal mode that there's little need for any more, throttle response never feels like the embellishment of Sport is required, and the driver aid intervention threshold is sufficiently lofty that disabling them is purely for vanity. Alright, more exhaust noise is pretty cool. Otherwise it's three pedals, one stick and two driven wheels the whole time. Which is rather nice. Four hours to Exmoor? We should have done Scotland...

Before this becomes another Porsche missive though, it's worth reiterating what a gem this M2 Competition is. When the standard car arrived in 2016, it was declared as one of our favourite cars of the year - "A CS could be something really special, too", was the conclusion at the time; while that may still happen, there's plenty to be enthused by with this Competition.

Everything that the standard car did well, this does better; everything that wasn't so great has been, if not expunged, then improved noticeably. The end result is one of the most charismatic, entertaining and likeable cars on sale today, one brimming with M car attitude but tangible dynamic quality as well. When a four-cylinder F-Type starts at £51k, that the M2 Comp you'd actually want - nice paint, heated seats, the brake upgrade - is comfortably less than £55k makes it look conspicuously good value.

Of course, the big news for this Competition is the introduction of the M3/M4 S55 engine, replacing the more prosaic N55 used before. And while it is great, more willing to rev, more responsive to the throttle and more pleasant to listen to, that rabid edge from the senior models is lacking. Maybe it's the missing power, maybe it's having a manual here and only automatic experience in the others, or maybe it's the mapping; whatever the case, that searing energy over the final few revs, the bit that makes that 3.0-litre twin-turbo six feel like a proper M engine, isn't quite there. Bizarre.

While it may be that the Porsche also has an impact on that perception, it could just as well be the M2's additional composure that makes it feel less feral. Those early F80/F82s were a bit of a wild ride at any point, let alone at peak power, an impression that never materialises in this Competition. Instead there's faith, confidence and trust in what the car is doing as the limit approaches, which hasn't always been the case with recent M cars. Bumps that were unsettling previously can be attacked, turn ins made more decisively and the throttle chased earlier, the car and this architecture more capable than it's ever been. And it was pretty good before, really.

That said it's naughtier as well, and that's why the Comp impresses so much  - it improves a lot of the M2, not just one or two areas, and so broadens its appeal. With a punchier engine and more keyed-in set up, plus the existing benefits of an M diff and a great front end, the M2 is only too happy to adopt a more... traditional BMW cornering stance, shall we say. With even more belief in what the front Super Sports are doing, the additional composure and a rear axle now treated to more torque, the M2 is surely one of the best cars on sale for advertising the juvenile perks of rear-wheel drive. Everything off is also the only way to disable the rev matching as well, so you kinda have to...

That's not even the end of it. The BMW never feels as chubby as that kerbweight suggests, the (optional) M Sport brakes are sturdy and reassuring, traction is great, the MDM mode still feels intelligent after all this time... it's a cracking driver's car, this M2 Comp. Perhaps not as groundbreaking as something like the Alpine A110, sure, though fans of traditional M cars - those thuggish, roguish, big hearted Beemers that we thought had been abandoned - should find a lot to smile about here.

It's no GT4 though. Not by a long chalk. Alright, no great surprise there: series production BMW less exciting than more expensive, mid-engined GT Porsche. Still, the gap here is pronounced, and if anything the context of something newer has only served to highlight what a stroke of genius the Cayman is.

Why? It's just such a vivid, engaging, visceral driving experience, delivering the sort of involvement that should remind us all why we love motoring around on four wheels. Driving it after the M2 feels like taking off a ski coat, hat, earplugs and gloves: everything is more immediate, engaging and intense - from steering to pedal feel, turn in to braking - the car challenging and enthralling in equal measure. If anything the ride is more accommodating than the BMW while delivering better body control (the 200kg weight advantage will help), the car more agile as well as more confidence inspiring, traction improved because of the layout and yet the on-limit balance is almost as benign - the Porsche's is an amazing chassis. And that engine - good grief. Plain old Carrera S 3.8 it may be, but in 2018 it's so razor sharp against anything else that the current Porsche turbos feel as energetic as Christmas afternoon. The M2 might as well be a 225d by comparison.

Never, though - and this is the real key - does the GT4 become overwhelming or irritating. You'd happily drive it to a circuit, hammer around all day and then drive home. The balance and compromise between road racer edge and everyday Porsche is damn near perfect, the car as accommodating or as awe-inspiring as the situation requires. Oh alright, a Panamera would be more cosseting down the M3. So would the BMW, in fact. But the Cayman remains fantastic - wherever, whenever.

That fawning - you knew it was coming, didn't you? - shouldn't deflect attention from what a tremendous car the M2 is, however. At no point during our time testing the cars did it feel totally outclassed or outgunned, and let's not forget it has two more seats and costs £20,000 less as a new car than a three year-old Porsche does with less power. And there could be still be a CS to further close the gap. As mentioned at the start, the BMW couldn't really lose here, and it emerges with the clear moral triumph of being perhaps the most amusing and mischievous way to spend £50k on an everyday new car. The best driver's car here is that ruddy Porsche though, by a clear margin; time hasn't diminished the GT4's considerable and captivating abilities. If anything it's more alluring than it's ever been, ageing just impeccably thanks very much, and that makes the little red Cayman pretty damn special indeed.