The M2 has been specifically remade to surpass the Porsche 718 Cayman. Well, guess what... 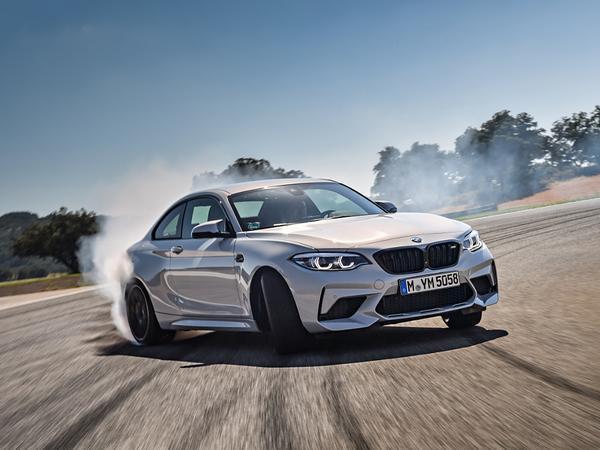 Since the launch of the Porsche Cayman 12 years ago this moment has been unthinkable. A sports car from a manufacturer which isn't Porsche, offering a car for similar money, that makes us think: perhaps, just perhaps, this is the better car. Yarp. Really.

The M2 Competition, then. It's BMW's current-smallest M car, turned more hardcore than the regular M2, as befits the 'competition' tag the manufacturer applies to cars one-rung higher than regular M cars. But such, BMW thinks, is the appeal of this car, that it simply replaces the current M2, rather than both versions being available - though maybe there's cost factor here, too.

Because the changes run pretty deep. Too deep, perhaps, to keep two different M2s available. Most notably the M2's single, twin-scroll turbo straight-six has been replaced with a detuned M3/M4 engine, which has two single-scroll turbos, each boosting three cylinders. Power is up by a healthy 40hp and 62lb ft to 410hp and 405lb ft, which is the start of things. The M3/M4 wishbone-shaped engine-bay strut brace makes its way over, too, as does this engine's additional cooling needs - which explains the bigger vents out front.

This all pushes the weight up by a not inconsiderable 55kg to 1625kg inc driver, fuel and that. (When we road tested an M2 in 2016 it was 1575kg on MIRA's scales, while a 718 Cayman S was 1430kg, and we'd be naïve to think these things don't matter.) So to counter that - and because it feels like BMW has just been inclined to throw quite a lot of effort at this small coupe - the brakes are bigger and the suspension has been revised.

There's not so much in the spring and damper rates or anti-roll bars, but the steering has been recalibrated, as has the stability control, while at the rear there's some rose jointing too. The idea is simple - make it more precise at the front, make the back follow better, and make it easier to drive at the limit. Make it more sports car, less hot rod. Make it so that the engine isn't the main reason you'd pick one over a 718.

You kinda get the vibe that, with the adoption of that wheezy four-cylinder engine, Porsche revealed a bit of vulnerable flesh between its panels, and BMW has gone at it.

It already had the 718's engine nailed, to be honest, and this only extends the gap. There's a new exhaust (obvs) with opening flaps, plus an incoming petrol particulate filter, and an inline six is so smooth, so zingy, and here, so urgent, only a bit boosty. It's also so biddable that I'd choose a manual over a twin-clutch box, not just because it's a manual and is therefore more engaging but, because, if you can't be bothered to shift that much, it's enjoyable to just let the engine lug things out anyway, such is the spread of torque.

The handling stops short of being transformed, but it's double-digit per cent better than it was, everywhere. (Except, perhaps, in ride quality, which is still a bit insistent on bad roads.) But it steers better, with less communication and slickness than a 718, I suspect, but with really good accuracy and response, which is way better just off straight than it was, and a good enough approximation of feel. Such is the precision, and such is the response in the chassis, that although a Porsche is ultimately more agile (with its weight by the centre rather than the ends, it'll turn more quickly), the BMW is not far away as a sports car.

On the road it's incisive, fast, engaging. Less fluid and oily than a Cayman, I'm sure. But closer than it has ever been, because it's keyed-in, alert, balanced. Closer to a Porsche than an M has been since ... cripes. The 1M Coupe? Earlier? Not entirely sure. A question for another day, but know that it's great fun.

And on track it's great. In higher speed turns there's a bit of steady-state understeer, as there should be. You can quell it using the traditional front-engined, rear drive methods: lift the throttle or trail the brakes, whereupon the M2 Competition reveals its adjustability, and the tight body control on its passive dampers. It's like a miniature Aston V12 Vantage S, in that the cornering line is largely your choice. Safe and secure, wild and hilarious, or anything in between.

The stability control has two stages of off. MDM is half off, and is really good, allowing up to around a quarter turn of 'oppo' on a circuit. All off is all off, after which the M2 is a hoot.

So. We like it. A lot. Is it better, overall, than a 718 Cayman? This being PH I'm spared the indignity of putting a star rating to it and there'll be a chance, I hope, to get them together on the right road and circuit at the same time. But if I were signing off on my monthly payments, right here, right now: for the first time since the Cayman's introduction, I wouldn't make them to Porsche.