UK deliveries start this weekend; here's what those picking up their cars are in for... 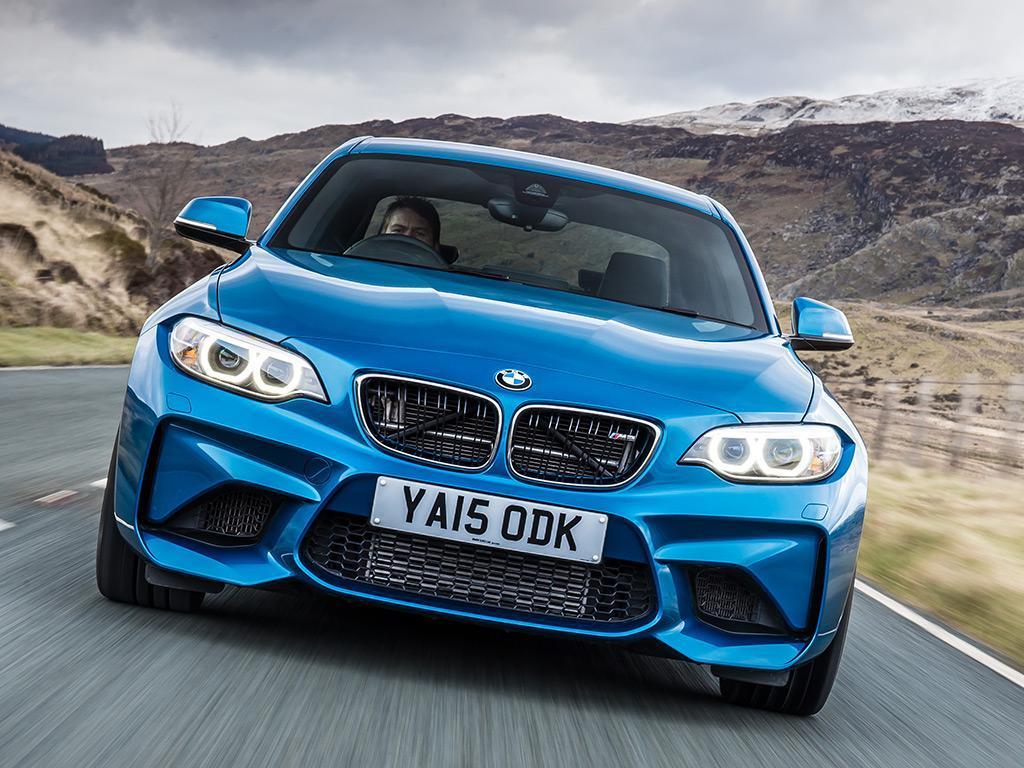 The difference between the M2 and apparently similar cars in the BMW range can be measured in just a few hundred metres of rippled, rain-soaked Spanish tarmac. Right when the stomach-churning lurch out of a high-speed compression should have you feathering the throttle to give the rear wheels a chance of keeping traction...

Civilian equivalents like the M235i simply don't have the damping to cope. An M4, meanwhile, would be well out of its comfort zone and unable to put its considerable power advantage to any use whatsoever, beyond a widening of the eyes and whitening of the knuckles. In the M2 there's not a moment's hesitation. Keep it pinned. Grin like an idiot. Repeat to fade.

How does it do this? Simply, because it appears to have been built by and for people who really, really enjoy driving, sod the numbers on the spec sheet. The money invested in hot-rodding the M235i wasn't lavished on the engine. It didn't go on the interior. It didn't go on slavishly benchmarking acceleration times against rivals and making sure the gearing showed the car in its best light in magazine figuring or lap times. It went on nicking the good stuff in the M parts store like the M4's wide track forged aluminium suspension bits. And then binning the electronic gimmickry that makes its big brother so difficult to read.

This rather feels like the kind of car we thought people didn't make any more. The M2 succeeds where many others fail because it's been tuned to let you enjoy its performance. Not view it as some abstract beyond the realms of what traffic law, social responsibility or simply your own talent permit.

As we discovered on the US launch event the N55 engine is gruff and businesslike but has enough six-cylinder character to stand apart from the four-cylinder crowd. It also incorporates a few upgrades from the 'proper' M division S55 to set it apart from other applications. The single, twin-scroll turbo means a lazier initial throttle response than the more angry and immediate twin-turbo set-up in the M4. But the fact it drives through the same rear axle and Active M Differential reveals the advantage this brings in terms of traction. It's far easier to balance the initial power delivery than the M4, making DSC off progress on slippery surfaces much less anxious.

And DSC off you'll need to be if you want to take charge of the rev-matching duties with the six-speed manual's stumpy little shifter. See the recent rant on just this issue but it seems a little daft that you can't choose an auto blipping opt-out without also forgoing your safety nets. Well, it would be if the M2 wasn't such a hoot to slide around and manhandle without electronic interference. This is not just your typical motoring hack hubris either; the M2 isn't communicative in the way cars of 20 years ago might have been but by modern standards it's remarkably open about its intentions.

The mellower throttle and nicely matched spring and damper rates are very much on your side in this. Keep your foot in over the bumps and you might get a murmur of movement as the wheels momentarily lose their connection to the road. But the passive dampers are much quicker to settle than BMW's usual adaptive equivalents and traction is restored quickly. What would have been a tank slapper in an M4 is little more than a pleasing wriggle through the wrists, with no need to back out of the throttle. This is a good thing!

A benefit of the structural suspension hardware inherited from its big brother is a pin-sharp front axle. Steering weighting is 'correct' rather than brimming with feel but the confidence that the front end will go where you want it just encourages you to carry your speed and get early on the throttle to rotate the car into the corner. It'll showboat as space, denial and tyre budget allow but there's satisfaction in dancing on the cusp of things going properly sideways, safe in the knowledge everything from damping to diff is on your side. It's predictable without being dumbed down, fun at sensible speeds as well as silly ones and accommodating of a broad talent pool.

The gearing and power delivery make sense for fast road pace too. Flicking up and down between third and fourth is plenty for most corners, the engine having sufficient grunt to haul from low revs and make the cross-gate shift down into second unnecessary, leaving you an easy back and forth shift for entertaining cross-country progress. Are you listening Porsche?

Of course the big question will be between the manual and the £2,645 M DCT auto. In comparing M235i to M2 this is a bigger difference, the dual-clutch down a ratio on the eight-speed auto but far snappier in its shift when in Sport Plus mode. On the M4 M DCT seems to complete the package, apparently reflected in a take-up beyond 90 per cent. As it stands BMW reckons it'll be 70 per cent for M2, though the UK product manager admits they are anticipating a slight swing back to manual given initial reviews and the proportionally larger premium.

The paddles certainly encourage a harder, faster, stand-it-on-its-nose driving style. But given the rest of the car is about feedback and fun over outright pace the manual seems the more appropriate to its spirit and gets our vote. And if that contradicts the view the M4 is better with M DCT it underlines the differences in their character.

Against the disappointingly burly 1,570kg kerbweight 370hp and 343lb ft feel just about adequate, the nicely linear power band ending at least 500rpm sooner than you'd really want and tailing off just about where the M4's engine really goes ballistic. Disappointment in that is tempered by the few occasions you ever get to enjoy such talent in everyday use.

At lower speeds the initial pedal bite of the M4-donated steel brakes can seem a little fierce, unsettling the balance if you're not careful. In the way of these things it makes more sense as the speeds rise, offering more to lean against than M cars of old. With real heat in them things get a little more vocal but the pedal remains resolute; whether this remains so on track is something we'll be exploring soon.

Overall the news remains most certainly good with this first taste of UK spec cars on European (if not home) soil. A slightly busy ride and some tyre roar aside the M2 has enough prestige, refinement, seats, gadgetry and boot space to pass muster as a daily car but is entertaining and special enough to be reserved for weekend fun too. There's a wait but BMW dealers are still accepting orders too, UK supply likely reach around 1,900 cars in total. Along with other driver focused arrivals in the market like the Focus RS, Mustang and more, they're building the cars we said we wanted. Up to the likes of us to buy 'em then!