The MX-5 has been around for what feels like forever. There's a good reason for that... 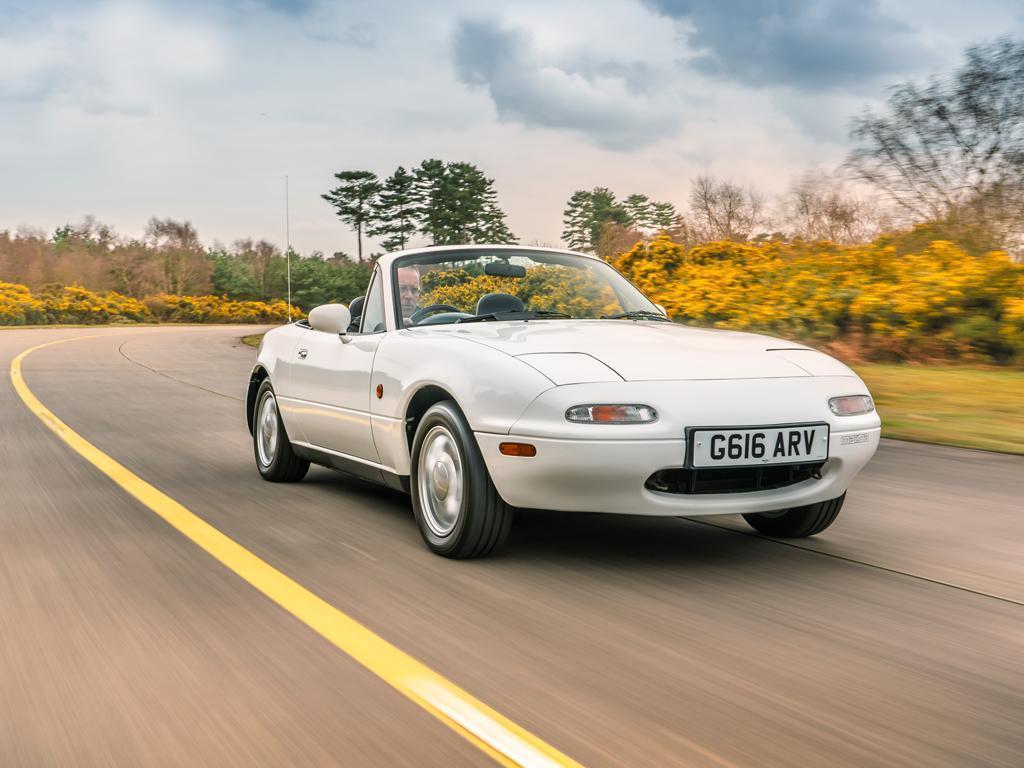 Since the original model was introduced way back in 1989, a shiny new Mazda MX-5 has been sold every 15 minutes. For more than three decades, through wars, scandals, pandemics, uprisings, coups, financial crashes and who knows what else, a new MX-5 has rolled off the production line in Hiroshima and begun its journey to its first owner every quarter of an hour, on average.

For that reason alone the MX-5 has left an incalculable legacy. It’s the niche sports car that went big-time, its reputation confirmed as much by its abundance as anything else. The one millionth example was produced in 2016 – the Porsche 911 needed an additional 25 years to reach that same milestone. No other sports car comes close, at least not in terms of proliferation. If nothing else, the MX-5 has left its mark through volume alone, always there, oh-so familiar, and seeming as though it always will be. Like Starbucks.

But the MX-5 (or the Eunos, or Miata, depending on where you’re reading this) is much more than just common. For 31 years it’s been a champion of affordable motoring fun. I would argue that in that time the little Mazda has done more to promote driving as pastime amongst the masses than any other single model line.

What I find so endearing about the car is that it’s managed all of that not by reinventing a single thing, but by tapping into age-old performance car fundamentals. Even today, the fourth-generation MX-5 calls on exactly the same technical principles as the first – minimal weight, compact size, front-engine and rear-wheel drive, snappy manual gearbox, buzzy normally-aspirated engine, double wishbone suspension.

The MX-5 hasn’t done anything new for 31 years. In truth, not even the original model defined or invented a single thing that hadn’t been done before. Its only scrap of foresight was to recognise what it was about small British sports cars such as the Lotus Elan that made them so enjoyable to drive, namely their lightweight construction and agile handling, and then partnered those attributes with modern reliability and up-to-date safety standards. That applies as much to the current model as the first.

People like me tend to describe the 911 as the most enduring sports car. It’s certainly been around far longer than the Mazda, but in the time the Japanese car has been on sale, the 911’s underlying recipe has changed enormously. It was in 1989, the MX-5 having caused a stir at that year’s Chicago Auto Show, that Porsche replaced the 3.2 Carrera G-Series 911 with the 964. Whereas the MX-5 has changed hardly all in that time, the 911 has grown bigger and bigger again, got heavier, switched from air to water cooling and from natural aspiration to turbocharging, its rear suspension architecture has evolved and its chassis systems have grown cleverer and cleverer.

Meanwhile, the MX-5 is no bigger and no heavier, its basic suspension layout is unchanged and power still comes from an atmospheric engine in the front, through a manual transmission (in the vast majority of cases, at least) and on to the rear wheels only. There has never been and nor will there ever be a more timeless sports car.

The MX-5 isn’t universally adored, of course, not even among driving enthusiasts. I understand entirely. In the case of the current ND version, I think the way the body flips and flops around I corners like a fish on the deck of a boat undermines the agility and balance of the chassis. Others reckon the MX-5 is a lightweight, not in terms of its mass but the punch it packs. I suspect everyone who cares about driving has a view on Mazda’s roadster, but even those who dislike it tend to recognise its contribution to the landscape.

After all, how many of us had our first experience of a rear-driven car in an MX-5? And our first powerslide, intentional or otherwise? Plenty, I bet. I did my first ever race in one and I know first-hand that motorsport rookies all over are still getting their first taste of competition in them. When I competed in an autosolo event on a scruffy airfield in Somerset last year, at the wheel of a borrowed MX-5 bought for only £1000, I didn’t for a moment wish I had any more power, or more grip, or that I was competing in anything more modern or more valuable.

Who would have thought, as these tiny droptop sports cars poured out of the factory gates in 1989, that they’d still be teaching throttle control and steering technique to people halfway around the world 31 years later? More than anything, I think the MX-5 has demonstrated, or even proven, the everlasting appeal of a performance car that’s affordable to buy and fun to drive, and not unnecessarily complicated or overladen with gadgets.

In all that time, the Mazda will have emboldened and inspired product planners within car companies the world over to green-light affordable performance cars of their own, without question. How many sports cars owe their existence at least in part to the MX-5? We’ll never know, but I bet it’s many. I would put the Toyota GT86 and Subaru BRZ firmly on that list, perhaps along with the Alpine A110. The MGF, too, and maybe, at a push, smaller hot hatches like the Ford Fiesta ST as well.

If the MX-5 hadn’t spent three decades reminding car company executives that plenty of us do still love a back-to-basics driving experience, I suspect many of the cars we adore now wouldn’t have seen the light of day at all. Its legacy is one we should all celebrate.