Thought 100hp per litre through normal aspiration was now only the preserve of hypercars? Think again... 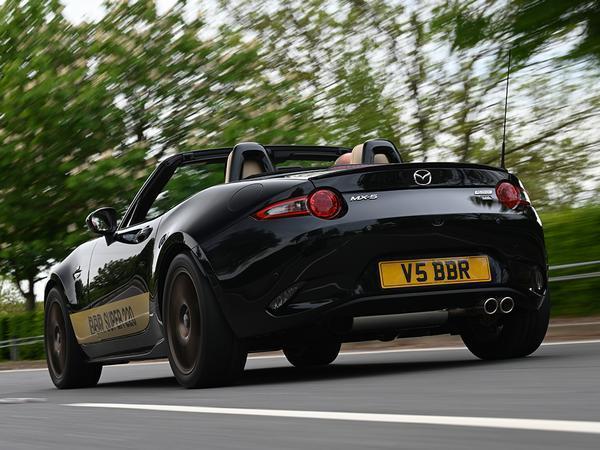 If the BBR Super 220 MX-5 isn't the answer to everything, then it's gotta be close. Just as importantly, it addresses so many of the gripes that many of us have with modern fast cars. Which the Brackley Mazdas always have done, really; thing is that now, as carmakers strain to deliver entertainment through excess, from hot hatches to hypercars, so the perennial appeal of a moderately tuned MX-5 shines ever brighter.

Fed up with the takeover of torquey turbos? This Super 220 makes peak power at 7,800rpm. For those who think an MX-5 is too gutless for them, consider that on manufacturer figures it delivers 10 per cent more torque than standard and weighs the same - its power and torque to weight are comparable to an S2000, yet within the constraints of modern tolerances. And not those of 20 years ago. Those inured to the (considerable, it should be said) talents of hot hatches are getting a front-engined, rear-drive, manual sports car with a limited-slip diff from the factory. Those worried about entry-level Porsches wearing tyres wider than armchairs and E63s the size of Maybachs ought to delight in a car less than four metres long, with 215-section tyres sizes on 17-inch wheels. Anybody who's suffered drive mode anxiety, been wrecked with angst about whether that road will have been better in that setting instead, should find much to enjoy about a sports car with only traction control to adjust. Between on and off.

The Super 220 is the latest BBR product to use Mazda's much lauded Skyactiv-G engines as a base. In this instance it's the facelifted Mk4's 2.0-litre unit, the one that produces 184hp and which impressed so much under the bonnet of our longtermer. To that BBR adds a new 4-into-1 stainless steel exhaust manifold, a StarChip ECU calibration and a cold air intake system (which comprises the Super 200 package), then has also developed new valve springs, retainers and racier cams for the S220 tested here. BBR's numbers indicate 224hp at 7,800rpm and 166lb ft at 4,350rpm...

It makes sense, therefore, to detail what those changes are like for starters. (You'll likely have noticed the chunkier Wilwood brake calipers, the punchier stance from the new springs and the OZ wheels, but we'll get to those.) First things first, this absolutely still feels like an MX-5 engine; indeed that's BBR's aim, to retain the usability and drivability of stock and inject a bit of edge. Creating peaky, temperamental, obstinate tuner specials is not their game. So it idles and potters around like any other MX-5, albeit with more of a rasp from behind thanks to the new back box.

It doesn't erupt in some 'just kicked in' style fashion once extended, either. Instead the Super 220 charges harder through its mid-range, pulling with a conviction that belies its modest torque gain, and then revs - really, really revs. Too many engines nowadays feel done by about 6,000rpm, so it's a real joy to feel this MX-5 get quicker and quicker, seemingly with every revolution, as it screams towards 8,000rpm. The pipes ensure a proper soundtrack, too, a cammy bark evolving into a metallic howl that wouldn't sound out of place on a Best Motoring video. So you'll slow down and do it again.

Performance has taken a noticeable step up, too, from what was already a pretty sprightly little roadster. Rip through every gear and it feels not far off the latest generation of hot hatches, though very different in character with little more than 50 per cent of the torque. Against a standard MX-5, the additional twist gives it extra maturity and flexibility, meaning sixth never has to be left on a dual carriageway, and fourth works just fine to haul you from a 30mph zone to national speed limit. Of course, this being an MX-5, the manual is wonderful to use should you wish - and it's very much to be encouraged - though the added muscle of the Super 220 package shouldn't be ignored. It means the car can be both more relaxing when required as well as more exhilarating when the moment takes, which is quite a feat.

And the rest of it? Again, BBR's mods are very cleverly chosen. Because what there is as base product, lest it be forgotten, is a 1,000kg sports car with its mass evenly distributed fore and aft, front wheels steering and rear wheels powering. It's the ideal foundation from which to build something a bit zestier; make it turn with greater conviction, grip the road harder, brake that bit better, deal with bumps more convincingly and you're onto a winner - so that's exactly what BBR has done.

All that's different for this MX-5 versus the one in a Mazda showroom is a set of BBR performance springs, four-piston Wilwood front calipers (with pad and fluid change) and OZ Ultraleggera wheels on Goodyear Eagle F1 tyres. They are sufficient to alter the MX-5's personality from one of likeable, entertaining roadster into a sorted little sports car. The springs mean the 220 doesn't lurch like the regular car, so even though the tyres are providing more grip than the standard Bridgestones (and therefore more speed), there's additional confidence in the car's behaviour. The rubber (and perhaps wheels, to a lesser extent) contribute a more immediate turn-in, too. And while there's nothing wrong with standard MX-5 brakes, once the firmer pedal and more connected feel of this set up have been experienced, it'll be hard to go back.

Which kind of sums up the entire Super 220 package, really. The Mk4 MX-5 is currently better than it's ever been, and deserves all the accolades it receives. It's very easy to imagine buying one and being very happy with it. But that would never, ever last after driving this car. Because here is everything that's great about the MX-5 package, tangibly improved in those areas where it seemed there was room for it - faster, naughtier, more exciting, more dynamic. Some will shirk at spending this sort of money on the Mazda - £3.5k fitted for the Super 220, then another £3k without fitting for the other bits - but there are ways to counter that.

Firstly, you're going to have a set of springs, plus the wheels and tyres, to sell on and offset the cost. Secondly, NA tuning has never come cheap, and never will - those who'd rather remap a Golf R will continue to do so. Thirdly, 184hp MX-5s are already available with few miles at £20k. And fourthly this BBR Super 220 deserves comparison, on merit, with any performance car you care to mention at £30k or so. Yes, even though it's 'just an MX-5'. It makes the front-engined sports cars seem stodgy, a 718 Boxster seem strait-laced and most hot hatches needlessly complex. Now more than ever we should be advocating the benefits to all and sundry of small, light, efficient yet exciting cars, and currently it's hard to think of anything that extolls those virtues better than a BBR'd MX-5. Bravo, guys.