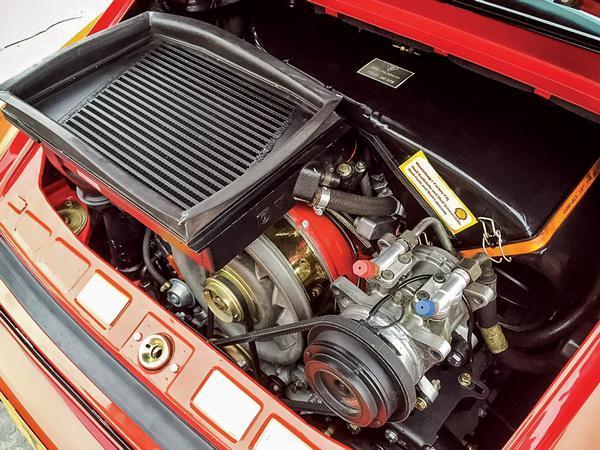 Even though seemingly somewhat ahead of the curve, given that the internal combustion engine was in its infancy, it was a logical step. After all, it was understood that getting more air into the combustion chamber meant more oxygen was present - so more fuel could be burnt, producing more power.

Using forced induction also provided a workaround to issues such as overly small valves, resulting in a considerable focus on supercharging. By 1902, Louis Renault - one of the founders of Renault - had already patented a clutched engine-driven supercharger. This type of forced induction was effective but efficiency was not its forte, as to be driven effectively it often required considerable power.

Engineer Alfred Büchi, born in Switzerland in 1879, had become interested in the concept of improving engine output and efficiency. He studied machine engineering in Zurich and, after graduating in 1903, moved to Belgium to work with stationary engine company Carels Frères.

While there, he aided in the development of a gas turbine. This project reputedly failed but Büchi then set about applying his experience with turbines and compressors to diesel engines, which were becoming increasingly prominent in industrial and marine applications.

His knowledge in this field led him to explore ways with which to recover energy from the exhaust gas of an engine. If this waste energy could be put to good use then the engine itself would become more efficient and powerful; Büchi consequently developed and applied for a patent for such a system, which featured an exhaust-driven turbine, in 1905.

This is often cited as marking the invention of the turbocharger - a compressor which, instead of being mechanically driven by the engine, is instead driven by the engine's waste gases. Büchi's initial patent did not represent such an innovation, though; instead, it describes what we would now recognise as a force-fed 'turbo-compound' engine.

The supercharged radial engine showcased in his patent did indeed feature a compressor and an exhaust turbine - but these both shared a common shaft with the engine, with the compressor being mounted in front of the engine and the turbine behind it. The turbine would recover waste energy from the exhaust gases and drive the shared shaft, instead of simply driving a standalone compressor. Nevertheless, this patent outlined many of the principles of turbocharging.

Büchi then joined industrial equipment and diesel engine manufacturer Sulzer Brothers in 1909 and, in the same year, reportedly proposed the concept of a standalone compressor-turbine unit. His forced induction systems were the key to boosting the output of Sulzer's diesels so, in 1911, the company opened a specialised 'turbomachinery' research department.

Büchi was not alone in pursuing exhaust-driven compressors. French engineer Auguste Rateau, who specialised in developed and manufacturing turbomachinery - ranging from blowers for steel mills through to steam turbines - was in hot pursuit. Rateau, who had registered the rapid development of aircraft, realised that their increasing altitude would result in power tailing off as the air density decreased.

Consequently, in 1917, he proposed and patented what he described as an air compressor operated by the power remaining in the exhaust gases of the motor. 'My invention contemplates means whereby the power of the motor may be maintained,' said Rateau, 'at any desired constancy while operating an aeroplane at varying elevations.' Rateau's turbochargers are claimed to have been fitted to some Renault aviation engines, and flown, in 1918.

The US was also exploring this new technology, again in order to offset the degradation of engine performance at higher altitudes. Having recently entered World War I, and motivated by Rateau's developments, the government drafted in gas turbine specialist Sanford Moss in late 1917 to develop a suitable set-up for the new Liberty 'L-12' V12 - an engine which was hoped to outperform everything else on the market.

In 1918, Moss strapped his newly assembled turbocharger - then referred to as a 'turbosupercharger' - to the 350hp, 27-litre Liberty L-12. It was promptly carted to the top of Pikes Peak and proved its mettle; at 14,000ft the Liberty could produce a peak of almost 380hp, whereas in naturally aspirated form it would produce some 230hp at the same altitude.

Then, on 18 September 1918, Major Rudolph Schroeder flew a turbocharged Liberty-engined Packard Lepere LUSAC 11 to a new FAI World Record altitude of 31,020ft. For comparison, a twin-engined and supercharged AEG G.V had peaked at 20,000ft during trials in July. The Liberty-engined biplane would later exceed 40,000ft and, by 1922, turbocharged production engines such as the Napier Lion W12 began appearing on the market.

Engineer Earl Sherbondy, one of the founders of the Simplex Manufacturing Company and an expert in engine technology, had also predicted the necessity for turbocharging in the aviation market. Independently, he developed turbochargers that were similar to Rateau's. These seemingly went little further than a few trials in 1917 and 1918; Sherbondy did, however, later develop myriad turbocharger-related systems - such as aftercoolers, wastegates and duplex turbocharger configurations.

General Electric, which employed Moss at the time, ran with the concept of turbocharging wholeheartedly and - in collaboration with the US Army Air Corps - developed a substantial portfolio of turbochargers. The outbreak of World War II caused a surge in demand for improved high-altitude performance and outright speed from fighters and bombers alike, necessitating more and more powerful aviation engines - and development was rapid.

GE turbochargers were soon tucked into the nacelles and noses of several aircraft - including the B-17, B-24, B-29 and P-38. These setups were often compound, working in conjunction with an integral centrifugal supercharger; development culminated in the likes of the twin-turbocharged, supercharged 28-cylinder Pratt & Whitney R-4360-51VDT Wasp Major. This 1.8-tonne, 71-litre behemoth produced a staggering 4,300hp.

The development of the jet engine soon curtailed interest in turbocharged, supercharged or compound-charged piston aviation engines. Fortunately, the technology had already transferred to yet another domain - automotive. Moss had reputedly tinkered with turbocharging for automotive applications in the early 1920s; in Germany, a turbocharger had also been fitted to a formerly supercharged Mercedes-Benz and, by the late 1930s, production of turbocharged diesel trucks began.

After the war, the battle-proven and output-improving concept of turbocharging began being adopted by numerous diesel engine manufacturers. Cummins drew much attention to the technology when, in 1952, it entered a turbocharged 6.6-litre diesel race car in the Indy 500. It secured pole position in qualifying, devastating its petrol-powered opponents, and also clocked the fastest one-lap average of 139.1mph. Debris from the track ultimately clogged the turbocharger's inlet during the race, though, and the car was sadly forced to retire.

Countless people were experimenting with turbocharging by this point but it took until 1962 for the first production turbocharged cars to arrive. General Motors had been busy developing smaller and more efficient cars, with downsized engines, including the likes of the Oldsmobile F-85 and Chevrolet Corvair. These were a direct response to the increasing threat from frugal overseas offerings, such as the Volkswagen Beetle.

Customers were still clamouring for more power, though, so - in order to avoid hikes in displacement while maintaining efficiency and competitiveness - Oldsmobile and Chevrolet decided to adopt turbocharging. The result was the Oldsmobile Jetfire and the Chevrolet Corvair Monza Spyder; the Corvair was unveiled in February 1962 at the Chicago Auto Show and the Jetfire followed shortly after, with it being introduced to the public in April at the New York Auto Show.

The Jetfire borrowed Buick's 3.5-litre all-aluminium V8 - the engine which would later become the Rover V8. It was also used in the standard F-85 but, unlike that application, in the Jetfire it was topped with an AiResearch T5 turbocharger. The net result was a stout 215hp and 300lb ft but Oldsmobile had retained the still-heady 10.25:1 compression of the naturally aspirated variant. A modern Focus RS, for comparison, has a compression ratio of 9.4:1.

Consequently, in order to ensure the survival of the motor, Oldsmobile had to equip it with anti-detonant injection- which fed a 50/50 mix of distilled water and methanol, called 'Turbo-Rocket Fluid', into the engine to help cut in-cylinder temperatures and reduce the chance of detonation.

Oldsmobile's turbocharger system, unsurprisingly, proved finickity at best. Reliability issues and a lack of power when the ADI was depleted meant most customers simply resorted to having the turbocharger removed in its entirety, reverting to natural aspiration in an effort to avoid future issues.

Chevrolet took a far more sensible approach with the turbocharged Corvair, dropping the air-cooled, 2.4-litre flat-six engine's compression ratio from 9.1:1 to 8.0:1. This was also perhaps a move necessitated by the lack of cooling overhead, which could exacerbate detonation, given the air-cooled nature of the Corvair's engine. All in, the flat-six engine put out a reliable 150hp and 210lb ft - and it needed no ADI system.

Even though the Corvair was unveiled prior to the Oldsmobile, the Chevrolet offering was an option pack - rather than a standalone model, like the Jetfire. As a result, many often cite the Jetfire as being the first turbocharged production car. Complexity and reliability issues resulted in the turbocharged Oldsmobile being killed off in 1963, at any rate; the force-fed Spyder lasted until 1966 but a lack of interest in the model meant the entire Corvair line was ultimately discontinued in 1969.

Turbochargers continued to make headlines in motorsports applications and, not long after, the likes of the 1973 BMW 2002 Turbo, 1975 Porsche 930 and 1978 Saab 99 Turbo rekindled interest in turbocharging. Numerous brands rushed to adopt turbochargers and the 'Turbo' badge - and the performance the systems granted - quickly became a sought-after commodity.

Even frugal types could soon get their turbocharged kicks, with the official introduction of the turbocharged diesel US-market Mercedes-Benz S-Class 300SD in May 1978. Before long, turbocharged engines were offered by countless manufacturers - and, today, a new engine without a turbocharger is a rare beast indeed.