As the Ateca departs, time for its toughest test - the family fight! 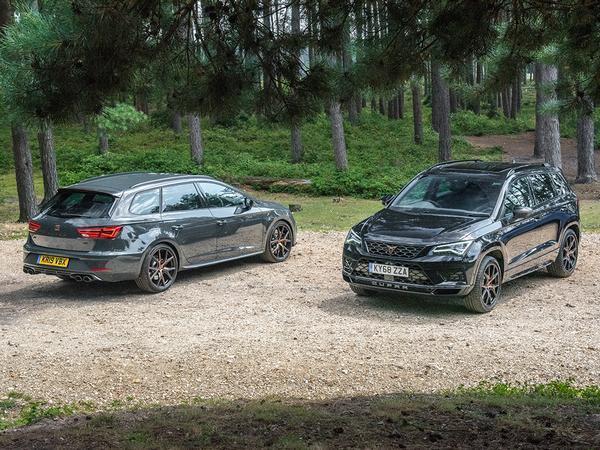 So the Ateca's time on the PH Fleet has come to an end. But before it bows out, an opportunity has arisen to put it up against the car that many a petrolhead would select ahead of it if given their choice of Cupra'd machine: the Leon Cupra R ST.

Not just any Leon Cupra R ST, in fact, but one fettled by German tuning outfit ABT, which has managed to free up an extra 50hp and 30lb ft of torque for an additional outlay of just £500. For £38,475, then, buyers can now get a 350hp, all-wheel drive estate with a 587-litre luggage capacity - 1,470 litres with the rear seats down. That makes it a good bit cheaper than the £41,175 they'd have to pay to get behind the wheel of our 300hp, all-wheel drive Ateca, a car which packs just 485 litres of luggage space - although that improves to 1,604 litres with the back bench flat.

To look at, the two are very similar indeed - SEAT's angular design language and Cupra's copper accents immediately identifying them as descendants of the same branch of VW Group's family tree. From inside, the resemblance is even more apparent; with the two cabins virtually indistinguishable from each other, the only noteworthy difference lying in the perspective from which the passing world is viewed.

Once underway, however, the differences start to become more pronounced. Both vehicles deliver their power in the same, familiarly effortless way that the EA888 has been persuaded to do in many of its installations. In the ABT, however, there's an underlying effervescence which makes the Leon's already considerable half-second advantage in the 0-62 stakes - 4.7 seconds vs 5.2 - seem greater still. Its throttle feels markedly sharper and more responsive, reacting to a dip of the toe with barely a hint of lag to catapult the Leon down the road.

It'll disappear off the line, then, and once it arrives at a set of corners it'll be gone for good. As a hot hatch the Leon might not be as engaging as a Civic Type R, as characterful as a Focus ST or as bonkers as a Megane RS, but in fast estate form the sheer ground-covering capability of its no-nonsense approach seems more at home. Fill it with people, stuff, or a combination of the two and get where you want to go - fast. It's by no means the final word in driving enjoyment, but it's several chapters on from the Ateca which, while respectable for an SUV, could never seriously hope to match it.

Which is the curious thing about the choice of the Ateca as a standalone Cupra brand's first - and to date still only - car. It wasn't as good as those Cupras which still fall under the SEAT umbrella before, and with the addition of ABT's extra-sporty treatment, the supposedly sportier sister brand has fallen further behind.

When compared to the standard 300hp Leon R ST, then, whether or not the Ateca represents a more appealing prospect can be put down to something as flighty as personal preference. Stacked up against the 350hp ABT, however, it becomes harder to make a valid argument in the SUV's favour.

The Cupra Ateca is by no means a bad car and six months with it has revealed plenty to like; the sort of benefits which have resulted in the general public flocking to higher-riding, more spacious machines. If it's a hot SUV that you're after, it still represents good value for money - and good power for money - when compared to its rivals, and it certainly gets plenty of attention for buyers looking to stand out from the crowd. Unless ride height is an absolute deal-breaker, though, it just doesn't do enough to dissuade us from our fast estate favouritism.

SEAT's Cup Racing sub-brand goes it alone - is the Ateca good enough?
Spa doesn't seem too far with access to a Cupra
It's good, but is it great?