As expected, the next 4 Series and M4 will get a divisive new look. They're also due with more power 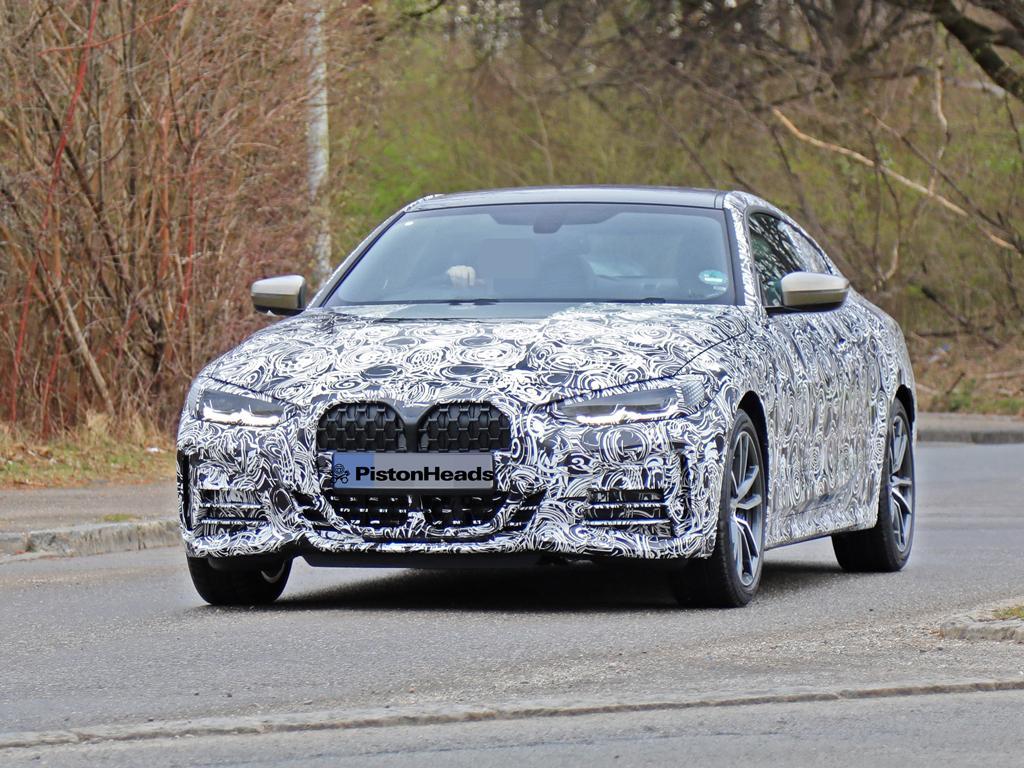 Rumourville has long been predicting that BMW will give its next 4 Series line-up enlarged kidney grilles, but it's only today that we've been given real hard evidence from outside the factory gates. The photographed 4 Series development car, which is the first to be seen with such light camouflaging, sports a pair of massive intakes on its nose, suggesting everything from a 420i to the range-topping M4 will look a bit, erm, rabitty. It continues with BMW's trend of slapping big grilles on absolutely everything, apparently to cater to tastes in some of its biggest markets, so we shouldn't be surprised to see it on the 4 line-up.

But where an X7 has substantial surrounding mass, the 4 Series' thinner profile means it'll almost certainly be the most divisive wearer of the design feature yet. Thankfully, what lies behind is a more typical BMW coupe, with a sleek roofline that blends into what looks to be a fairly understated rear. The spied test car has twin-exit exhausts, suggesting it's something fairly warm - perhaps a 430i - but expect cooking models including the M4 to turn things up suitably. Indeed, we saw an M4 test car with quad pipes and bigger wheels only last month.

Below the M model, BMW is set to give its upcoming 4 Series line-up a sizeable boost in performance, with an M440i xDrive producing an anticipated 375hp from its turbocharged straight-six being the most enticing. That would leave room for the 500hp-plus M4 at the top, while also pulling the models below forward with their own bumps in output. A 430i with nearly 300hp could make for quite the all-rounder in the middle of the range, particularly if it retains the standard fitment of a six-speed manual gearbox and rear-wheel drive.

If the latest G20 3 Series is anything to go by, the CLAR-based 4 Series range should handle pretty well. Even the 320d PH drove a year back had us impressed with its balance and composure at pace; it bodes very well for the 4 Series, which has always been allowed a slightly more sporting focus thanks to its coupe shape. The new platform might even enable some weight reduction compared with the F32-gen 4 Series, which itself has generally impressed with performance and poise.

In short, things are shaping up quite nicely for the 2020 4 range, technically speaking. It's just a shame that those front grilles will undoubtedly remain the main talking point for many onlookers. BMW reckons sales in regions like China and the US benefit from the design, and no doubt there are plenty who prefer brashness to beauty in Europe, too - see the Spofec Cullinan for fresh evidence. But for those not able to acclimatise to that face, it could prove to be a deal breaker. Good thing there are plenty of current-gen examples available in the classifieds...