As you read this PH will (hopefully) be on a plane to go and drive the new M3 and M4. Hard life, etc. To get us all up to speed and get all the number crunching out of the way ahead of those all-important driving impressions here are 10 reasons we're particularly excited to be driving the all-new M...

10 - It's not bound by history or sentimentality
Many iconic cars are, to some extent, locked into their past. As long as there's a 911 it'll have a flat six in the rear, a Subaru's not a Subaru without a boxer engine and AMG is honour and duty bound to fit its C63 successor with a sodding great V8 no matter what. But the M3 isn't quite so hamstrung by history. Over the years it's been powered by in-line fours, straight-sixes and V8s. It's gone from being a pure homologation special born on the track to something more luxurious and rounded. And then, in spirit and special cases, back again. It's been a two-door, a four-door and a cabrio. Core elements remain - it's still rear-driven and recognisably evolved from the everyday 3 Series and 4 Series, albeit seriously pumped up. But this freedom from the chains of nostalgia gives BMW greater scope to choose the best bits for the new car, not just the ones fans with one foot in the past demand as a reflex action.

It's bigger and cleverer ... but lighter too

We'll concentrate on the M4 for a moment and compare it with its outgoing equivalent, the E92 M3 coupe. 56mm longer, there's an additional 51mm in the wheelbase and 66mm of additional width. Track is up by 39mm front and a significant 64mm rear. Given the way things are going and the added complexity of twin turbos and associated cooling and lubrication systems you'd assume a weight penalty. In fact it's significantly lighter; a manual M4 is 83kg trimmer than a manual E92 M3. OK, 1,572kg (by the EU measure, with driver) isn't exactly lightweight but given the complexity and toy count it's not bad and BMW is to be commended for shaving weight wherever possible. The carbon propshaft is 40 per cent lighter, meaning no need for a central bearing, the output shafts from the diff are hollow, carbon fibre is used extensively for body panels, including the roof on both the saloon and coupe (worth 5kg and 6kg respectively) and boot spoiler on the coupe.

8 - There's still a manual - and a reason to have it
Given the way the market is going, from Clio Renaultsports to GT3s, we assumed there'd be no manual option for the M3 and M4. And even debated that in a Tell Me I'm Wrong. Well, we WERE wrong. There is a six-speed manual option - now with rev-matching downshifts - and if you're purist enough to want it you'll be doubly pleased to learn it saves 40kg over the seven-speed M DCT option and is 12kg lighter than the previous transmission. Temptations to tick that M DCT box remain compelling though, not least the wider spread of ratios, gizmos like launch control and Stability Clutch Control (the latter opening the clutch in certain conditions to reduce understeer) and additional improvements to CO2 and mpg. But credit to BMW for at least offering us the choice. 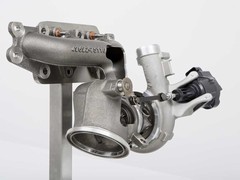 Don't fear the turbo, at least when M's on the case

After the disappointment of piped in engine noise through the speakers and a general lack of soul in its twin-turbo V8 in the M5 and M6 it'd seem the M division has been listening and worked hard to give the M3's bespoke twin-turbo six the kind of character we associate with previous naturally aspirated motors. The two turbos of the M TwinPower Turbo installation are small and geared for inertia rather than diesel-like torque delivery, even if the 40 per cent torque increase to 406lb ft makes its presence felt from just 1,850rpm. In the E9X you had to wait until 3,900rpm for your relatively meagre 295lb ft... This in addition to a 25 per cent improvement in CO2 - 204g/km for the manual and 194g/km M DCT and 32.1mpg and 34mpg respectively. This isn't a low-rev slugger though; BMW is proud to point out it'll rev to 7,600rpm and describes the engine as 'specifically developed for this purpose' with features like a closed deck block and lightweight forged crankshaft to work with the carbon propshaft for reduced inertia and improved response. The turbos keep spinning even when you come off the throttle too, meaning instant response when you get back on it, and an 'indirect' intercooler mounted on top of the engine and concealed beneath the bonnet's powerdome is designed to maintain charge pressure and temperature even under high loads. Meanwhile a baffled magnesium sump keeps oil where it's needed under high cornering loads and the oil supply to the turbos is geared up 'maintain stable oil circulation' in all conditions. In other words the engine and transmission have been designed to deliver on the promise no matter how hard you're driving. Which brings us to... 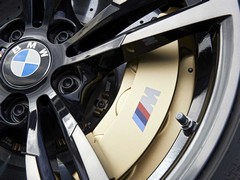 M3 with decent brakes - had to happen one day

6 - It's got decent brakes at last

For some reason a consistent blind spot in previous M3 development. In a world where even hot hatches get branded Brembo calipers BMW really couldn't afford to drop the ball this time round and while we'll have to see how the standard brakes fair on the track there is at last the option of M Carbon ceramics. A £7,395 option on an M5 just don't expect them to be cheap. But for anyone who's driven an M3 on track and had to back off after just a few laps with a soggy brake pedal and smoking pads it'll be a price worth paying. Plus you get blingy gold calipers to let everyone know how hardcore you are. 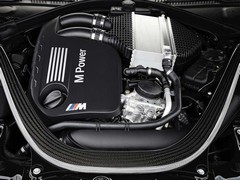 Forget a carbon bonnet - let's have a clear one

True to say, when we specced

we reckoned we'd sneaked an M4 Lite on the sly. Perhaps it was this expectation but the driving experience disappointed, from the numb steering to the underwhelming damping and general vagueness. Clearly the M division has decided it needs clear ground between the M3/M4 and even the top of the range regular equivalents, seemingly going all-out to give the new cars the kind of steering response and feedback keen drivers crave. That beautiful sweeping carbon strut brace - just 1.5kg's worth - is the visual clue to the fight to increase stiffness and therefore response and beneath that the forged aluminium suspension components move on ball joints rather than bushings and have additional bracing and fixings between subframe and body to reduce slack. At the back the rear subframe is solidly mounted to the body, so it'll be interesting to see how BMW has tuned that to generate NVH that delivers positive feedback to the driver rather than annoying vibration and clunks. UK cars also get three-mode Adaptive M dampers as standard, the Comfort, Sport and Sport+ modes also adjusting the weighting in the - whisper it - electrically assisted steering.

4 - PH has specced one and we'll be sharing the fun
As you may have gathered, we've run a competition to spec up an official PistonHeads M4 that'll be making public appearances throughout the summer at various events. There'll be opportunities to get up close and personal with the car and, of course, we'll be writing about it extensively. More on this car very shortly... 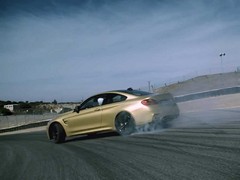 Promo vid confirms it; skids are still on menu

It wouldn't be a proper M3 if it didn't go sideways and since the introduction of the Variable M Differential on the E46 the car's reputation as a drift king has been sealed. Now, we all know going sideways isn't the be-all and end-all. But, dammit, every now and then it's a lot of fun. So we'll draw your attention to this line in the official press release on the car with reference to the all-new Active M Differential: "The M Dynamic Mode - a sub-function of the Dynamic Stability Control (DSC) system - allows enthusiastic drivers to probe the limits of the new cars while retaining an electronic safety net at all times. The system tolerates greater wheel slip and therefore easy drifting." We'd like to think we're enthusiastic drivers. And easy drifting sounds right up our street. Throw in that aforementioned focus on sharper throttle response via the lightweight crankshaft, fast spooling turbos and carbon propshaft and it's all looking promising. At this point we probably need to hand the keys to that bloke Harris... 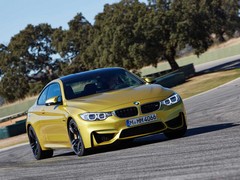 Looks the biz; let's hope it lives up to it

For all the M branded gilding available for lesser 3 Series and 4 Series models there has to be absolutely no doubt when you're looking at the real deal. But at the same time there has to be a degree of need to know; an M3 has to be a car you can drive every day drawing the right attention when you want it and slipping under the radar when you don't. Tricky balance to strike but both the four-door and coupe look to have nailed it. And the spec is generous too, UK cars getting aforementioned adjustable dampers as standard and Ferric Grey 19-inch wheels. Brits also get the full BMW Professional Media, heated/powered seats and mirrors, and front and rear parking sensors. Which, for £56,175 for the saloon and £56,635 for the coupe, doesn't actually sound all bad when you consider the outgoing car started at £54,945 for a manual coupe. 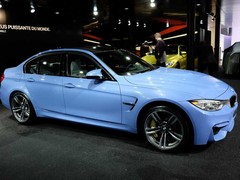 Whisper it but the four-door looks cooler

By creating the 4 Series BMW backed itself into a corner - to keep the M3 name alive it HAD to make a saloon version. And, whisper it, the four-door could actually be the cooler choice, not just because it maintains that celebrated badge. Good as the M4 looks that name still doesn't sound right. And there's something about the way the rear doors accentuate the extra rear track that just makes the saloon look even meaner and more hunkered down...