Frankfurt this year is about mainstream electrification; Brabus is still about twin-turbo V12s... 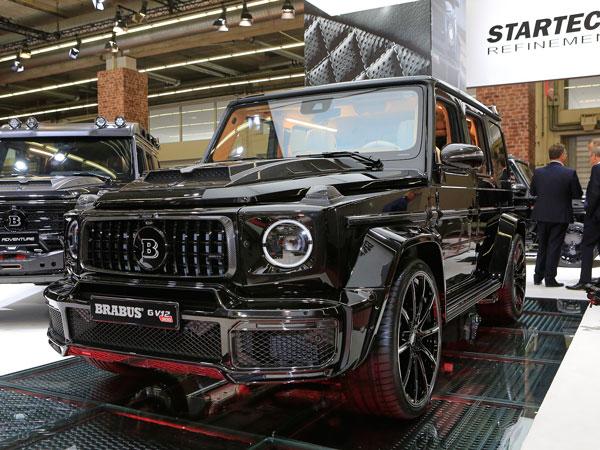 The mechanical specifications of cars from Brabus have always seemed totally bonkers – that’s kind of the point, surely – though they’ve never seemed quite as silly at this Frankfurt show. Here VW has released the ID 3, Porsche the Taycan and Jaguar has teased an electric XJ; Brabus, on the other hand, has stroked a Mercedes V12 to 6.3 litres, added two turbos and dropped it in a W463 G Wagen. Because that’s what Brabus does, and that’s what its customers buy. Welcome, everybody, to the GV12 900 ‘One of Ten’.

Hopefully it's all quite self-explanatory: this is a Brabus G-Class with 900hp, and they’ll make just 10 of them. Further salient details include a peak of 1,106lb ft (albeit limited to 885lb ft to prevent the nine-speed gearbox from capitulation), 0-62mph in 3.8 seconds and a top speed of 174mph. CO2, should it be a concern, is rated at 433g/km. The GV12 weighs 2,660kg and Brabus says it “captivates with its tremendous power and with the exceptional road performance for a vehicle of this category.” You don’t say…

As mentioned, the power gains are achieved through familiar methods for the ‘900’ family of Brabus models: a new crank and larger cylinder bores increase the capacity, with forged pistons and rods to accompany them. The pair of turbos are now larger and boostier than standard, respiring out through 80mm downpipes, freer-flowing cats and a Brabus exhaust. Air coming in is managed by a custom intake module, and all of the V12 fury is managed by an in-house rework of the ECU.

900hp in a G-Class that looked like a G350d would be quite a sleeper, but also not the Brabus way at all. Hence this GV12 gets the Widestar bodykit, adding 10cm to the already broad haunches, and allowing the fitment of some outrageous wheels – up to 24-inches are available, with the largest rear tyres being a 355-section… Still, Brabus says that the revised suspension “is tailored specifically to the axle loads with the 12-cylinder engine”, so let’s hope it can deal with gigantic wheels as well.

Elsewhere, the GV12 is easily identifiable as a Bottrop bruiser, the car a feast of carbon fibre, LED lighting and soft leather – if it ain’t broke, right? Oh yes, and there’s a plaque to mark its special edition status, because a limited run car must not exist without a commemorative plaque.

So, who’s sold? Who needs the world’s most powerful 12-cylinder off-roader in their life, a car that makes a Urus look as butch as a Toyota RAV4? The 10 lucky souls will have to be wealthy, Brabus publishing a price of €605,055 before taxes. But then 900hp never did come cheap – and they’ll probably be sold come October.