PH tries out the newest 911 again - this time in Blighty 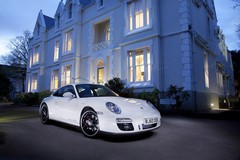 32mm and 22bhp might not sound like the most significant of numbers, but in the land of the 911 they make all the difference.

Those few millimetres are the extra track width of the new 911 GTS and the extra horses it gains over the standard 3.8-litre Carrera S.

There are plenty of other changes that go into making up the GTS, including a standard sports exhaust system, stiffer springs and anti-roll bars, and wider 19-inch rear tyres. In truth, all the little dynamic tweaks have their part to play, but it's that extra width and mildly massaged power output that are the poster boys for the new model. 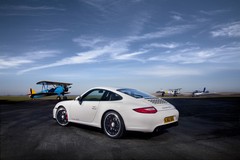 How so? Well, on the gorgeous, well-sighted and often traffic-free roads of the north Dorset downland that Porsche chose as the test route for its UK launch of the GTS, the car felt just perfect.

That little bit of extra width on the rear (not to mention 2mm on the nose) helps the GTS to feel more settled and planted than regular 911s, while the extra power is just enough not to make you yearn for the extra grunt of the turbo. Peak power also arrives a little higher, at 7300rpm, to give you an incentive to really make the flat-six sing for its supper. And it's worth it, because extra air inlets open on each cylinder beyond 6200rpm, lending the GTS a genuinely lovely racing yowl. 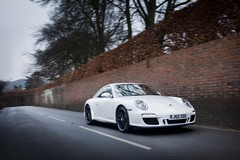 You will most likely only feel this on the (increasingly) rare occasion that you do find a long piece of empty back-road, mind. The rest of the time, the GTS feels like pretty much any other moderately well-specified 911. Yes, the black alloys with their centre lock wheels and polished rims are natty and yes, the Carrera 4 body does mark the GTS out as something a bit special (at least to the cognoscenti), but in everyday driving the GTS feels like any other 911.

But that is almost certainly a good thing. A 911 GT3 or RS model can feel lumpy and bumpy, a bit of a compromise in everyday driving, so those odd occasions (unless you are a committed track fiend) when you can really stretch its legs come at more of a price. In the GTS, however, you'll get 95 per cent of the adrenalin rush on a good B-road run, but with almost no cost to everyday practicality. 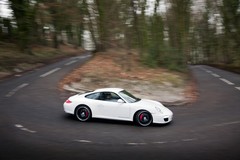 The marketing chap who presented the car to the assembled scribblers talked about how, when you bring together a set of apparently disparate elements, you sometimes hit a sweet spot. I normally try to make it a rule not to listen to the marketing hype in these sorts of situations, but this chap was bang on - the 911 GTS really is the sweet spot of the 911 range.

Okay, so a turbo will have it for outright pace, and a GT3 would murder it on a track, while value-chasers will want to go for the most basic Carrera, but for its ability to balance genuine driving fun with everyday usability - the very thing that made the 911's name in the first place, I reckon the GTS takes some beating.