The biggest change for the 911 since water cooling? Perhaps more significant? PH takes a drive in a turbocharged 911 Carrera

As introductions to the new range of

go, chasing a GT3 RS up a closed mountain road is damn good one. In a PDK Carrera Cabriolet - not exactly the PH choice, granted - there's little time to appreciate the updated PCM, the lightly refreshed dash or the touchscreen. The styling? Don't know. It's jump in, select Drive and try to keep up with the mad man in that magnificent RS. 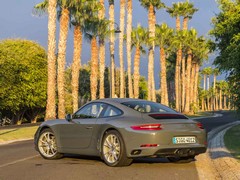 Torque will be a significant, er, talking point throughout this story so let's begin there. Compared to an old naturally aspirated 911, and even as a base Carrera cabrio, this car is notably more potent at low revs. Which is handy when you misjudge a second-gear corner and leave it in third... Where before you'd have immediately gone for the lower gear, now third will suffice and haul you out in a manner previously unknown of in 'base' 911s. The new

engine works best beyond 3,000rpm but it's willing below that and pulls convincingly from less than 2,000rpm. In best road tester parlance it's what would be called a 'flexible' unit, able to pull from low revs but also keen to rev right round to the limiter too.

Yes, fear not; the 911 has not lost its appetite for revs. The delivery is a lot more linear than before, that lovely step up in performance from 4,000rpm or so certainly gone. But it's superbly eager, always prepared to chase peak power at 6,500rpm but crucially run beyond that too. It'll rev right through to 7,500rpm with real vigour. Sure, it doesn't quite zing like the old flat sixes but it's an excellent effort given the constraints of two turbos. Naturally here the comparison would be with the BMW M4, boasting a similar capacity and the same amount of turbos. The Porsche may well rev with more zeal than the BMW, but it would need a back to back to be certain. Whatever the case, there is no need to worry about the switch to turbo Carreras; they're damn good. 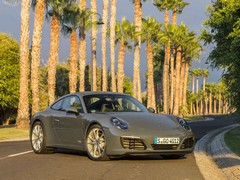 , but would it ever be reasonable to expect that? What it does do is provide a lot of the flat-six growl we love with some interesting turbo gargles and whooshes too. It's certainly a more authentic noise than in the BMW, and a more entertaining one too. It just isn't quite as thrilling as before, sadly.

Anyway, back to chasing the GT3 RS. As we've come to expect from the 991 generation grip, traction and braking performance are way beyond what the average buyer would ever need on the road. While any 911 traits are not patently obvious, neither were they being actively sought out; it seemed a little more important to keep it out of the GT3's spoiler and the shrubbery...

Next day in a manual Carrera coupe there's more time and more freedom to explore. And you know what? The news is good. Yes, it doesn't need anywhere near as much rubber on the road, or the assistance from various acronyms. That's not going to change any time soon. But the electric steering seems better than ever in a 911, detailing a more accurate picture of what the front wheels are doing. The standard brakes are strong, the body control is excellent and the front even goes a little light occasionally on bumpy corner exits. 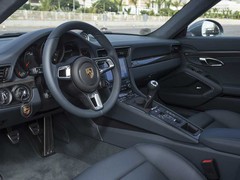 Hang on, what's that sprouting from the dash?

The best news though? The manual is really good. The original 991's seven-speed always came in for some stick (pun intended, sorry) since launch, but now it's updated with a new clutch too and it really works. The six-speed in the Cayman and Boxster remains sweeter, but this shift is now short and quick across the gate, nicely weighted and matched to a precise, well positioned clutch. Even in left-hand drive heel and toe is a doddle; more to the point it's great fun too. There's the standard journalist moan about Porsche's final drive - we saw 125km/h in second! - but keeping a manual and improving a manual should be praised. Not that many will buy one, with around 75 per cent predicted to opt for PDK. But those who will should be impressed.

As for the rest of what's found inside, that may have to wait for a proper UK evaluation. Who wants to mess around with Apple Carplay when there are some amazing roads to drive? What we can say for now is that the repositioning of the Sport and Sport+ buttons to a dial on the wheel works well, the displays are sharp and the touchscreen is very responsive. Which will all be very nice when you're inevitably stuck in traffic and the real-time traffic info can't get you out. 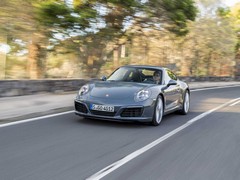 Perhaps most importantly of all though, despite the concerns and worries about the 911 becoming turbocharged, this new car is still good fun. No, it's not the most immersive 911 experience but the standard 991s never have been. What it has done has improved the car in a few key areas while also introducing a pair of exceptionally good engines that we knew had to come. A final note on those too - our launch experience of the Carrera S engine was frustratingly brief, a point we'll hope to address with a UK test. Unsurprisingly given the engine produces another 50hp and 37lb ft at the same revs as the Carrera, it feels much like that engine to drive. Just quicker.

The key is that both feel like very good sports car engines, and that we have nothing to fear about the introduction of turbos to the 911. Yes, they're aren't quite as responsive or exciting as the old engines but given what had to be achieved they're a great effort. To post those kind of performance figures with the official CO2 and fuel economy that they do does (oh, how innocent a statement that so recently seemed) is a remarkable feat. That they do so while still feeling like charismatic, exciting engines is all the better still. While its closest rival - the Audi R8 - has moved onto another price point as V10 only, the 911 looks set to continue its dominance of the sector. Where it sits amongst the sports car hierarchy we'll hope to establish very soon.