Porsche Cayman GT4 - by the numbers

As you read this PH will be out driving the

, details and numbers and other facts so as to permit us the full Queef on 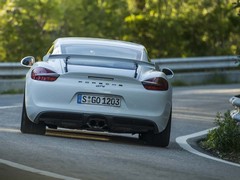 The Cayman grows up!

One number more than any other is probably preoccupying many PHers. Not least those with deposits in at their local Official Porsche Centre, nervously awaiting confirmation of a build slot. To wit, how many is Porsche going to produce?

We put this to Porsche boss Matthias Muller, just moments after he'd revealed the car at the pre-Geneva VW 'group night'. "The customer will decide!" he said with a grin, perhaps not entirely reassuringly for customers who have decided but, rumours suggest, may be disappointed when the first allocation is announced. "It's not a limited edition," he confirmed, "and of course we have some estimations. But we will see the customer reaction." He was willing to talk of production in the thousands though, rather than the hundreds. Another Porsche spokesman we chatted to immediately afterwards was a little more sanguine, admitting that the ultimate decider on production will be capacity and that they may have underestimated the demand. However many are built, it's likely to be a much sought after car and a safe place to put your money.

Assuming you are one of the lucky ones exactly what are you getting for your £64,451? 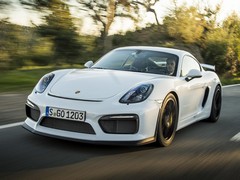 Officially slower than a 911 S. Anyone care?

The 3.8-litre 911 Carrera S engine rotated through 180 degrees and tactfully pared back from 400hp and 324lb ft to 385hp and 310lb ft you probably already knew about. No need to feel short changed though; that's still a healthy jump from the 325hp of the Cayman S and 340hp of the GTS. And while the 911 maintains its senior position in the headline 0-62 and vmax figures (see table below) the 75kg lighter GT4 punches harder in the mid-range. At 5.5 seconds it's four tenths faster than a manual Carrera S by Porsche's measure of in-gear elasticity between 50-75mph. Against an S or GTS it's a whole second faster.

The 7min 40sec Nordschleife time is an interesting one too. Well, for those of us who think it matters. That's not far off the pace of a 997 GT3 or a 991 Carrera S when the latter is fully decked out with active anti-roll bars, active torque vectoring diff and the rest. Interestingly Porsche says the default setting on the GT4's standard two-stage PASM dampers is the 'ring optimised mode and, by extension, the one you'll probably want for 'fast road' use. Sport is, apparently, for "modern circuit race courses".

As we know, the only gearbox option is a six-speed manual - the only notably 'emotional' decision in a spec otherwise honed for lap times and track focus. And one the stick shifters among us will welcome. Blushes for those who can't pull off a convincing heel'n'toe downshift are spared with automatic rev-matching blips. Satisfaction for those who can is maintained with the option to switch the system off. In this age of endless driver modes and configurability it's refreshing to see the only other choices are exhaust volume (track day relevant, possibly) and the customary GT3 style two-stage safety net disengagement of stability off/traction control on and 'you're on your own son' everything off. Putting the power to the road is a combination of a mechanical limited-slip diff running a relatively mild 27 per cent maximum locking ratio and electronic brake-nibbling Porsche Torque Vectoring. 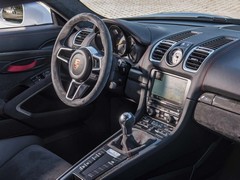 Quite an inviting interior, no?

Now, 'parts bin special' sounds like a pejorative term but, as we all know, some of the best Porsches built - both by the factory and independent tuners - fit this description. And if the parts in question come from the GT3 then few are likely to complain. Indeed, the amount of hardware gifted from the GT3 to its little brother is perhaps surprising. Until you meet GT boss Andreas Preuninger, a man with the air of someone who, when given the green light, doesn't muck about.

So the Cayman gets (larger) GT3 wheel bearings and wishbones up front plus a track increase of 13mm. Additionally there's a drop in ride height of 30mm over a standard Cayman, or 20mm over a PASM car and 10mm over one with the optional Sport Chassis.

The GT3 front suspension parts permit shim-based camber adjustment while at the back there are beefed up anti-roll bar mountings and knuckles. GT3-style 'helper springs' permit decent suspension travel while keeping short springs and low ride height on the competition style upside down dampers. Again like a GT3, the suspension is rose-jointed to the body for maximum precision. 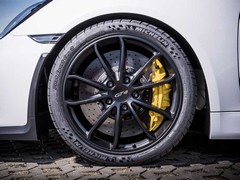 Slam on the anchors

410mm/390mm PCCB GT3-spec discs will be a tempting option for many on the configurator (even at £4,977) but the standard set-up is far from shady. Six-/four-pot calipers grab 380mm rotors all round (50mm/80mm larger front/rear than standard Cayman items) mounted on aluminium bells, saving 'around' 2kg over conventional ones. Guide vanes and spoilers on the front wishbones and new channels at the rear guide cooling air onto the brakes to keep them cool even at maximum attack.

The 20-inch wheels, meanwhile, mimic those of the 991 but use conventional five-lug hubs rather than centre-lock ones. They are shod with Michelin Pilot Sport Cup 2 tyres, as per the - you guessed it - GT3.

The look of the thing gives more than added visual muscle over 'lesser' Caymans too. The GT3-style vent on the top edge of the front bumper helps cooling air pass through the radiators and also helps downforce. To increase this further you can remove inserts from the front diffuser channels and increase the angle on the rear wing, though Porsche says this is for track use only. Bigger side vents, meanwhile, offer a ram-air effect for the engine's induction system. 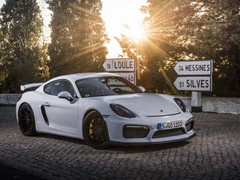 In keeping with the purist ethos GT4 buyers are probably less bothered about interior options than Cayenne buyers pondering embroidered Porsche crests for the headrests or colour matched seatbelts. But there are a couple you need to know about. Maximum track cred can be assured by going for the Clubsport pack of plumbed in extinguisher, harnesses and rear cage for £2,670. The latter can be extended fully to comply with German DMSB competition regs too. You'd also need to go for the £1,907 one-piece 918 Spyder carbon race seats. 18-way electric seats are an alternative for £923, if you must. There's also a £1,085 Sport Chrono package with a Porsche Track Precision app to record your track performance or, if you're really serious, an LMP standard Tequipment beacon-based lap timer using trackside transmitter. Just don't brag about it at the track day briefing, unless you want to be sent home early for illegal timing.

Blimey. Having read that lot you're probably keen to know how the damned thing drives, right? Back to you on that shortly...

Notes: figures in brackets for PDK with optional Sport Chrono package where applicable; all weights EU with driver