A Nurburgring lap time finally confirmed (sort of), but the £30K UK price is assured

Did you know the CR-V is now offered with a 160hp 1.6 diesel and a nine-speed auto? More exciting news from Geneva... A Civic? Ah yes, the Civic.

The big Type R news is the Nordschleife lap time. Honda made a FWD record a development goal from the off and has sent a test car round in 7:50. So four seconds quicker than the Renault and eight seconds quicker than the SEAT. The caveat? No front seat, air conditioning or stereo. This was to offset the weight of the full roll cage, added purely for safety reasons and absolutely not for rigidity. No sir. Not one bit. 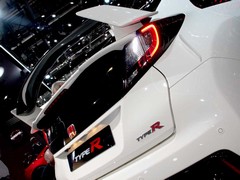 Type R unlikely to be confused with regular Civics

There's some confusion about the tyres as well. Wouldn't be a ring 'lap story without that, would it? So Honda maintains the development car was "in a standard state of engine tune, with suspension, drivetrain, exhaust, brakes and the aero package identical to those of the production Civic Type R." Continental has designed tyres specifically for the Type R but without any confirmation of what they are yet. "The test cycle during which the 7:50.63 lap was achieved was part of the tyre's development and testing process" is the official line from Honda. Curious.

A production car will be there shortly to establish its position as the fastest production front wheel-drive car. Start the debate now as to how production-spec that Civic Type R will be...

Honda has also announced a UK price for the Type R. It will cost £29,995 when sales begin in July, with the GT pack (comprising active safety equipment, Honda's new Connect infotainment system and Garmin sat-nav) costing £2,300 on top. Honda expects Civic Type R GTs to be the most popular model. Furthermore, a PCP payment of under £300 a month has been stated with a 30 per cent deposit and 5.9 per cent APR. For reference a Megane Trophy is £28,930 without the Ohlins dampers and a Leon Cupra with a Performance Pack and the Michelin Pilot Sport Cup 2s is £29,430. Bring on the triple test!