Driving impressions to follow; first some background from the engineers on the technology

The third-generation Honda Civic Type R is FINALLY arriving in showrooms in July, costing from £29,995, and we've had a good poke around the car ahead of driving it on the launch event taking place right now. More on that to follow but we've also grilled the engineers who built it. So, just how much of a tech revolution is the Type R? 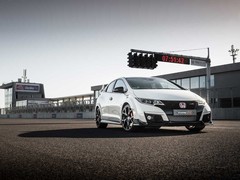 Answer: not a huge one. As ever with Honda, progress comes in incremental steps. That means the specs are tasty if a little over familiar thanks to considerable

. 310hp, 296lb ft of torque from a 2.0-litre turbocharged engine and put to the road through a six-speed manual gearbox. It's front-wheel drive rather than 4WD as the forthcoming

will be, but you get a passive limited slip differential and modified front suspension struts to cope with that power.

We asked the chief engineer (whom we've metbefore), Hisayuki Yagi, why he didn't feel the need to go four-wheel-drive and he told us it went against the Honda philosophy of "mecha minimum, man maximum". Meaning it would rob too much space from passengers. Honda also loathes engineering inefficiency and reckoned the extra power you'd have to add to overcome the weight difference still wouldn't change the Nurburgring time that much. And, yes, these guys are OBSESSED with the Nordschleife. If you're not ... tough! 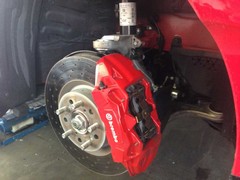 Instead of four-wheel drive you've got a 'dual-axis' front suspension strut like that employed by Renault for the Megane Renaultsport (called PerfoHub) and Vauxhall Astra VXR (HiPerStrut) that adds another fork to the standard Civic's Macpherson strut. Indeed, the

was held up as a benchmark for this car, the chassis engineer told us. Which isn't surprising given this was the car it

around the Nurburgring for the title of fastest front-drive production car.

Essentially this set-up means the damper and spring can go about its business of dealing with the road surface while the dedicated knuckle connection to the wheel hub copes with the steering forces. Honda reckons this reduces torque steer by a very precise 55 per cent. The rear suspension meanwhile is the same twist beam, but tweaked to improve roll rigidity by 177 percent, no less. Power understeer meanwhile is quelled by a helical limited slip differential, again of a type used by the Megane, that Honda reckoned gave it an extra three seconds round ... go on, guess where. 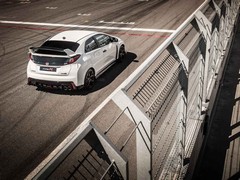 Since we're talking about that track (again), the R button that stiffens the dampers, dials back the electronic oversteer catcher, and reduces the steering assist sets the car up for the Nordschleife. Seriously. "It might be a bit hard for a normal track but for the Nurburgring it's perfect," Honda's German-based tech spokesman said of the R engaged damper settings.

The engine, meanwhile, is the first from Honda to combine a turbo with VTEC, presumably meaning you get a double 'Yo!' (YoYo?) when the two elements kick in. It also has an electronic wastegate that Honda reckons will allow them to control the boost more precisely. It should combine the best of both worlds, given it revs to 7,000rpm but makes peak torque from 2,500rpm.

The six-speed gearbox is refreshing in a world of dual-clutches and Honda reckons it has the shortest shift stroke in its class. Hisayuki Yagi said he chose a manual rather than auto because he wanted to "maximise man-machine engagement" and we say amen to that.

The Type R’s confident aerodynamic addenda are only there to help roadholding and airflow, we’re told. Those vents behind the front wheels push out air used for cooling that would have otherwise slowed it down. What the engineers were very clear on was that elements like that dual rear wing (slightly reduced from the concept) are not there for show. This is purely about go. “This is not a product that has been brought by marketing demands,” says Yagi. “It is a present from Honda to the world, combining the ultimate driving performance with a certain racing DNA.”

Bold words. Read the drive story to follow find out whether they succeeded.