Porsche 911 Speedster due this summer 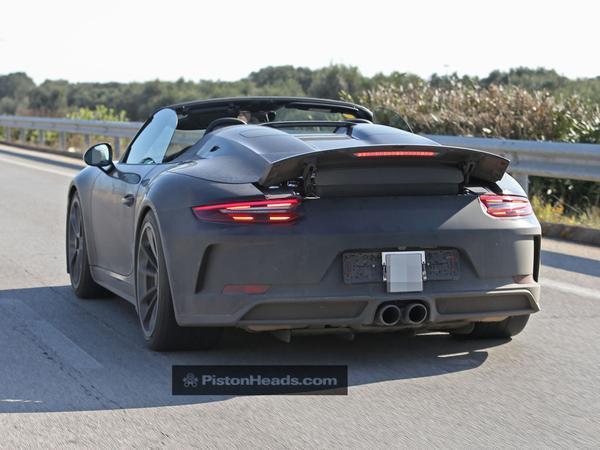 The 992-generation 911 has been with us for a little while now - we drove it last month - but Porsche isn't quite done with the 991.2 just yet. It's still got a special run of GT3-based Speedsters to launch before the curtain finally closes, and new spy pictures suggest we're a matter of weeks away from that happening. Geneva, perhaps?

Whenever it's officially revealed, the model, which was last shown in concept form in October, mixes the high-specification chassis and 4.0-litre flat six the GT3 with a bespoke open-top body that evolves Porsche's classic Speedster form into its most aggressive design yet.

That's helped in part by the inclusion of aerodynamic addenda pinched from the regular GT3, but it's the pair of rear buttresses that really add hunchback-like muscle. The eagle-eyed will also notice a shorter windscreen, smaller side windows and, when it's up, bench-sized active rear spoiler. Pay really close attention and you'll spot the manual gear lever inside, too.

Although we've not yet been provided exact details, we know the transmission comes mated to Porsche's atmospheric 4.0-litre. Whether it sticks with the GT3-spec 500hp and 339lb ft of torque is yet to be revealed - perhaps this limited-run model could be given a little more. Either way, with no roof, Speedster drivers will be able to soak up even more of its absurdly moreish 9,000rpm howl.

As to when the rest of us will have a chance of catching one out in the wild, PH understands deliveries for the Speedster should have started by June. Just 1,948 are to be made.

In one of the less surprising pieces of news to emerge from the Paris motor show floor, Porsche has announced that the 911 Speedster - a car first seen at Goodwood in the summer - will be built next year.

This Speedster isn't quite the roadgoing version, though. Instead this Guards Red 911 is described as the "second Speedster Concept study", now adding 21-inch cross-spoke wheels like an RSR racer and a black leather cabin for a "tasteful and sporty appearance." It's hard to imagine this car looking markedly different from either concept once it reaches production, the press bumf already mentioning the body parts borrowed from Carrera 4 and GT3 to make this show car.

With nothing changed mechanically from Festival of Speed to Paris - this is to all intents and purposes a GT3 manual sans roof - Porsche has now divulged further spec details. It's said that the Speedster will be the first Porsche offered with new 'Heritage Design Packages'; offered under the Porsche Exclusive banner, the accessory packages will "allow for an even higher degree of personalisation for the 911." What that actually means, however, we're not quite sure yet.

Otherwise it's as you were for the summer Speedster concept: shortened window frames, smaller side windows, some carbon panels and that very fancy black chrome and platinum bonnet-mounted fuel cap.

Whatever the finished road car may look like, Porsche says production will begin in the first half of 2019. With a cynic's hat on you'd have to assume that all 1,948 are already spoken for, given this car seems likely to be the last with that 9,000rpm 4.0-litre - though that's merely speculation for now. Should you be after a Porsche Speedster right now though, there are one or two corkers in the classifieds - this one is Guard's Red too!