Give the gift of joy to your fellow man this Christmas, buy a Ferrari

One of the most charming on road encounters I've ever had occurred earlier this year as I was crossing Belgium en route to the N24. As I merged onto the E42 near Liege, a Blu Scozia Ferrari FF came up alongside me. Behind the wheel was a man in his early 40s, in the passenger seat next to him was his young son, and behind them sat the boy's mother and sister. They were all looking across admiringly at the Bentley Continental I was lucky enough to be driving at the time, waving hello with broad smiles painted across their faces. Then, as quickly as they had appeared, the father nodded his approval, dipped his right toe, and they all went screaming off into the distance. If I'd had a Ferrari brochure to hand, that beautifully specced car, and seemingly perfect family, could have driven right off the page. 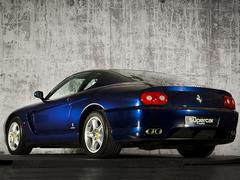 currently command makes recreating that scenario at home a rather difficult prospect. Once you start looking further toward the horizon in Ferrari's rear view mirror however, things become decidedly less expensive.

Which brings us to today's Spotted. And in the ranks of "you can have this... for the price of a..." motoring, it has to score rather highly indeed. For at £40,000 the list of alternatives is as long as it is broad, and none of them sound as appealing as that naturally aspirated V12 would.

Having said that, the 456 is no FF, having always been one of Maranello's more surprisingly divisive creations. The definition of a sleek, simple GT to some; a bland, gappy-wheel-arched lump to others. Whether or not this seems as much of a bargain to you will obviously depend on into which camp you fall. Objectively though, it's hard to argue against. Especially in this spec of beautiful Tour de France Blue with black brake calipers and Nero interior, it's difficult to think of a more sophisticatedly understated combination. 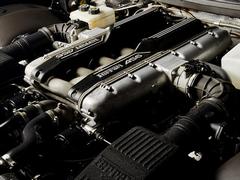 And there's that engine, again. The 5.5-litre V12 develops 442hp, plenty even by today's standards, and enough to make the 456 the world's fastest production four-seater when it launched in 1992. Yes it'll be expensive to maintain, no it probably won't ever become a classic; but this is PistonHeads, and such considerations are superfluous to the irrational joy that cars like this have the power to instill, both in us and in those of a similar mindset who get to see them. So you could spend the money on a

, or you could buy this, and give people like me anecdotes they'll be recalling for months to come every time you take your family to the shops.