Thought things had gone a bit quiet with

? You'd be forgiven for thinking so, given the (qualified) excitement about the

and fact we've not heard a whole lot since meeting

Conspiracy theorists may well roll their eyes and say 'told you so', implying the whole thing was a fantasy from the start. Realists may look upon it more generously, accepting TVR's need to play its cards close to its chest, take a realistic approach and not over-promise as it looks to build a car, business and factory from scratch. 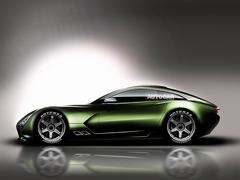 In the background TVR has been quietly showing the car to selected customers and amassing orders, to the point where books for the 500 "fully loaded" launch edition cars will shortly close as TVR gears up for its public unveiling at the Goodwood Revival in September. This in itself is an interesting move, Lord March typically favouring the Festival of Speed for the more commercial activity and big reveals as it evolves into Britain's de facto outdoor motor show. "It is entirely fitting that TVR, as such an iconic British marque, should unveil what will be a very exciting entrant to the global sports car market at our iconic British event," says Lord March of the decision to grant TVR this special privilege. "I very much look forward to welcoming them to the Revival in September."

Firm details about the car itself remain frustratingly sparse, if tempting in their fundamental promise. Little seems to have changed from last time we discussed it, key points like the 1,200kg kerbweight, 200mph performance and sub-four seconds to 60mph benchmark sprint confirmed in the press release announcing the Goodwood unveiling. As we know, that will all come courtesy of a Cosworth fettled version of the 5.0-litre V8 from the Ford Mustang, back of a fag packet maths off the promise of 400hp per tonne suggesting a headline figure of at least 500hp. Built according to Gordon Murray's iStream production methods, this approach claims to slash costs and help speed of development. It also gives TVR access to a wider team of designers and engineers geared up to deliver on the fiddly stuff like door seals and infotainment. The kind of details that, arguably, matter more than a noisy exhaust and entertainingly lairy handling in a car likely to cost close to £100K.

The Revival unveiling gives TVR a chance to celebrate some of its past achievements, as well as look forward to its new future. The evocation of the Earls Court motor show at the Revival is the perfect place to do it too, Goodwood promising "a number of older, heritage TVRs, in celebration of the British marque's 70th anniversary" to accompany the new car and celebrate a motor show at which TVR traditionally made a lot of noise with its new models. And some nude ones.

One tradition to be maintained? We'll see.