Pub2Pub in the Americas!

We check in with the Pub2Pub Expedition as it heads towards to South America...

As we're sure you've noticed, 2017 marks the 70th anniversary of TVR, and for fans of the brand, it's definitely been a year to remember, with the launch of the new Griffith providing the icing on the cake of what's been a vintage summer of celebrations. But as the seasonal buzz fades with the encroaching winter, a group of TVR enthusiasts are labouring away in the tangled jungles of Central America, keeping the festivities alive. 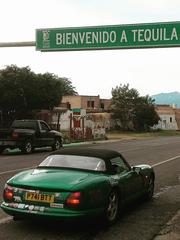 If you've read our previous articles describing the trip, you'll know the score. The Pub2Pub team are attempting a very British challenge: driving a TVR over 20,000 miles, across three continents, from the northernmost bar on the planet, to the southernmost. The expedition got underway in early July, and since then, the plucky little Chim has covered 14,500 miles across 12 countries, from the chill of the High Arctic, to the jungles of Guatemala.

So what issues have plagued the Chimaera so far? Surprisingly few, given the reputation these Wheeler-era TVRs harbour. Breakdowns? None. Yep, that surprised us too. The car has suffered a few of those small TVR-traditional niggles which constitute either character or flaws, depending on your viewpoint, but other than a mildly worrying spot of clutch wear, nothing major has gone wrong... yet.

The reliability is even more surprising when you consider what the TVR has gone through in the past few months. Offroading in Death Valley, at 50°C ambient? Yep, tick. Slaloming the tyre-pounding potholes and vertiginous speed bumps of Guatemala's backroads? No problem. Dodging errant motorists in Mexico, where anyone can buy a driving licence without taking a test? A few close shaves apart, the Chimaera has taken it in its stride. Running the quarter mile against a Dodge Charger at Amarillo Dragway in Texas? Smashed out without breaking a sweat. And 600 mile, roof-down days dodging pick-ups on the US interstates? According to the team, these weren't too tough actually, given the grand touring credentials of these '90s TVRs.

So what's next for Pub2Pub? With 14,500 miles complete, the expedition is well over halfway to its ultimate goal - the world's southernmost licensed premises, in Tierra del Fuego, Patagonia. They're aiming to be there in January, to raise a glass to the brand's future. And we'll be here to let you know how they get on!