Is there hope for the 718 Boxster? PH Blog

As petrolheads and millennials battle for the heart and soul of the sports car whose side is the new 718 Boxster really on?

I had really high hopes for the

. There's the obvious caveat that we haven't driven it yet and I'll try to remain optimistic for when we do get behind the wheel. But it's taken a bit of a knock.

It's not helped by Porsche's official marketing spiel evoking the 718 Spyder the new four-cylinder Boxster range is named after. Mainly because I rather hoped the new Boxster really would be a modern day 718 Spyder in more than just name. My dream was of something like the 987 Boxster Spyder, embracing the weight advantages of a smaller engine, exploiting the improved dynamics of reduced mass, simplified and running smaller, skinnier wheels with focus and feedback compensating for the sacrifice in cylinders and cubic capacity. 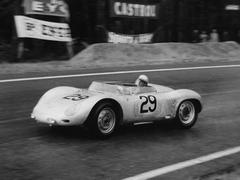 The spirit of this...

If Porsche had the courage of its convictions here we could have something like a premium-badged Lotus Elise, a tad heavier perhaps but blessed with favourable weight distribution from longitudinal boxer four and just enough fancy trimmings to meet customer expectations. Or, given the Boxster's price point, perhaps an Alfa 4C type car with substance (steering and suspension you can actually live with spring to mind) to back up the style.

Instead I rather fear we have an attempt to distract from the loss of a defining character feature with some big on-paper performance gains and gimmicks like a push to pass button. Watch Porsche's 'For the sport of it' promo vid and try and maintain your sense of optimism. I rather fear referencing the original 718 smacks of exploiting brand heritage rather than respecting it. The fact much of the inspirational driving footage is about posing around town says a lot. And, wait, that Porsche-scriptedrear wing doesn't actually retract into the bodywork when you park up? Oh. 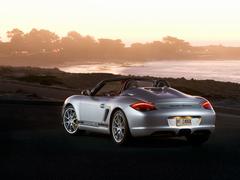 I said as much about

but at the kind of speeds you could realistically expect on a dealer-based test drive the torque-heavy low-down punch of these new cars will flatter them in comparison with the normally-aspirated ones. If you're an existing owner it'll feel immediately 'faster'. If you're a first-timer graduating from a turbo hot hatch or premium turbodiesel saloon it'll live up to your expectations of what a modern sports car should feel like. But on a proper drive will it prickle the hairs on your neck the same way? There's a hint of noise in

but it won't do much to calm fears the driving experience has all gone a bit videogame-like. Meanwhile the

raging after our initial story on the car's announcement has taken a turn for the existential and is well worth reading - it seems no less than an inter-generational battle for the soul of the sports car is looming between petrolheads and the up and coming millennials!

But I'm kidding myself really. The 718s are based on the existing Boxster so a fundamental change in character, weight, wheel size and focus was never going to happen. The only course of action available to Porsche is to hope sizeable performance gains and extra gizmos will compensate for the loss of what was a unique selling point at this price level. If Porsche can pull this off - and a boxer four with a variable vane turbo sounds like the kind of thing that could restore my optimism - it'll be some triumph and I'll gladly eat my words.

718 Boxster promo vid with a bit of engine noise