seems to be a staple for my columns , blogs and bar-room banter. Whether it's

, there's always a manufacturer somewhere wanting the kudos of beating a record here at the 'ring. 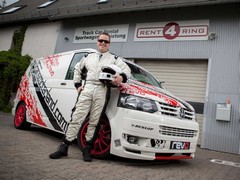 But when my mate Paul Cowland told me about a plot to drive a tuned-up diesel VW Transporter to the 'ring and back, setting a laptime in the middle, I have to admit I jumped at it. Absolutely barmy? Absolutely yes.

The 'record' that Transporterland.com and Revo Tuning wanted to break was that legendary lap by the Queen of the 'ring, Sabine Schmitz. In what can only be described as awesome television, she tried every trick in the book to get a stock Ford Transit around the Nordschleife in under 10 minutes from bridge to gantry. She didn't get there, but damn, she was close.

But while Sabine has a decade or two of racing experience and a fair dollop of talent over me, she only had a 140hp stock Transit on standard tyres. The Revo tuned 220hp Bi-Turbo Transporter would be arriving outside my Rent4Ring office with its ply-lined interior full of super-sticky Dunlop Direzzas. There would be no need to take stuff out of the van, like Sabine had to. In fact, the thought crossed my mind that we should LOAD up the Transporter further. Maybe a half-tonne of Bitburger would be apt? 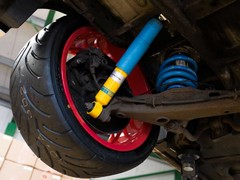 Tyres and dampers made all the difference

Until I considered the safety implications of rolling a wobbly 2,000kg piece of tin with a half-tonne load breaking away in the back.

So instead, I just donned my race suit (again, I considered Union Flag shorts and a builder's vest, but was told it didn't look professional) and headed out on to the Destination Nurburgring trackday.

Driving a van on the 'ring is not something new to me. I'm not sure I can say much more than that without alerting previous employers to less than professional conduct. But driving a van with Bilstein PSS14 suspension, and semi-slick tyres was very new. Until we slithered into T13 with an armful of understeer, I'd been courting fears that the whole thing would turn over. Or bend in the middle like a KitKat wrapper, or something.

Actually, despite my best attempts, the ESP system proved impossible to turn off. So the only thing I was battling was my own stupid gear choices and the aforementioned understeer. On the road, you could drive the wheels off it and not have a problem. Quicker than a whole generation of warm-hatches, no doubt. 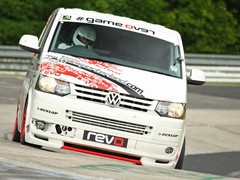 Coming to a rear-view mirror near you...

But it was just the final per cent that proved problematic on the Nordschleife. The stability control would actually create understeer by chopping the power and doing something funny with the brakes. No drama, I'm not a diva, I just tried to drive around it.

I only had three laps total, the third lap was going much better than the second, which set the record. But I had to pit-in for a red flag before I crossed the line, so it was the second lap (with bad gear choices throughout) which actually set the record. This particular 'pro' driver then had to leave the track to make the clients coffee and check on the cleanliness of the customer loo after the lunchtime rush.

But, that's it, Revo, Transporterland and even VW Commercial can claim to have the fastest van around the Nordschleife. 9min22sec BTG, nearly 40 seconds quicker than Sabine's DIY-superleggara Transit. Relevant? No. Hilariously irreverent and fun to do? Oh yes. And that's why you're reading about it!