Why don't more PHers actually pull the trigger and buy a SOTW? You could do worse than this one...

Maybe it's because cheap car buying is a bit like voting in an election. We all like to think we've got the chutzpah to go for something a bit different, a bit way-hey, a bit naughty. But when it comes to the part where you're about to put your cross on a ballot paper or your signature on a receipt, an instinct of self-preservation kicks in from nowhere and you end up voting Conservative or buying a Golf. 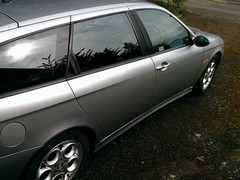 This week's Shed might be an exception to the 'no buy' rule, though. It's got low miles. Three previous owners. No apparent blemishes. A full and contemporary service history, with recent money spent on consumables. A great sporting name. Fabulous styling. A superb interior. A degree of practicality.

The only box it doesn't tick is face-melting performance, but we are talking about a £950 car here.

As estates go, the Alfa 156 Sportwagon might not be your first choice if simple load-lugging is your #1 must-have, because carrying ability takes a back seat to visual appeal. In the actual back seat three passengers would be a bit of a squeeze, and the shape of the boot aperture and space is not IKEA-friendly.

But who cares when a car looks as good as this? The scalloped Centro Stile lines are nigh-on impossible to fault. Even the humble sill is transformed from something you worry about at MOT time into something you wonder at every time you see it. The interaction between that sill curve and the crystal-sharp door panels is just sublime. Mercedes clearly rated that gut-sucking-in, 'pouncing' look as it created the W219 CLS a scant seven years later. 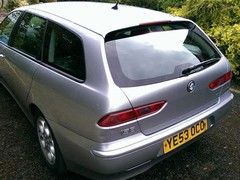 Style before (bulky) contents but who cares

Then of course there's the jaunty off-centre front reg plate, a proud statement by Alfa that national car registration bodies around the world wouldn't be allowed to interfere with the grandeur and purity of the trademark V-grille. To be fair, they pulled that one off: in an automotive world ruled by perfect symmetry, Alfa has managed to establish deliberate wonkiness as a positive styling touchpoint.

The spec of our Shed is interesting: the smallest engine option, a 1.6 TwinSpark producing less than 120hp, mated to the full-house Veloce leather interior and the very sexy teledial wheels. Could it have been ordered by a visionary fleet manager for a small but thrusting young company in the creative business? Here they are lads, 156 Sportwagons for all! No, no, don't look under the bonnet, just feel that leather! Raven-tressed Taffy brass Catherine Zeta-Jones did a peculiar ad for it back in the day. No doubt she pondered on the 1.6 wagon's 43.5mpg potential and low Group 11 insurance as she curiously accessed it via the tradesman's entrance.

This 2003 car is a post-2002 facelifter, but it's not a 2003 second series with the more aggressive front end. Many would see that as a good thing. The GTAs never got that 'update', and most diehard 156 fans were quite happy about that. Being a 2003 car, this Shed will be free of the quality problems that bedevilled early cars. The other thing that bedevilled Alfas, in the UK at least, was dealer apathy, but main dealers are only visited by Shedmen in need of a cheap laugh. There is no shortage of backstreet boys who will be more than happy to fettle your wagon at reasonable rates. 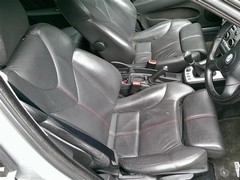 What might they need to fettle? Electrics, engines and suspensions are commonly mentioned, as are low reliability and high repair costs. Good wheel alignment is important if you want to keep your tyres legal for months rather than minutes. Track rod bushes wear out, occasioning some knocking over bumps and inducing steering slop. Cambelts need replacing every 36K miles to be on the safe side. Trim and its ability to stay where it's meant to was a headache on early cars, but really that shouldn't be an issue on a 2003 car. The major service recently carried out should set your mind at ease for most of the rest.

If any used Alfa could be said to be ready to drive away without much in the way of fear or trepidation, this could be the one. All right, it won't rip your head off every time you stamp on the throttle. But, as Shed is continually telling Mrs Shed, you can't have everything.

Hello and welcome to my sale of my mother's Alfa Romeo 156 Sportwagon (estate). It is in sliver with full Veloce spec. to include full leather sports seats (not rips, no tears, no heavy bolster ware), teledial alloys, and over carpets. 85k miles with full service history and a paperwork file to prove as well as the dealer stamps. Two months MOT to run, mechanics are prefect (brakes, tyres, etc.. all recently done, and major service less than 3k miles ago. All the electrics work. Comes with all the original books and two keys. Basically a really good car, ready to drive away and use.

Mercedes-Benz CLK 200 | Shed of the Week