Home/Regulars/Shed Of The Week/Shed of the Week: Alfa Romeo 159 Sportwagon

Not without its flaws, but could this 159 be a Sportwagon steal? 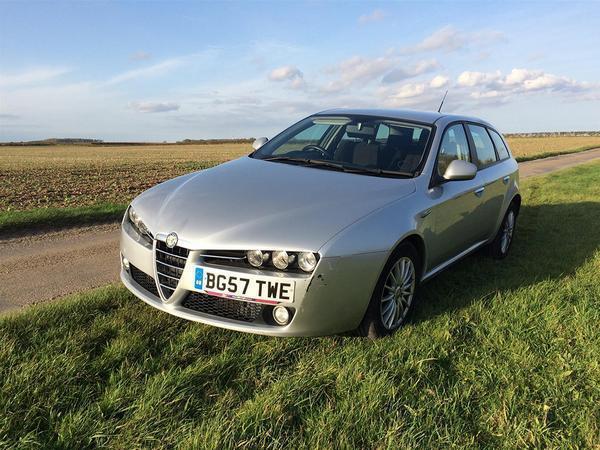 Sometimes, things are not what they seem. When Shed first met the future Mrs Shed, he thought she was a kind, caring and attractive person. It was only later, one day after the wedding in fact, that he discovered she was actually a spiteful, vindictive and ugly old bag. 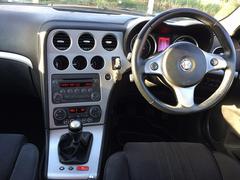 Yes, that really is cloth

A similar thing can happen with cars. You buy in haste and repent at leisure as all the demerits you made a point of not researching (because you just wanted that car) hit home with a dull thud.

Very occasionally, and happily, this process happens in reverse. You reluctantly spring for a car that you're not really sure of, and it turns out to be a lot better than you expected.

This week's Shed, a 2007 Alfa 159 Sportwagon, could well fall into that rare category. The first Alfa 159 to find itself tangled up in our SOTW net, our offering has been sitting around on PH classifieds for a few weeks now. Why would that be, do you think? Could it be it the cloth seats? The dull colour? The so-so performance? The scuffed lower panels and wheels, indicating a too-narrow driveway?

Likelihood is that it's a combination of the above, because if you look at this model in the round, it's a handsome (Brera-influenced, Giugiaro-designed) and surprisingly practical workhorse with a decent reliability record. OK, the back windows don't work on this one, but let's not go setting a falsely high bar just because it's an Alfa: German cars are just as likely to suffer from this sort of glitch. 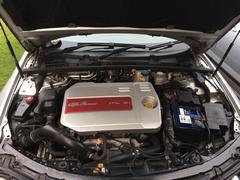 So, what are you in for with a JTDM 159 wagon? Well, that sharp styling for a start, followed by a cabin that was a lot more spacious and comfortable than that of the preceding 156. When new, the 159's much stiffer bodywork offered a lot more protection for passengers (albeit not so much to pedestrians - it scored just one Euro NCAP star for that), but thinly-applied paint and/or underseal means you need to check for corrosion now, especially in the front subframes and floorpans.

The six-speed box is slick and usefully high-geared in the top ratios. The toe-out setup of the double wishbone front and multi-link rear suspension is very particular to Alfa, which is known for favouring quick steering and 'bitey' turn-in. Down the line, this engineering philosophy can generate a foible or two, and indeed our Shed has had some trouble with the suspension, principally on the nearside, but by the looks of things everything has been sorted as it's come up. This one should start well anyway, as the starter motor is only a week old. It's worth checking that the ignition key activates and deactivates the immobiliser as it should. They don't always, and that sort of thing can be very annoying.

Turismo was the lowest spec of three available in the UK, and quite an uncommon choice. Mind you, anyone that picked a 159 wagon when the 'normal' choice would have been a BMW or an Audi was clearly not cut from common cloth, so the choice of actual cloth here as a seat covering is appropriate. Not that it is common cloth: it's Alfatex, a rather nice suede-a-like velour. Every now and then it's nice not to have leather in your Alfa. 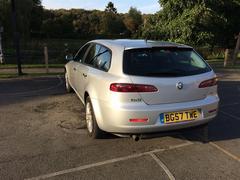 Regardless of engine, it's still a looker

The MoT history suggests that it went from its first or second owner in the Midlands to its new and possibly current owner in the North East at around 50K miles in 2010. In the seven years since then it's only racked up another 50K miles, which is a well below average rate of use.

One problem that never seems to go away for Alfa owners in the UK is the often flaky nature of the dealership experience. That, and this week's Budget hike in diesel tax, won't help our Shed's chances of finding a buyer. Nor will the fact that this is the 150hp 1.9 and not the excellent 200hp 2.4 JTDM unit. Not because of any power shortfall, and definitely not because the 1.9 drives any less well - in fact, many regard the smaller-engined diesel 159 as the best drive of the 159 range, and a heap better than the disappointing (and very thirsty) all-wheel-drive 3.2 JTS Q4 petrol 'star model'. It might be sticking on the shelves because the Fiat/GM/Saab 1.9 has a patchy history with some reports of clogged EGR valves, thrown timing belts and fragile swirl flaps. Still, the beauty of Shed motoring is that you'd never willingly venture into a dealership when there are so many non-franchised specialists around to help keep your Alfa going.

If you latch onto a good 159 JDTM, you'll be pleased you did, and glad that you had the courage to take what might, to some, appear to be a risky plunge - the exact phrase that pops into Shed's head whenever Mrs Shed thrusts her voluminous and disconcertingly spotty cleavage in his direction.