After PH's recent Peugeot GTI frenzy, we've been trying to look elsewhere for Shed sustenance. The thing about great Sheds though is that they can appear out of nowhere and make themselves utterly unignorable, if that's a word. This golden Gallic temptress falls squarely into that category. 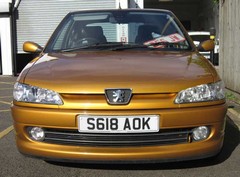 Very tidy looks for a car at Shed money

Motoring journalism is rightly famed for its hyperbole, but this time it really is no exaggeration to say that the Peugeot 306 GTI6 is one of the all-time great hot hatches. The 306's unprepossessing style is perhaps partly responsible for ramping up the 'surprise and delight' factor. The beating bit of that heart was a sweet and free-revving 2.0-litre 16-valve four turning out 167hp at 6,500rpm, mated to possibly the best Peugeot gearbox ever. A rifle-bolt six-speeder (hence the name) developed by Peugeot's motorsport division it was a first in the hot hatch class. "So precise and smooth, you find yourself changing gear for the hell of it," effused Autocar's testers.

The acceleration figures - 0-60 in 7.8 seconds, 0-100 in 21.5 - are good even by 2012 standards, but it was what happened through your hands and backside that set the GTI6 apart back in 1996. There was nowt special about the strut/coil/ARB suspension up front, or about the torsion beam/trailing-arm set-up at the rear, though it did have passive rear steer. The engine was mounted as far back in the chassis as was practicably possible, but the 6's best weapon of all was something it didn't have - weight. 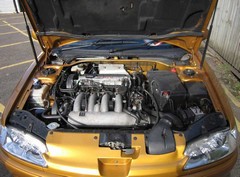 Plenty of receipts help to reassure

Coming in at just a few kilos over 1,200kg gave it a distinctly handy power-to-weight ratio of 137bhp per tonne. Even the stripped-out 306 Rallye was only 16kg lighter, and that was at the expense of useful GTI6 stuff like air con and the nice half-leather trim. With the fast steering rack from the preceding 306 S16, the GTI6 was one handy tool - and 16 years later, a good example like this one

Anything to watch out for? Well, just the usual PSA stuff like fragile electrics, rust (galvanising wasn't part of the plan), flimsy seat mounts and adjusters, dead heater blowers. On a car like this it's always worth checking the engine mounts, suspension parts and driveshafts. Dodgy map sensors or coil packs will cause poor or non-existent running, but that's not exactly exclusive to Peugeot. Parts seem reasonably cheap and there's strong online support for the model. 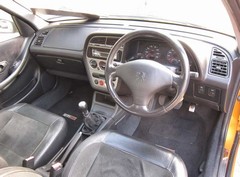 Half Alcantara trim is a luxurious touch

You can read all about this car's excellent service history in the original ad. Seems like all you need to do as the next owner is fit some decent tyres, pop the spare key somewhere safe and head out on the highway. Expect average mpg in the mid 20s, over 30 if you're being careful, and under 20 if you're driving it properly.

With the Autocar summation ringing in our ears - "another great Peugeot hot hatch that knows what keen drivers want, and provides it ... easily good enough to be rated alongside the 205 GTI" - only the most churlish would quibble with Volkswizard's reluctance to take offers on £999.

1998 Peugeot 306 GTI-6 with 2.0 16v petrol engine and 6 speed manual gearbox. 9 owners from new. 1st was a lady from Pershore, Worcestershire. Last 2 since 2008 were local to our premises and lived very close to each other. Last owner traded it in at VW main dealership and we purchased it due to its outstanding condition and status as one of the best hot hatchbacks ever made according to Evo magazine who gave it a 5/5 star rating.

We also have numerous receipts, some from the last few years which point to DIY servicing such as one listing oil and oil filter purchased in Feb 11 with "120000 miles" written on it. The most important receipt however is for £1378.91 from 24/11/11 for a thorough cylinder head overhaul which included a cambelt kit, water pump, thermostat, spark plugs, oil filter, drivebelt and much more (see the last pic below).

This really is an unusually good example of the 306 GTI-6 bought by me specifically because it looked so good. I didn't know at the time that it came with a bill for the cylinder overhaul but that explained why it drove so well. Everything works apart from the electric mirrors and possibly the air con - this is a common problem on these and it's been too cold to know for sure whether it's working or not so please assume it isn't. All 4 tyres have lots of life left though are a budget brand. The bodywork really is close to perfect as is the interior - you'd be lucky to get a VW Group at this age and mileage looking and driving this well (although not many will have needed over £1k of work!)