Can the new Mercedes-AMG C63 S break the growing bond between Dan and 'his' M4? 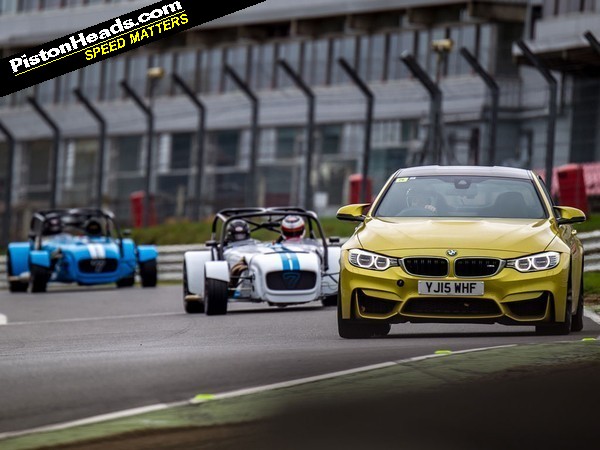 I quite like the fact the M4's odometer clicked over 10,000 miles at some point while I was driving it round Brands Hatch the other week.

This is a good thing because it spares me having to witter about how much I've bonded with it over the long hours up and down the A1. You want to know about Brands Hatch in the wet in a car I've spent the last few months telling you is scary enough in the dry. Having acquired another set of wheels with some fresh rubber my plan was to give the knackered old ones a smoky send-off. But the weather said otherwise. They now lurk in the cellar awaiting a dry day and opportunity for a proper Viking style cremation. 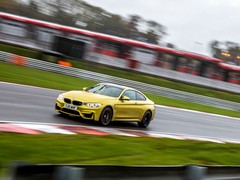 Sadly you can't see the huge grin at this point

With fresh rubber Brands was, frankly, something of a revelation. As I said in my comparison with

, the M is an aggressive car. And after all that hand-wringing about its spikiness I was expecting it to be a proper handful. The reality was a far more friendly, approachable and exploitable car than I'd ever expected. Work with it, feel for the limits and even in the pouring rain the M4 shows impressive ability.

And the track really let me explore that engine properly, something the road rarely gives more than fleeting opportunity for. The trick, especially in the wet, is to navigate that initial burst of torque as the turbos spool up. If you're clumsy this will upset the car and you'll either have to back out of it or the DSC will do it for you. But once into the revs the engine's massive power band - peak torque stretches from 1,850 to 5,500rpm remember - and impressive linearity give you loads to work with. The torque tempts you to short shift though. Don't! Beyond that there is a properly thrilling top end as the rev counter shift lights begin to flash. Change up here and it dumps you back into the mid-range sweet spot without stalling the turbos and the M4 really begins to show its colours. Yum. The only problem? Brands Indy isn't big enough. 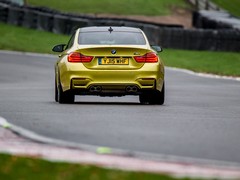 See, it does go straight sometimes

Driving for the conditions revealed a few quirks too. I actually used lower gears than I usually would; the turbo torque is great in the dry but spins up the rear wheels too quickly in the wet. Shifting to second where you'd usually be in third maintains revs and takes the edge off the boost. And dialling back to the second of the three gearbox settings was better too; in the harshest the contrived SMG-style jerk is enough to unsettle the car and flick it sideways. Other impressions? The DCT gearbox is brilliantly fast even in that second mode, the ceramic brakes held up way better than the chocolate ones in the E92 (I had pedal fade after just a few laps of a wet Bedford in

I drove) and the front end is just so positive and grippy once you've got through the mush in the first few degrees of lock. Turn-in and balance are razor sharp, exacerbating that tail happiness if you're impatient but massively rewarding if you know how to exploit it. 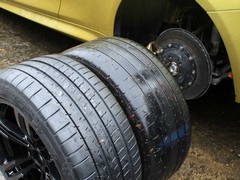 Yes, time to get those changed

M Dynamic Mode on the DSC is a willing partner here too. Give it a bootful and you'll likely end up in a scrappy fight with the electronics. Feed the power in more gently and the M Diff is brilliant at sending the power where it can work best, the car more settled and progress faster. Obviously a real man laps an M4 in the wet with everything off and in this mode it actually felt even more comfortable and predictable, with feel enough for instinctive rather than electronic corrections and no nasty surprises. The Brands marshals are rather hot on sideways antics though so, rather than risk a black flag, I kept MDM on most of the time. Before permitting myself one proper, on the lock stops navigation of Clearways that had me giggling like a child before composing myself for the 'No Drifting!' board waiting at the next marshal's post. This wasn't the only thing cooling my boots - at 8mpg I'd drained a tank in just 75 miles. On the commute it's 30+ and over 300 before I'm even considering pulling in.

So I liked the car already. Now it's full-on love. You have to get through an electronic smokescreen first - the fake noise, the plethora of driving modes, the electric steering - before you find the 'real' M4 lurking behind. And the good news is it's a beaut and most definitely a proper M car. That it doesn't reveal that on first encounter is actually quite refreshing, the reward all the sweeter when you start to uncover it. It's a completely different mindset to the C63 Coupe, which goes all out to impress its considerable abilities on you in the first few hundred yards. Driving the M4 to and from the airport for the AMG launch is as close to a direct comparison as anyone has had thus far; getting them head to head has to be an absolute priority.

Thanks to Bookatrack for having us! For more about our exclusive competition to win a day's Caterham hire on one of their events click here.

Previous reports
Dan wanted an M3, gets an M4 instead - what to do?!
It started so well... and now the M4 is in the bodyshop
Finally back from the bodyshop; time to drive!
Tyres were harmed in the making of this film
Just read the ruddy manual!