A 300hp Escort and hail? What could possibly go wrong? 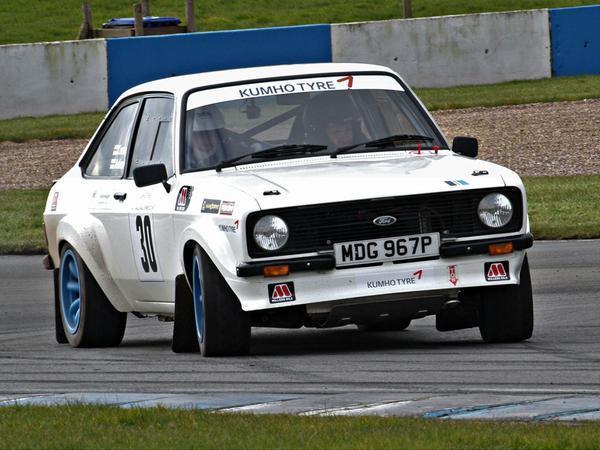 The lead up to the Imperials Commercial Volkswagen Donington Rally started easily and ended up with the usual last minute rush. I'd finished Brands Hatch a few weeks ago thinking the only jobs were a good clean and a replacement windscreen wiper, but it turned out there were tons of little jobs to do. 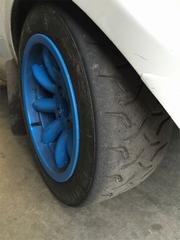 For this rally I was joined by a new co-driver, Mike Askew, a mate and former journo who has plenty of experience in the left-hand seat. He did a great job on all the detail, getting me in to apexes I couldn't see, nailing all the splits, remembering to start the GoPros and generally adding a bit of calmness to the proceedings.

As usual at this time of year, the weather played a big part in the day and its unpredictable nature made most drivers nervous. As it turned out, there was a frost on Saturday night and the track was damp and possibly icy on Sunday. During the day we had a mixture of sunshine, rain and hail. Competition tyres need to warm up to generate any grip, and those conditions it's very hard to make that happen.

Some chose to run intermediates or hand-cut wets, in which the movement of the tread helps generate heat. As the track was just damp, I went for my usual dry tyres, the Kumho Ecsta C03 moulded slicks, but chose the softest K12 compound instead of medium rear and soft front. On a warm day the power would destroy the soft rears but in the freezing conditions, I'd needed all the grip I could get. Like a muppet, I once again had failed to scrub them in.

For a while, I've followed the received wisdom amongst drivers of running low tyre pressures to generate heat. After the last post, Kumho's tech team got in touch to explain that this encourages heating of the sidewalls but not the tread. They recommend higher pressures to support the sidewalls and force the tread to do the work. So I started with 26psi all round and we saw around 32 coming off the stages, which Kumho says is a good place to be. We stayed with that all day and the wear was much more forgiving with less chunking than normal. 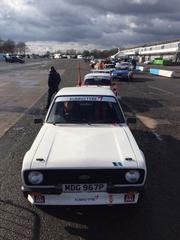 The first stage was predictably action packed. Those who hadn't been there before quickly discovered on SS1 how easy it was to spin on the left-entry chicane at the exit of Coppice. Having survived that, the next challenge came when the second half of a chicane had been destroyed by a previous car, leaving only a small gap to squeeze through. There was a collective holding of breath at that one, as you'll see in the video. As the hail arrived, then disappeared again, track temperatures - and therefore grip levels - were hard to judge.

I'm starting to get the hang of the Millington engine's brutish power now, but was reminded by another driver recently that it's harder to drive a very powerful car fast than it is a less powerful one. There's some truth in that I reckon. Keeping it nailed in the 2.0-litre Yellow Peril was less likely to result in high-speed end-swapping than this one, that's for sure.

Mechanically, the car was great. There were no distracting gremlins this time as there were last time we were here. It turns in nicely, is fantastically agile and I'm making better use of those big AP5000 Pro + R front brakes than I have been. We finished 14th from around 78 starters, a big improvement on the last result at Donington of 27th in a strong, national field.

The new circuit-based single-venue format is good fun and the most affordable form of stage rallying. There is traffic to deal with as people leave the pits (and sometimes you find yourself being the traffic) and this costs a lot of time. Patience is needed because it goes with the format, which is a blend of rallying and racing.

Compared to gravel, the sealed surfaces massively reduce the damage done to cars, making it much more affordable. Taking a car like this one in the forest would never be an option for me financially. More importantly, these venues attract lots of spectators who might not necessarily be hardcore rally fans; it's fun for them and good for the sport. 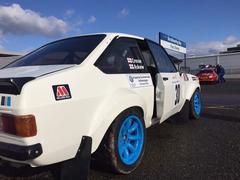 Hopefully it's onwards and upwards from now on. Now the car is sorted, the next job is to get it a new livery and simply spend more time in the driving seat on the same set-up to pick up the pace. You'll see we've upped the videography (a compilation of fun bits this time) from cheapskate to just cheap with an extra camera on the car for some cabin shots. In the near future we plan to up the stakes again to low-rent, with three cameras, the third mounted on the outside somewhere.

Oh, and one other thing. I'm not one for giving cars names but since the Yellow Peril had one, this one probably should too. Mike's already suggested White Lightning, which sounds OK, and there was a Burt Reynolds movie of the same name in 2003 about Moonshine runners. Answers on a postcard appreciated. Nothing too rude.

Previous updates:
Jesse's new Escort in all its 313hp glory
First run at Castle Combe for the new RS
First competitive outing and the RS is flying
Slithery winter conditions reveal the ferocious side