There is much conjecture as to what constitutes the most challenging corner in the world; Eau Rouge, Pouhon, 130R or maybe the evil Schwedenkreuz.

But for me it is the penultimate 90-right exiting the short stay car park at Heathrow Terminal One. 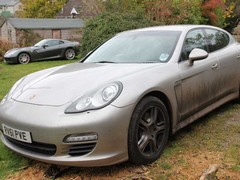 It would be hard enough to navigate your way between the concrete obstacles in this hell-hole driving a Toyota iQ, but in the Panamera it's a nightmare. You swing wide left to give yourself the best possible chance of clearing the evil, jagged thirty inch stump of rock on the right, but as the apex approaches, you can't see if the rear wheel will clear without dropping the wing mirror, and doing this might distract from aligning the front left - which is already perilously close to another hunk of concrete. 18 hours into the working day, this little lot makes Blanchimont feel like Stowe at 35mph.

Under-endowed
And I got it wrong. The front left clipped the kerb and the Panamera's shoulders gave that telltale wobble we all hate so much: the one that signals a scratched wheel rim and makes you want to punch things and people. I didn't want to survey the damage, so I drove home, slept and went outside the next morning to have a gander before phoning the wheel refurb people.

And there was no damage. 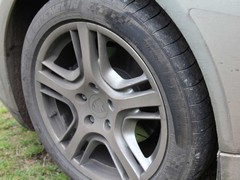 If I was already convinced that the 'small' 19-inch wheels on this car were the perfect choice for ride comfort and supporting my personal belief that a poverty-spec Panamera is less offensive to the general public than its full-bling brethren, then I'm now absolutely certain. That chubby sidewall and the protruding lip from the Michelin saved an expensive refurb.

In other tyre news, the rears are only about 7,000 miles old and wearing well, despite some hooning for the video we shot. The fronts have been on the car since it was assembled, and now approaching 20,000 miles they are completely spent and will need replacing within the week.

Marmite anyone?
Few cars split opinion like this one, and the Marmite analogy is especially apt because like concentrated yeast extract spread on toasted bread, people tend not to take the soft-line about the Pan Am: they either love or hate the thing. What is absolutely not in doubt is that anyone who completes a long journey in either the front or the rear of this car cannot believe how capable it is. 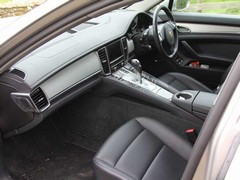 Well, it looks nicer than the outside

Neil Carey, who I work with on the DRIVE videos, sprinted over to Spa in it to shoot

and was blown away by the mixture of speed and economy. "But it still looks dreadful", were his parting thoughts. And given his design background, his opinions probably count for something. I like the way the Pamamera looks. And one of my children has just pointed out that I am wearing a jumper inside out.

This car had already covered nearly 10,000 hard miles as a press loaner before I started using it - and promptly doubled the mileage in four months. Brief encounters always hinted that the Panamera was build to withstand some abuse, but the freshness of this car at this mileage is quite something. Everything in the cabin seems untouched and only the outside squab bolster on the driver's seat has polished slightly.

The only problem I have with the splendid cabin is with the hi-fi control buttons, which require quite a shove to operate, which in turn encourages you to use the excellent touch-screen instead. Otherwise it's a fantastic place to spend endless hours heading to jobs.

Show some respect
I continue to enjoy the beefed-up Audi V6 and ZF eight-speed automatic. Actually, should 'enjoy' really be 'respect'? I think it should - especially for the engine. However the gearbox is a masterpiece, and having seen the way BMW has made it perform in the M135i, I can't help but wonder if it wouldn't actually make a more pleasant transmission than the PDKs fitted to faster Panameras. 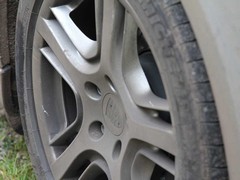 This car's role is to cover large distances at speed, in comfort - often on motorways in different countries, and always with some enjoyable roads along the way - and to do so efficiently. According to that definition, the way the Panamera Diesel goes about its job makes it one of the better cars I've run. Even with the little 80-litre tank it'll cover well over 600 miles between fills and yet there are some rather more sporting machines that have followed it cross country and, shall we say, underestimated the competence of its chassis.

Seeing the Sport Turismo concept in Paris was an eye-opener. Most people thought it better looking than the existing car, and I agree. The extra boot volume will make for an even more practical cabin, and much of the rear three-quarter awkwardness people like about the current car has been removed.

But for now I have to accept that the haters will always hate. For those who don't, check out the new contract hire deals on one of these and then try driving one. I defy you not to be impressed.