SEAT's latest hot hatch joins the PH Fleet; Dan hasn't taken it to the Nurburgring (yet)

There's been quite a bit to say about the

recently. An encouraging first drive was enough to proclaim the return of the decent fast SEAT, PHers were involved with the promo video, it claimed a

and then subsequently had it 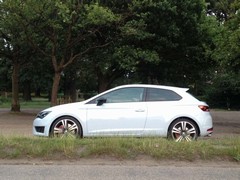 So now we have six months to establish definitively where the Cupra sits in the hot hatch hierarchy. And talk about it some more.

How to do that? A few comparison tests are due, particularly against the Golf R and the Megane 275. We've heard the 265 is ever so slightly sweeter than the 280 thanks to its smaller wheels and different tyres so we should probably try one of those also. Given the frenzy around that lap time a trip out to Germany is on the cards. When (if?) the Performance Pack is made available I would love to give that a try as well. Everything seems fabulously luxurious after 4,000 miles in a Caterham so I can forgo air-con. There will of course just be daily driving duties as well.

Moreover, we're hoping to investigate a few tuning possibilities. Fear not, it won't be scened, it won't have 450hp going through the front Potenzas and it won't have LED screens in the door cards. But with such an active Cupra tuning community we would like to see how the car responds to a few reversible modifications. A tad more power, some additional handling edge, that sort of thing. And yes, we have SEAT's blessing. If you have any recommendations, please add them to the comments or contact me directly. 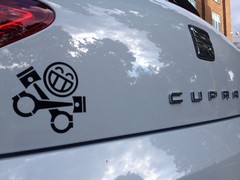 Anyway, that's for the future. Right now it's time to introduce 'our' car. The third generation Cupra introduces a three-door option for the first time and, without children or many friends to cart around, having five seemed unnecessary. Having a sprog in tow Dan will hopefully be less keen to nab the keys as well. Besides, all the best hot hatches are three doors, aren't they? The 'base' 265 is only available as a three-door manual which would have been ideal for me but only the 280 was offered. Tough life etc... Given it's available with both gearboxes and bodystyles (the estate is still unconfirmed), the Cupra 280 will likely take most of the sales.

The paint has proved divisive so far, put it that way. From a fairly uninspiring colour palette the £695 'Dynamic' hue seemed the most interesting choice. There's the possibility of getting it wrapped but, honestly, I actually just like it. The paint needs sunshine to work best where it resembles a kind of duck egg blue (or faded Gulf blue as I like to tell people); otherwise it can look grey. So far it's been called 'Metallic Seagull S****' and 'half-way between Blu-Tack and filler' so please feel free to contribute any more.

Hopefully speccing a manual will prove less controversial. If anything the shift feels even shorter and quicker than it did at launch, perhaps attributable to sitting on the right. The clutch is a little light for my liking and third to second is a little stiff with 208 miles on it but I'm hoping the latter will free up with age. Of course it saves £1,285 over the DSG also. 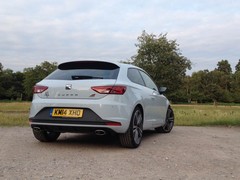 There was no choice on the other equipment, all the early press cars coming well specced. My initial reaction (I first got in it on Monday!) to those is they're largely surplus to requirements and demands. The £500 Adaptive Cruise Control probably won't be used that much, and I could certainly do without high beam and lane assist (-£295). Paying £115 to be told I'm tired seems a little excessive also. The SEAT sound system would probably have been added, and obviously the paint too. We'll wait and see on the £755 leather seats; there was talk at the launch of buckets being made available so again I'd be quite keen to try those.

From the first 126 miles (it arrived with just 82 on the clock), the signs are very good. The handbook suggest only two thirds of the revs to be used for the first 600 miles so there's been nothing too intense just yet. But it feels plenty swift even allowing for that, and there's a real sense from just pootling around that it will entertain when fully run in.

It does all that boring day to day stuff like Bluetooth, DAB and music syncing just fine for now also. More on those when I've had more time with them (or they go wrong).

Having grown up witnessing the hot hatch's resurgence (I was 10 when the first Civic Type R arrived in Britain with 200hp; how amazing was that?), to be running one of the current breed of exceptional hot hatches is a very exciting prospect. Should be a fun few months.