"You don't know what you've got until it's gone" is a sage piece of advice suggested by grandparents that often goes in on ear and out the other. "You don't look at the mantelpiece while you're poking the fire" was more keenly remembered, if only because there are some things your grandmother should never say... Whatever, now the Leon Cupra has been taken away it has become clear just how talented it is, a point that had become all too easy to overlook. 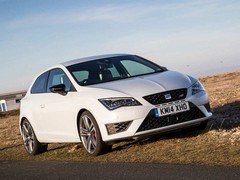 Could it be jazzed up just a little?

Throughout it's time with us the Leon has put up a very good fight against a whole host of rivals PH has had on test. In its final weeks it was informally compared to both the

. The lessons learnt from the Nissan were that a) hot hatches based on hatchbacks are definitely best and b) that VAQ 'diff' really is exceptional and can outperform a conventional LSD in some cases. The Audi was certainly a more pleasant place to sit but it was also £40,350 as tested. The Leon is £29K with options. What has become evident throughout is that the Leon Cupra is simply a very hard car to fault.

And don't mistake the impeccable performance for a lack of 'character'. The arrival of the Golf R (it was bound to feature at some point!) has proved just how exciting that clever front axle is. Put simply it can be felt doing its thing far more readily than the Golf's four-wheel drive system. With 81kg less weight and a touch less refinement, the Leon is just more exciting than the Golf more of the time. Furthermore, the SEAT continued to feel quicker as the miles accrued, to the point where the Golf now feels slower on the road. It's not a fair comparison given the miles on each car but the Cupra is by no means a poor relation on performance despite what the spec sheets may say. It's a very, very rapid car. 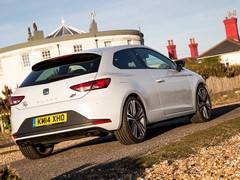 There is another way that isn't Golf R...

SEAT took KM14XHO back with nearly 12,000 miles on it. The front tyres will need replacing fairly soon but that's to be expected given it has been dealing with 280hp and 258lb ft. You could argue we've been driving it too softly... Aside from the damaged radar sensor which meant the cruise control wouldn't work (never used anyway so it didn't bother me), the car has been faultless. As you could reasonably expect but it's still worth mentioning.

Essentially the SEAT Leon Cupra deserves far greater credit in a fierce hot hatch market than it currently receives. I saw one more at the Morgan Sunday Service but other than that it can't have been more than five since July. Given I saw that many Golf bloomin Rs in one 90-minute journey recently it goes to show just what an unfair disparity there is. I would be really interested to hear from Golf R owners as to whether the Leon was considered and why it was discounted. Similarly to drivers of the old Leon Cupras: would you upgrade? And if not, why not? 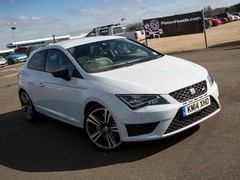 It's certainly not a flawless car though so it's probably time to discuss the areas where the Leon could improve. It needs to be offered in more interesting colours for a start. I'm convinced a yellow, green and orange would increase the Cupra's appeal to many. Fresh wheels choices would help too as both 18- and 19-inch options are a bit dull really. The fake noise remains daft but I'm not sure how that would be remedied. Finally, the bucket seats are a must - they're not as uncompromising as that title sounds but just offer improved comfort and support over the fairly lacklustre standard items.

Still need convincing? Consider this for a deal: a 265 SC for £21,747 or £4,213 off the list price. 280s are around on broker sites with similar discounts, taking those below £23,000. That's outrageous value for a car that is arguably the pick of the MQB hot hatch clan. Personally the Renaultsport Megane appeals more but the more accommodating Leon is a worthy rival. Anybody in the market for hot hatch must consider the Leon Cupra as it's a genuinely superb car. And the Performance Pack? It's arriving at PHHQ for a week in May. Finally. Let's hope it's worth the wait!

Previous reports:
A 280hp Leon arrives, all discussion is on the damn paint
Against racer and hot hatch nemesis the Leon does just fine
Quick and capable yes, but could it be more so?
Slower Cupra battles faster Cupra. Wins. Huh?
Cupra driven by others, verdicts mostly positive
An Anglesey road trip plays to the Leon's many strengths
Others may excite more, but the Leon's hard to fault
Things the Leon could learn from its rivals and its forebears