It's a brace of Italian-built Coupes today - see if you can spot the difference... 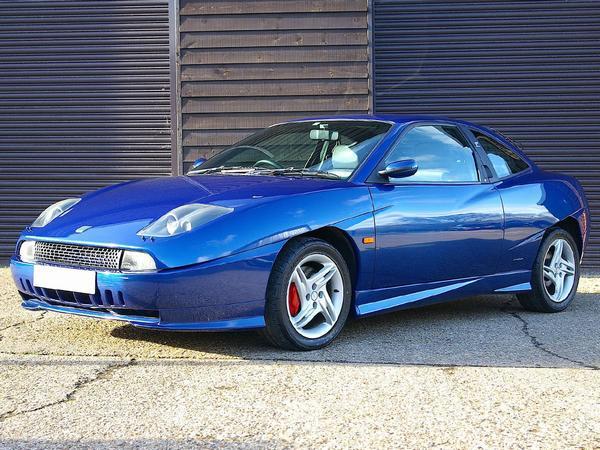 How much does extra mileage affect a car's desirability? Sure, an additional five or ten thousand miles may not be a deal breaker when weighing up an otherwise spot-on find, but how much extra would you pay for a vehicle with, say, 135,000 fewer miles on its clock? That's the question posed by today's Spotted, which features not one but two examples of Fiat's 20V Turbo Plus Coupe.

The comparison is aided by just how similar both cars are. Both are from 2001, both finished in Electric Blue metallic paint, same wheels, same interiors, same six-speed manual transmissions, same 2.0-litre turbocharged in-line fives putting out the same 220hp and 229lb ft of torque. But that's where the similarities end because, while one of these cars is a recent Japanese import, a minter showing just 8,298 miles travelled, the other has seen over 143,000 miles since rolling off the production line.

To give the leggier of our two candidates its due, the difference seems far less pronounced than you might think. Sure, the garage queen has clearer headlights, taughter leather on its seats and a boot less accustomed to clutter, but aside from that it's certainly not the bedraggled rust bucket you might expect. Indeed, it's the higher mileage car which looks tidier under the bonnet; a side effect of more recent servicing, or a sign that perhaps a little more use can be a good thing?

Japanese cars certainly enjoy cushier lives, let alone ones with such low mileage - but even if the Brit has been used year-round it shouldn't have been much more susceptible to rust thanks to the Coupe's galvanised body. With the cam belt, water pump, aux belts and tensioner all changed at 105,000 miles, a new clutch fitted 20,000 miles ago and a long list of other maintenance tasks having recently been carried out - including new disks and pads, a new battery and new tyres - it seems that no expense has been spared in ensuring the well-travelled machine has been kept in good running order.

And why wouldn't you want to take good care of it? The PH Hero delivers strong in-gear acceleration, with exhilarating levels of boost when that turbo (eventually) kicks in. As a front driver, torque steer can make the Coupe somewhat anti-social - especially on wet roads - but, with responsive steering, minimal body roll and strong brakes, its agility in the corners and power on the straights make it a broadly enjoyable experience.

That's not to say you couldn't take the low-miler for a spirited drive, of course, but as a near-concours condition car, you're certain to want to be a little more cautious about its use. And that's before you know how much you'll have paid to get into it. Because while the 143,000-mile car is listed at a fiver under £8k, the pristine import will set you back a full £19,940, or around £4,000 more than double the price. Quite a lot of money however you cut it.

So, given £20,000 and told it must go on one of these two, which would you choose? The supposed peace of mind, satisfaction and investment value of a pristine low-mileage import, or £12,000 in spare change courtesy of what still looks to be a pretty sound car? It seems that one PHer has already made his mind up, with the ad claiming a deposit to have already been taken on the more expensive of our two candidates. Obviously, if it's the car you really want, you take the best example and hang the cost. But for anyone else, £12k seems like a lot of compensation for living with the well used candidate...

See the other full ad here

And if all this talk of Fiats has whetted your appetite for a Coupe, don't forget to check out our PH Buying Guide to get up to speed on everything you should be looking out for when buying.