We take a fancy to a fabulous French Ferrari. Frivolous folly, or fortunate find?

France has always been caught in the middle of the supercar triangle. On one side, the suave Italians and sophisticated Germans; on the other, the brawny British – and back in the 1980s, all three nations were at the peak of their wild-eyed, mad-engined creativity. 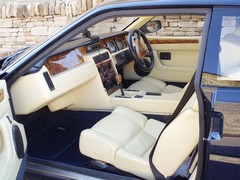 But why couldn’t France have a slice of the action? That was the view of two Heuliez designers – Gerard Godfroy and Claude Poiraud. They came up with the idea of a smoothly-styled coupe, built in France, that’d uphold French prestige in the supercar market. They called it the Ventury, and it made its debut as a prototype at the 1984 Paris Motor Show.

Within a year, racing driver Herve Poulain had raised the funds to produce the car, and formed a new company called MVS – Manufacture de Voiture de Sport – to that end. After an extensive period of development, which included chassis input from ex-racing drivers like Jean Rondeau, Mauro Bianchi and Jean-Pierre Beltoise, the Venturi – now spelled with an ‘i’ – was released to the public in 1987. 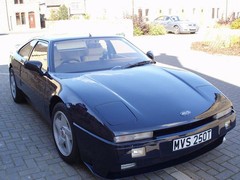 While the Venturi gradually gained power later on in life, giving it the stature to genuinely challenge the established competition, these early cars – of which our Spotted subject is one – were somewhat underpowered. The turbocharged PRV V6 produced 203hp, which took it to 60mph in a 6.9 seconds – not inconsiderable in its day, but not enough to challenge its purported rivals, the Ferrari 328GTS and Porsche 911. It could hardly be claimed to be dynamically perfect, either, with yawning turbo lag and an unrefined ride. However, the motorsport heritage in its development was clear to see in the Venturi’s handling character. The composite body made it light and nimble; a little twitchy on the limit, but with super-sensitive steering that fed back every last ripple and rut. What’s more, while you might imagine an 80s French car made of plastic would feel a bit flaky, the Venturi was not – the superb build quality in that wood’n’leather-swathed cabin was often singled out as the most surprising aspect of the 200. 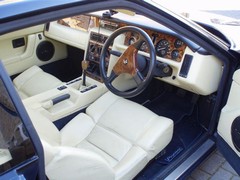 So it wasn’t quite in the leagues of a contemporary Ferrari, but the Venturi was still a very cool leftfield rival for cars like the Lotus Esprit and Alpine A610. This one, despite its rather unfortunate aftermarket taillights, is an appealing proposition – just 51,000 miles have passed beneath its tyres, and it’s just had an ‘interior refurb’ (we’re guessing that’ll mean a retrim and new carpets, then). There’s no mention of history, but we’re just going to hope that’s an oversight on the owner’s part and gloss over that fact. Throw in the appealing combination of dark blue paint over ivory leather, and you can see why it gets us excited.