You Know You Want To... Porsche 917 Bodyshell 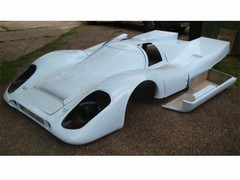 Replicas. Are they a chance to taste an otherwise prohibitively expensive motoring experience, or just the sacrilegious work of the devil?

That debate will run on forever, but the fact is that whether you lust after a Cobra, a Diablo, or even an MGTF, there are ways of getting into something which will at least look (and sometimes even sound) like the car you dream of, but for a fraction of the cost.

'Don't you have anything better to write about?' was the immediate response from esteemed car broker and the man who assembled the knee-weakening Gulf Collection, Adrian Hamilton, when I asked him what he made of this bodyshell. His response summed up how some people feel about replica cars. He asked me the starting price, and when I replied he paused briefly before adding 'I'd rather buy a new typewriter.' Not one for the purists then... 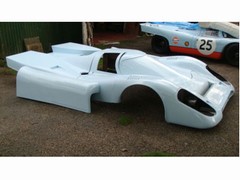 The vendor of the car (and owner of the John Wyer-Gulf Oil liveried car in the background), however, has been racing his 917 replica for five years and loves it. He made two replica bodies from David Piper's chassis #10 917 to supply repair sections for his racing car, and this one is now surplus to requirements. But, assuming that you don't have a replica 917 which needs replacement body sections, what would you do with it?

You can buy replica 917s like this, which come painted and fully assembled aside from an engine and transmission. This car is built in South Africa by Bailey Edwards and will cost approximately £60,500...plus shipping...plus duty...plus VAT...which leaves you to supply and fit the running gear and source a set of tyres (they're delivered with only used racing slicks.) But of course, even they already come with their own bodyshell... 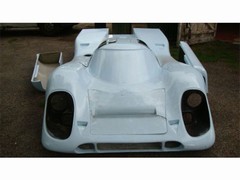 Trevor Williams, who runs TWR replicas had an idea. He reckoned you could take the body off a 911, turn the engine around and mount it further forward (the 917 was, of course, mid-engined), flip the gearbox upside down, and then mount the 917 body on the 911 floor pan - which is apparently how some 917 replicas have already been created. Mind you, you'd still have no windscreen, other clear plastics, interior, electrics etc...and even if you sourced all those bits you'd still be running a flat six engine as opposed to the correct flat 12.

Original Porsche flat 12 engines do still change hands...apparently for around £250,000 a throw...minus transmission, although an Australian company has built a Porsche flat 12 out of two flat sixes, but that'll still be on the expensive side. 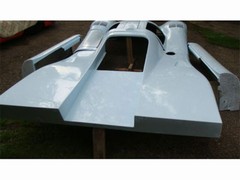 Sadly, it looks like buying a 917 bodyshell and then building a car around it isn't as easy as it sounds (

And it doesn't sound all that easy - Riggers

). But there must be something you could do with it - turn it upside down and make a canoe, perhaps?