Harris ponders the question: chase the rare bird or enjoy the cheaper delights of its more common brethren?

This is the nucleus of the used car adventure. We trawl the classifieds for hours, but the one question that will never, ever be fully resolved is the eternal debate between greater expenditure on perceived perfection - and a corking deal on imperfection because your expert eye spots an easy fix. 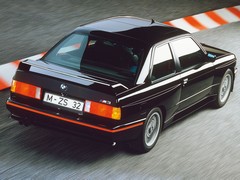 Prices of collectable M3s are just beginning to creep into previously uncharted territory, or should I say asking prices are doing this because I can't verify any actual transaction prices. Later Sport Evolution, or EVO 3, or 2.5 cars - whichever you call them - are

Is it deserved? Hard to say no. It's the most famous high performance BMW, there were only 600 built and I must have seen 10 totaled with my own eyes at the 'ring in the past decade. So there aren't 600 left.

A step rise in values of the real catch often leads to attractive disparities between the best and the average though: is a 2.5 really worth £40K more than a UK-supplied 1987 2.3-litre car? If you're looking to tuck it away and watch the value increase, it probably is. If you're going to drive it, the answer is no. 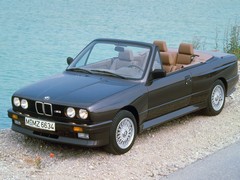 You Know You Want To ... you sure Chris?

In summer 2010 BMW held an event celebrating 25 years of the original M3 at Ascari race resort in Spain. It just laid out every possible example of the car and let you head off onto the Ronda road for a blast. Tough life, and all that.

I learned four things that day. First, the new E92 M3 GTS was way overpriced. Second, I want an E30 M3 cabrio, but am too ashamed to admit as much. Three, Bill Thomas, formerly of Top Gear magazine and now editing Wheels in Oz is highly amusing. Four, the 2.3-litre car is actually sweeter than the Macdaddy 2.5.

This last point was a shock. As a nipper I'd read about the 2.5's added power, but on the road, the best version I drove was a 200hp, non-cat 1986 model on 15-inch wheels. It provided the most authentic E30 experience. The steering was just delicious, the grip/power wrangle was only just settled in favour of the engine and it felt fantastic. 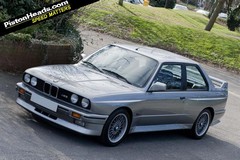 One to enjoy rather than tuck away

Of course there is always the possibility that this just happened to be a better example than the others, but I thought the 2.5 motor was much coarser, less willing to rev, and the extra grip on wider 16-inch rubber killed most of the playfulness.

And reminding myself of all that, I look at a £16K 2.3-litre car like this one, with a few bubbly panels and think 'you know what?' That suddenly looks cracking value next to a Sport Evolution. There might be £3-4K of stuff to sort, but you're still left with an icon at a fraction of the price of the one everyone's talking about.

And I think we all agree that the E30 has reached a stage where values are now only going one way.

When it comes to E30 M3s, I'm inclined to say shed. Well, older and not special-edition anyway.