The most important new car Jaguar has ever made? Discuss...

Whatever your views on SUVs, crossovers and the like the mainstream appetite for such vehicles appears insatiable. Indeed, by Jaguar's own estimates the market is due to grow by another 50 per cent over the next four years. Anybody still clinging on to a romantic notion of Jaguar simply as the British brand for sports saloons and coupes - or indeed for actually resurrecting the past -has to accept that an off-roader will soon be Jaguar's biggest seller.

The importance of the F-Pace to Jaguar explains how it looks too. For markets familiar with the XF and F-Type, its styling is clearly related. But where they are niche vehicles, the F-Pace will be the mainstream and established Jaguar design; XFs will look like F-Paces to them and not the other way around. Hence a front end that resembles an XF and the strong F-Type influence at the rear.

There's time allotted on the launch event for Ian Callum to talk us around the F-Pace, and he has some interesting points to make. See how far forward the front wheels sit, how far back the cabin is relative to those and how the window line tapers away and narrows towards the rear. It's appears a very well proportioned and beautifully detailed car, arguably more stylish than the first rivals that come to mind. Even if the First Edition Caesium Blue paint and 22-inch wheels do flatter the car somewhat. 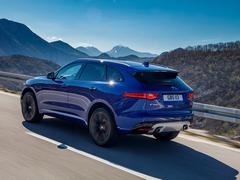 Ah yes, those 22-inch wheels. There are a variety of designs available on the options list, and the 'Double Helix' rims are standard on the First Edition. And do you know what? The F-Pace really works on them, still riding with the fluency and composure you would expect of a Jaguar. Naturally the ride is improved by opting for the smaller wheels, but not by as much as you might expect. They even look quite difficult to kerb, what with a reasonable 40-profile tyre. Keep an eye out on your local high street for inconsolable owners if it does happen though...

Our first miles on these wheels are in the petrol-powered First Edition that won't be sold in the UK; if you want this signature spec it's diesel only with the 380hp petrol V6 available as a regular S model. Either way, as you would hope from a £65K Jaguar SUV with nearly 400hp, it feels really rather lovely on smooth - and quite featureless - Montenegrin roads; terrifically fast, fabulously luxurious and supremely refined. But not especially relevant. And it's a brave owner who will ever drink a coffee in a car with leather this white.

Far more applicable to the UK is the 300hp V6 diesel, available to test in Portfolio spec. Got it? Whatever the trim combination, the 300hp diesel feels like the pick of the F-Pace range immediately. 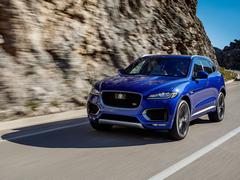 In the petrol V6 there's a nagging sense it should be driven as the engine wants - namely, quite quickly indeed. It makes a great noise and likes to rev, egging the driver on to push just a little bit more. And, well, when the roads become really testing and indeed interesting, the F-Pace can get a little ruffled. It takes a while to settle through direction changes or after a mid-corner bump, with the brakes too not feeling especially reassuring after a few downhill stops. Granted, these were driving scenarios that will rarely be encountered in the UK, or indeed by typical F-Pace owners, but that doesn't prevent the suspicion that a - whisper it -

may have dealt with the road more confidently. And that's 600 words before the Porsche is mentioned.

Anyway, the F-Pace's generally more relaxed gait better suits the torquey and effortless diesel. As the roads open out so the Jaguar shines, steering spot on for an electric system, gearbox shifting smoothly and the ride very well judged. Frustrating though it is for a cynical journalist to agree with the PR spiel, the F-Pace does drive in a manner entirely familiar from other Jaguar models. Funnily enough it's much like the XF 3.0d in fact, which is certainly a good thing. Just a bit higher up.

There's a key area where the SUV improves on the saloon though: infotainment. Yes, Jaguar finally has a system to take on the best, the new InControl Touch Pro system significantly improved on the touchscreens in the XE and XF. It responds more swiftly, looks more attractive and functions more intelligently. Some may bemoan the lack of buttons but, such is the intuitiveness of the touchscreen, they will surely soon be convinced. It isn't quite perfect - the navigation occasionally getting its waypoints confused - but it's a big step in the right direction. The materials inside feel expensive too, the overriding impression of quality from the build and that new screen enough to distract from some rather ordinary switchgear lower down the dash. 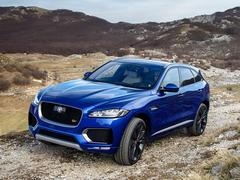 Can do this, and more off-roading too if required

The you in SUV

While we're on the less interesting everyday stuff, it's worth noting that the F-Pace is a genuinely practical SUV too. Largely this is down to the size, sitting as it does in terms of length between cars like the Macan and Q5 but beneath the X5. The boot is large and flat, six-footers can sit behind each other and there's plentiful headroom. Heck, even the Activity Key works easily if you're one of those people cool enough to do actual lifestyle stuff at the weekend. It is a wide car however, measuring 38mm broader than the Audi; on narrow roads it feels every one of those 1,936mm.

Interestingly the drive of the four-cylinder diesel F-Pace takes place after those with 300hp or more. A foolish move? No, actually. Reception appears to have been mixed on the new Ingenium engine in the XE and Discovery Sport, too much diesel clatter being the main issue. But rather like the infotainment system, it feels like this engine has been further refined for use in the F-Pace.

Certainly those familiar with the Ingenium diesel from previous experience noticed a reduction in noise and vibration. It's a perfectly acceptable diesel, working at its best from just before 2,000rpm to around 3,500rpm and delivering decent performance when allied to the eight-speed auto. Of course it's not quite the event the six-cylinder engines are, but the 180hp diesel comfortably fulfils all realistic expectations both on and off road - it doesn't feel like the lesser derivative the spec sheet may lead you to believe. 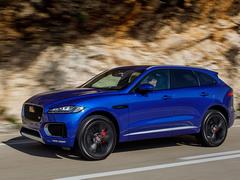 It's good alright - expect plenty on the roads soon!

Kick in the but

However. You knew this was coming, right? The F-Pace's report card cannot be blemish-free, unfortunately. Closer inspection of that spec sheet will reveal a few numbers that don't show off the Jaguar too well. Firstly, the much hyped 129g/km diesel model is only possible with two driven wheels and a manual gearbox. Having experienced how capable it actually is off road with AWD and how well integrated the automatic gearbox is, it seems unlikely any F-Paces will be specified without them. An automatic, AWD four-cylinder diesel actually emits 139g/km. Not a huge gain, but it will make a difference on company car tax. As will the fact adding an auto and AWD adds £3,690 to the price... A Mercedes GLC 220d, for example, can offer the same performance and efficiency figures with standard all-wheel drive and an automatic gearbox.

The F-Pace is not a cheap car either, most probably as a result of its slightly awkward positioning. As an example, the V6 diesel that proved so likeable is £51,450 in S spec. An Audi SQ5 is more powerful, faster and £5,975 cheaper. A Macan diesel is £45,942. A four-cylinder diesel F-Pace is £42,800 in range-topping Portfolio spec without any options. But if you've tried the V6 diesel, that's the engine you'll want.

Jaguar would counteract all this number crunching with a stat of its own though: on pre-orders this is the most popular Jaguar Land Rover product ever, with more F-Paces ordered up until a month before the launch date than even the Range Rover Sport back in 2013. It would appear the current desirability of the Jaguar brand, the styling and indeed the price were enough to tempt a great many customers to the F-Pace before it had been driven. On this experience it's easy to see how plenty more will now be drawn to Jaguar's first SUV as well - it's fantastic.