Meet the new boss, same as the old boss ... or is it? PistonHeads drives the new Porsche 911 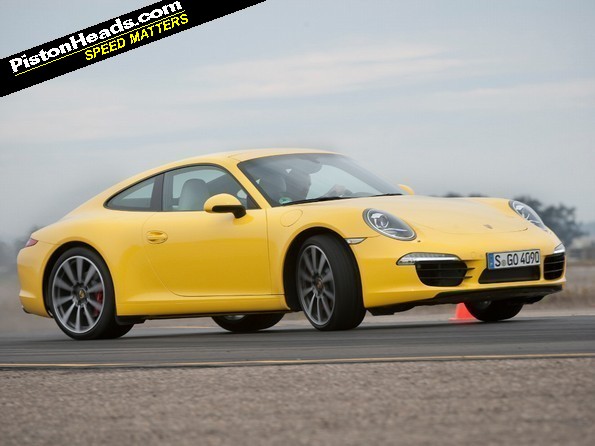 Turnarounds don't come much more dramatic. Over our first hour or so with the new 911 it's been a case of lots of teeth sucking. Quantifiably improved in every area is it actually any

The fear is Porsche has taken what we love about the 911, digitised and sanitised it and come up with some sort of electronically enhanced impression. Sure, it'll do the numbers. But with all the longer, more stable wheelbase, electric steering and Panamera-esque luxury trimmings surely we're seeing a shift in emphasis. 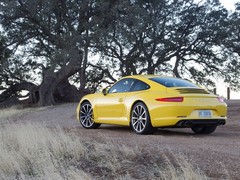 What, you expected it to look different?

First impressions of the PDK-equipped Carrera S we've bagged for the first driving stint are good. But not blinding.

Familiar 911 cues are all there. Well, it still looks the same as it always did, inside and out. Up to a point though. There are some seriously cool flourishes, the slash over the recessed rear lights a sweep of a designer's marker pen made real. The illusion of a more cab-forward stance is just that according to the measurements but the worry the 911ness has been diluted just a tad lingers.

Inside the row of five dials and reverse rake to the dash are familiar as ever, ditto the slammed to the deck seating position and better than average visibility. The big centre console is new and as button festooned as the Panamera and Cayenne that influenced it but the 911 still feels narrow, compact and wieldy, the only extra width on the 991 in the front track. A pity about the stupid, fat-thumbs steering wheel though - oh for the slim-rimmed wheel of old! 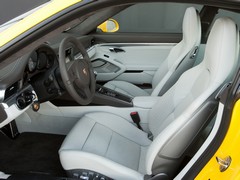 Interior is a big step up in design and quality

And what of the controversial move to electric assistance? OK, so it saves fuel. But the fluidity and gentle nibbles of feedback from the wheel are among the things we hold so dear about the 911. And no matter how good Porsche says it is the new system is an artificially enhanced impression. A very good one, with great weighting and response. But there's a twang and springiness about it that doesn't quite carry the illusion.

The PDK of our test car is the same. Objectively it works great, slurring its way rapidly through the ratios as quickly as possible. Left to its own devices it's crisp, efficient ... and, yes, mainly those things.

We're all used to digital music these days, the compression and loss of nuance accepted as the cost of convenience and portability. And cars are going the same way, the dial-a-mode button pushing selecting throttle response, damper settings, exhaust noise and more on our test car all contriving an effective simulation of a great new 911. But is it actually that? Hell, even the noise, great as it is, comes from a 'sound symposer' transmitting induction noise to the cabin. 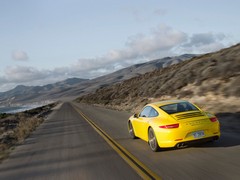 Classic 911 traits remain though, just about. The longer wheelbase and extra track in the front (46mm on the Carrera, 52mm on the S) haven't entirely stabilised the familiar bobbing and chatter through the dampers, Porsche thankfully happy to let the body move and react to the road rather than just steamroller it into submission. And no PASM equipped 911 ever rode this well before, to the extent that you'll be happy leaving it in the harder sports setting more often than not.

To PDK or not PDK, that is the question
Manually controlled via the weighty, aluminium shifter paddles PDK does get better. There's a lovely tactility to the paddle, upshifts zinging through without delay and downshifts even more dramatic and delivered with a satisfyingly mechanical whump. But there's a sense that things are just a bit PlayStation and this detachment means it's easy to carry too much speed into bends and feel the car running away with you a tad. 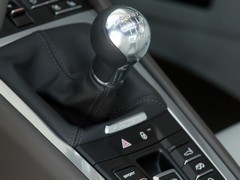 The key to unlocking the 991's real talent

reticent about letting anyone having a
go.

A degree of assertiveness is required to bag one of the three here but the PH beach towel is placed firmly over one of them at the lunch stop.

And it takes all of a few hundred metres in it to let out a huge sigh of relief. Suddenly it all clicks into place. It doesn't matter that the sound is artificially enhanced. Because the outrageous, searing howl that erupts in the extra 300rpm the flat-six now has was your choosing, not that of some black box or sensor. And those fierce little stabs of noise as you blip down two, three gears on the approach to that corner? All your own work.

It's easy to get complacent about quite how special this engine is too. We're only on the second rung of the 911 ladder here and already we've got 400hp and the kind of inertia-free zinginess that's always set Porsche flat sixes apart. It's magic but it needs working hard, both peak power and torque now at least 1,000rpm higher in the rev range than before. That's unusual in this day and age and a shock if you're accustomed to turbo engines - petrol or diesel - that hand it all on a plate before the rev counter passes 2,000rpm. You'll need nearly three times that for the best from this engine with nearly another 2,000rpm before things get really riotous. And with the manual you've got the time to fully appreciate every nuance of that huge power band at a time of your own, rather than the computer's, choosing. 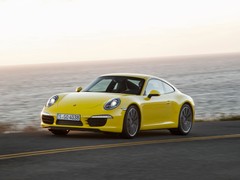 Say hello to the £100K Carrera

To think, even a GT3 only had 35hp more power than this, the tight, short throw of the gearshift and appetite for revs offering more than a taste of that car. High praise indeed and, indeed, decked out with all the toys a Carrera S will now lap the 'ring in around the same time, recording a blistering 7:40. It will also cost, like our test cars, as near as makes no odds £100K.

With so much more interaction in what the car is doing you end up driving it harder and with much greater focus and clarity. Corners are properly assessed, entry speed considered, gear selection made and carried out and with this precision comes far greater speed and composure.

Turn-in becomes sharper because you're concentrating harder on getting it right, the fabulously quick damping meaning even violent bumps and dramatic camber changes the like of which are common on Californian back roads do nothing to upset the chassis. And, yes, that agility may be augmented by gizmos like the PDCC. But it's not alienating or artificial. You're involved, full immersed, all the time that flat-six howl burning deep into your head and carrying you bodily to a very, very happy place. And with that confidence comes ever and ever earlier application of power and that familiar 911 slingshot corner exit, again with a little help from the black boxes (this time PTV) but again thankfully natural in feel. Hell, it'll even pick up an inside front wheel, old school style, if you're really trying. 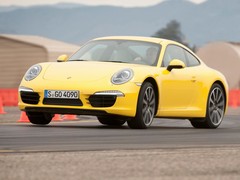 This is fabulous. This is what we want out of a 911. And it's all there for the taking with the simple addition of a clutch pedal and stick shift. Better still the £2,387 you save on PDK can go a long way towards more worthwhile options. Like the sports exhaust and, maybe, the PTV/limited-slip diff.

Is the extra plane on the gear selector as confusing as it appears? Not in this situation, third and fourth being adequate for nearly any eventuality. You wonder if a shift-lock like that engaged on PDK that cancels out seventh when in Sport Plus might be an idea but when you're driving hard you forget it's even there.

And finally a hint of the real 991 shows itself. It had us worried there for a minute.

Starved of stats? See our separate story for the number crunching bit