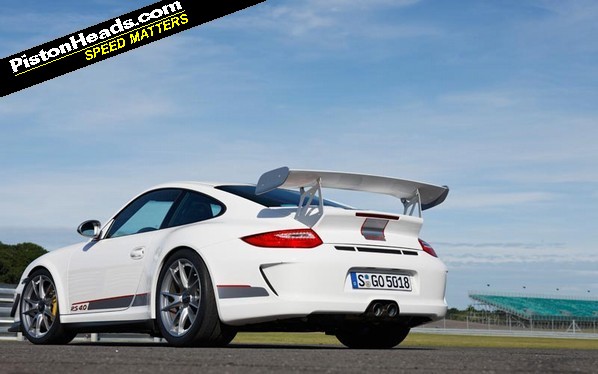 If there's a world at Porsche beyond ever more hardcore 911 GT3 and GT2 variants (nine and counting on his watch), GT cars boss Andreas Preuninger doesn't appear to acknowledge it. Indeed, it's hard to imagine his department hanging out with colleagues on the Cayenne and Panamera production teams, or even giving them the time of day in the staff canteen. 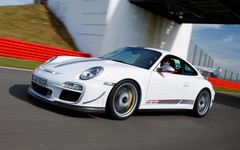 It's that kind of single-minded focus that results in cars like the GT3 RS 4.0. It's not clear whether Preuninger is voicing the official line or his own personal view when he declares the RS 4.0 the ultimate 911. But it's clear there's bittersweet satisfaction that this car represents the conclusion of 12 years of expertise building GT3 911s.

Of course if you're a 911 fanboy you'll likely already know all about the GT3 RS 4.0. But, even if you've got the necessary £128,466 there's some bad news. They're already sold. All 600 of them. Of that number our contact at Porsche was somewhat vague on how many would be coming to the UK, eventually conceding it would be "around one per Porsche centre" but "less than 10% of the overall production run." So that'll be a number greater than 32 but fewer than 60 then. 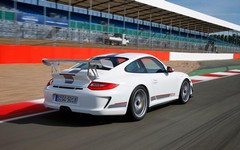 That spec sheet statisticians won't find a whole lot to get excited about in the seemingly minor performance upgrades over a regular GT3 RS is to be applauded. After all, if Autobahn blitzing and spec sheet willy-waggling are your thing you still need a 911 with forced induction, the GT2 RS taking this to its most extreme conclusion.

No, the GT3 RS 4.0 is about details. Details resulting in the famous 'Mezger ' engine's capacity creeping up 200cc to make it the biggest ever fitted to a roadgoing 911 and boosting power over the regular GT3 RS from 450hp to 500hp and torque from 317lb ft to 339lb ft. The 4.0's additional aero - nine degrees of rear wing over the RS's six and front bumper mounted 'flics' to reduce resulting front-end lift - mean top speed is only 1mph up at 193mph and 0-62mph down a tenth to 3.9 seconds. But what was that about meaningless stats? The changes to the 4.0 can be better appreciated in just one corner on Silverstone's International Circuit. 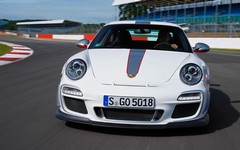 On the advice of the bloke in the passenger seat - 1970 Le Mans winner and occasional 'Porsche Driving Consultant' Richard Attwood no less - I try short-shifting from third to fourth before turning into the new pit straight following the Club chicane. Where the regular RS would bog the 4.0 digs deep into its newly expanded torque curve and by the time I exit the corner I'm fast approaching the 8,500rpm redline, grabbing fifth and arriving at Abbey 20mph faster than I did on the last lap. Yikes!

Preuninger admits the 3.8 RS's flat six is "not a tractor engine" but by increasing the stroke - there was literally not enough metal in the block for any increase in bore - with the same crank as used in the half million pound RSR race car they wrung out those final few hp and lb ft. New heads, cams and shorter, wider inlet tracts also play their part in the astonishing 125hp per litre specific output. Oh, and if you're worried about durability part of the test programme was running flat out for 3,000km at Nardo. 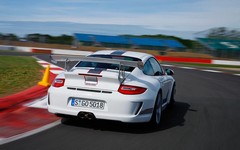 The thing that strikes you from the wheel of the 4.0 is both the incredible response such a highly tuned, normally aspirated engine gives and the way detail improvements to the RS's already fabulous chassis help you exploit them. Sure, there's the usual PASM adjustable damping but Attwood's advice is to leave it in the standard setting and be done with it.

Like the GT2 RS, the 4.0 gets additional rose joints on the suspension arms and uprated coilovers with compensator springs to allow a shorter, lighter main spring. None of this fancy pants hardware can overcome those inherent 911 handling quirks though and the 4.0 still has that 'will it, won't it' light-nosed feel on turn-in that, assuming you've not totally overlooked the additional speed you arrived with (see above), can be bled off with a little bit of trail braking. The fierceness with which the engine responds has you wary of being too early on the power but, inevitably, even when you think you're being brave you're actually being a wuss and everyone will know about it, so loud is the exhaust when you're on properly on it. Dig deeper and the response is so accurate, the communication so undiluted that you can actually feel the differential begin to lock up and fire you out of the corner for that classic 911 slingshot effect. 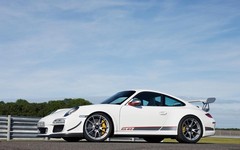 Traction and stability control are there and can be independently disabled but drive with the smoothness and accuracy the 4.0 encourages and you'll only see them wake up at the very extremes of the handling envelope. At which point you'll most likely be glad of them.

Again it's the engine that dominates, the rate with which revs and speed build requiring serious mental recalibration. Like all 'proper' Porsches this is a car that makes demands of its driver and assumes a certain level of competence before giving its best. There's no Ferrari style ego massage here.

And though the stickers, plank-like rear wing, roll cage and aero flics mark you out as a bit of a tragic wannabe away from the track from the driver's seat you won't mind. Because, like the regular RS, the 4.0 is surprisingly viable as a road car. A road car that doubles, trebles even, speed limits in the blink of an eye admittedly. But it rides well, bumps, cambers and ridges clearly communicated via wheel and seat of the pants but the feedback so clear and faithful it's never intimidating. 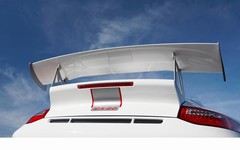 It's on the track where this car really gives its best though and if there's one measure of the improvements that'll really count to aficionados it's that all-important 'ring lap time. And here it really shows, the 4.0's 7:27 six seconds faster than the 3.8 RS and 13 seconds quicker than a regular GT3. Matching performance like that will require a pair as steely as Röhrl's. But the satisfaction of knowing the car can do it - even if you can't - and would be perfectly acceptable for the long schlep home across Belgium is the kind of credibility an RS Porsche thrives on. This final swansong edition more so than ever.