it is, because this rear-wheel drive, flat-four coupe is no longer a 'future Toyota'. Some would argue it isn't a Toyota at all, but there's a lot of Japan's biggest car company's input into the GT86/ 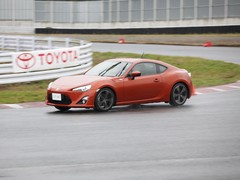 The fundamentals you know: they've been kicked around for long enough. Now we get to drive it, at the Sodeguara Valley racetrack in the forests beyond Tokyo, and the signs are good. Project leader (at the Toyota end) Yoshi Sasaki sets the scene nicely before we venture out on track. "A fun car," he says, "'is a car that you control." He talks of how some car enthusiasts have got fed up with cars that cost too much, in which the driver doesn't do enough and which rely on hugely powerful turbo engines, four-wheel drive and massive grip.

So there's no turbo here, and drive goes solely to the rear wheels. The 1,998cc engine has a high 12.5:1 compression ratio and both direct and indirect injection, to produce 200bhp at 7,000rpm and 152lb ft of torque at 6,600rpm. Front suspension is by struts, rear by double wishbones and there's a Torsen limited-slip diff.

It's more about handling than horsepower

And that's broadly it, simple, pure and loosely based on a latest-model Subaru Impreza platform but with bespoke suspension geometry and settings. You can have a six-speed auto if you must - it's a torque-converter 'box, with snappy paddle-shifts by a system similar to that of the Lexus IS F - but why would you not want the six-speed manual?

You sit low in the GT86, helping towards a centre of gravity said to be lower than a Cayman's. I press the start button, snick into first gear and head onto the sinuous, three-dimensional and threateningly wet track. Straight away the GT feels taut, keen, lighter than its 1,200kg. The engine has a sharp, crackly beat from within, somewhere between an Impreza and an Alfasud but without the deep throb of a traditional breathed-on Subaru. 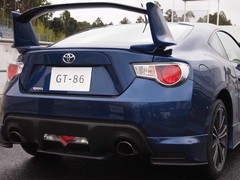 Big wing option harks back to the last Celica

A wet track means the balance will very quickly make itself clear, as will the quality of the steering's communication. Three bends on and the GT 86 has lifted the fog we hadn't realised has been surrounding too many new cars. I'm in touch with the track as though stroking the surface with my bare hand. It's extraordinary.

Here's a fast, downhill right. Traction and stability systems are off. The front wheels are washing slightly wide under gentle power, but in the best rear-drive fashion I can squeeze the accelerator a little harder and feel the tail edge out to match. Now the GT is balanced perfectly through the long curve, right foot the arbiter of the line, then I can nail it at the exit and let the engine rev out before snicking into the next gear.

It's not what you've got...
It's not a massively potent engine, and its low-end response is crisp rather than muscular, but the power build-up is very progressive and easily, instantly metered. Here lies part of the secret of the way you can control the GT 86 so sensitively. Along with the steering's precision and similar linearity of response are balance and a lack of roll that comes with the low centre of gravity. Powerslides are yours for the asking, recovering them could hardly be easier. The gearchange is quick and easy, too, and the brakes match the other controls for progression. 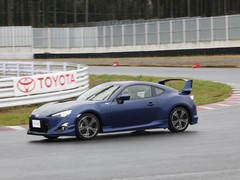 Sounds good, yes? Then you learn, on returning reluctantly to the pitlane after some of the most enjoyable and tactile track laps you've had in a while, that the power steering is - yes - electric. Not only that, but the motor is mounted on the steering column rather than the rack, popularly supposed to be an inferior system. I'm stunned when Mr Sasaki tells me this. "We've got very good at the programming," he says. As someone who has consistently disliked EPAS, I have to eat my words here. Not even the

EPAS is this good.

Number crunching
Some stats, not yet set in stone but close to it. Top speed is around 143mph. From a standstill to 62mph takes a little under seven seconds. Official 'combined' mpg is about 42 with CO2 under 160g/km. The GT86 is plenty fast enough and won't destroy the planet.

It also looks good, if very similar to the BRZ outside and in apart from the front air intake. There are shades of Toyota's 1960s 2000 GT in the glasshouse, one of three influences Toyota likes to cite (the others being the rear-drive, 16-valve Corolla Twin-Cam AE86 and a little 800cc flat-four, rear-drive sports car that I'd never heard of, known as Yotahachi. There are small rear seats but Yoshi Sasaki hopes they'll be more often be folded down to accommodate a set of trackday wheels. 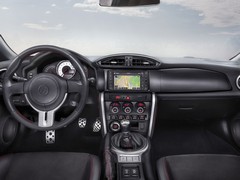 There is an auto option by why would you?

The GT86 is the sort of car that restores your faith in the world. It feels fantastically intuitive on the track, with the purity and transparency of an early MX-5 but sharper and lower in inertia. In fact I can't think of another car that has felt this good, this all-involving in years outside the realms of Caterhams and Elises, yet this one has a roof and you can use it for any journey you like. Based on our experience so far, the world's third-biggest car manufacturer has just made possibly the best affordable fun car you can buy. Being a Toyota it will probably ride well on real roads, too.