Resolved to buy a Bentley? What a coincidence - here's how to bag the perfect Arnage T!

It was quite a statement of intent from Bentley and its VW parent company when, in 2002, the Arnage T arrived as the most powerful four-door production saloon in the world. Now, a saloon with 450hp and 645lb ft of torque is not unusual, but more than a decade ago it set tongues wagging and set the Arnage T apart from its lesser sibling and, crucially, from its now distant Rolls-Royce cousin. 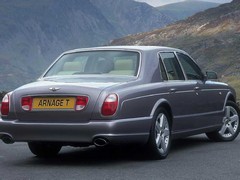 Arnage a pleasing intersection of classic and modern

emerged from the bickering between BMW and VW as they scrapped over the sale of Bentley and Rolls-Royce. BMW had been supplying the engines for the Arnage at launch in 1998 and a V12 motor for the Rolls Seraph. However, when Volkswagen assumed ownership of Bentley, there was no way it would countenance an engine from an arch rival. With no other motor in its stable to replace the 4.4-litre BMW turbo V8, VW hastily revived the classic 6.75-litre V8 that has been in use in Rolls and Bentley models since the last 1950s.

Cosworth was tasked with bringing the engine up to date with twin Garrett T3 turbochargers. This boosted power to 400hp to begin with for the Arnage Red Label, which later became the R, and helped the car meet current emissions regulations. More boost took power to 450hp in 2002 for the launch of the Arnage T, which could see off 0-62mph in 5.8 seconds and head on to 168mph. 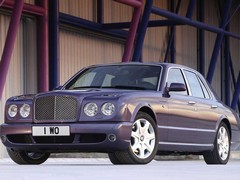 A facelift followed in 2004 for the 2005 model year with the engine developed to meet Euro4 emissions standards. It also brought a revised dash for better ergonomics, minor dash controls hidden behind wooden panels, a new sat-nav system, and revised rear suspension for a smoother ride. At the same time, 19-inch alloy wheels became standard for the T.

The year 2004 also saw the introduction of the T-24 to celebrate Bentley's six wins at Le Mans. The T-24 has carbon fibre in place of much of the Arnage's usual chrome trim, subtle Union Jack flags and louvres behind the front wheelarches. 24 T-24s were built for the US market, with a few more made for the UK and Europe.

Bentley went on to revise the Arnage T once more in 2006 for the 2007 model year. Power of the V8 engine went up to 500hp thanks to new low-inertia Mitsubishi turbochargers, while a new six-speed ZF automatic gearbox replaced the old four-speed GM unit to cope with torque of 737lb ft and deliver smoother shifts. Bosch ESP 5.7 traction and stability control was also made standard. Together, all of this helped top speed rise to 179mph and 0-62mph drop to 5.5 seconds. 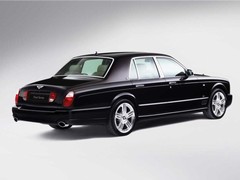 While the R is all but mechanically identical to the T, the Arnage T is generally the more sought after. All of the advice in this guide applies to the R, but we'll concentrate on the T, which now costs from around £28,000 for sound cars all the way to £80,000 for the very best of the run-out Final Series models. When looking for any Arnage, a inspection by an acknowledged expert is essential and many offer this service for free.

PHer's view:
"In terms of the driving experience the car is brilliant. It will cruise all day at 90mph and return 17mpg. The acceleration is phenomenal, particularly with the amount of torque available at low to medium speed. I think I am quite a quick driver but I have yet to put it into sport! We took it down through France and the Alps this year and it behaved impeccably and with huge style."
Paul Marshall