Engine is built to be thrashed, but ensure the oil is kept fresh

has a bore of 86.0mm and an identical stroke of 86.0mm. It is often described as unburstable and bomb-proof, though this comes with the proviso the engine has had its oil regularly checked and topped up. You also need to be sure it's been fed with the best quality 5W/40 fully synthetic oil to keep the engine in the best possible health. 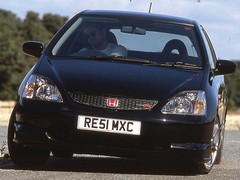 Quaife LSD can make it even better here

Oil level and quality are crucial to the EP3 Type R because of its high revving nature and the VTEC system needs the oil to function properly. Many owners caution against letting the oil level drop to the point where the oil warning light comes on as it can be too late by this point to prevent damage to the engine

Check the VTEC comes in crisply at around 5,500rpm, though it is possible to lower this point with an engine remap. The engine also responds well to an induction kit to improve breathing, while a remap will help in conjunction with this and a freer flowing exhaust. Facelifted cars have a lighter clutch and flywheel for better throttle response, but have no more power.

Cam chains and tensioners could need replacing on many EP3 Civic Type Rs and should be done at 75,000 miles along with having the valve clearances and tappets checked. Listen out for any noises from the top end of the engine. Loose heat shields and manifold covers can cause rattles and are cheap to fix.

The six-speed manual gearbox is generally tough, but check second gear engages smoothly and doesn't jump out of gear under acceleration. There was a Honda recall for this, so check it's been attended to on the 2004 cars affected.

UK cars did not come with a limited-slip differential, which Japanese market cars did with a Torsen unit. However, you can upgrade with a Quaife LSD differential for £690 plus fitting that will transform the car's traction in slower corners and on slippery roads. Engine and gearbox mounts can fail if the car has been abused or seen a lot of track use, so rock the engine to see if it moves more than it should.

PHer's view:
"I had to learn quickly where the power was accessible in the rev range and where it was non-existent. It was easy to get caught out in the wrong gear if not paying full attention. On a B-road hoon it was perfect if you kept it in the VTEC zone, very good fun and probably all you'd ever need."
Jon Tilbury