The new Leon Cupra launches today at Geneva; here's how to land yourself an original

Talk about timing: SEAT couldn't have hoped for a more opportune moment to join the hot hatch fray with its fast Leon in 1999. Originally badged as the Leon 20VT Cupra, it easily bettered parent company Volkswagen's dour Mk4 Golf GTI. The Golf had grown fat, slow and was trading on past glories where the Leon was lean, fit and fast with 180hp to see off 0-62mph in 7.7 seconds. At £14,995, the early Leon Cupra, which is a contraction of Cup Racing as a nod to SEAT's rallying activity at the time, this was a bargain hot hatch that boasted five doors and five seats. 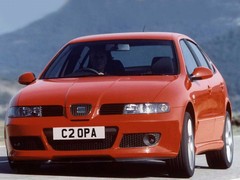 range was expanded with the addition of the Cupra R that came with a 210hp engine lifted from the Audi S3. It used the same 1.8-litre turbo petrol motor as the base Cupra but with revised intercooler, 18-inch alloy wheels, Brembo brake calipers, quicker steering rack and revised spring and damper rates. It also sported a more aggressive look courtesy of different front and rear bumpers, including a low-slung front splitter

The R instantly became the Cupra to have thanks to 0-62mph in 7.2 seconds and a top speed that rose to 147mph from the standard Cupra's 142mph. However, SEAT wasn't done just yet and uprated the R to 225hp only a year later in July 2003. It delivered a claimed 0-62mph time of 6.9 seconds, though contemporary road tests regularly lowered that to 6.5 seconds, and top speed climbed to 150mph. All this and it still only cost £17,500. 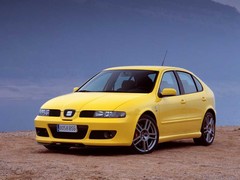 ...to something progressively more wild with R

SEAT also attached the Cupra name to a 150PS turbodiesel model in 2003 that knocked off 0-62mphin 8.6 seconds while returning 52.3mpg average economy. For the purposes of this buyers guide, thought, we'll stick with the petrol models that can be picked up for much less than £1000 now for early high milers. Late model Mk1 Cupra Rs in perfect condition come in at around £5500, so it's a very affordable way to have a family car that is still rapid enough to entertain a PHer.

PHer's view:
"In hindsight, I wish I'd held out, done a bit more research and gone for a Cupra R. At my age (late 30s then) insurance wasn't an issue. The 180hp was sufficient for daily use, but the R has the smooth bumpers and just generally looks nicer in my opinion."
Hendy