The Lancer by HKS was a proper mouthful in 2007. It was also the swansong for the peerless Evo... 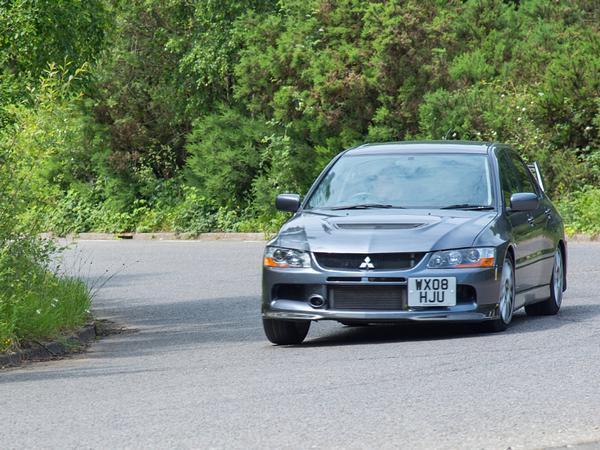 Twenty years ago this year, Mitsubishi won the World Rally Championship as a constructor. Tommi Makinen won the Driver's Championship, as he had the year before and as he would the year after - in a Lancer Evolution IV, then V, then VI. With help from Richard Burns, he beat out Carlos Sainz and Colin McRae and Juha Kankkunen; meaning that Mitsubishi beat out Toyota, Subaru and Ford.

It was the high watermark for the manufacturer's involvement in motorsport, and it helped make the Group A homologated versions of the otherwise entirely forgettable Lancer hugely famous. The IV and V became a major constituent of a snowballing grey import market; the hitherto obscure JDM drip feed turning into a virtual flood before Mitsubishi UK finally got the message. Buoyed by the cult-like popularity of the nineties tuning market, interest in the subsequent Evo generations didn't wane even as the firm's success in WRC dried up.

By the end of 2001, Tommi had gone and Ralliart's solution to the latest regulations failed to produce consistent results. But investment in the increasingly differentiated road car did not decline. The VII might have been larger and heavier than the car it replaced, but it was enormously sophisticated; the previous model's viscous coupling having made way for the electro-hydraulic clutch-based Active Centre Differential, regulated by the same control unit that housed the manufacturer's renowned Active Yaw Control system.

Much like the Nissan R34 Skyline, the Evo's successful assimilation of what seemed like physics-defying technology only intensified its reputation - and the VIII (alongside Super AYC and a close ratio six-speed manual 'box) doubled down on this notoriety in the UK with the launch of an increasingly outrageous range of FQ-badged cars, culminating in the Ralliart developed, 202.9hp per litre FQ-400. The resulting level of performance - 3.5 seconds to 60mph; 9.1 to 100mph - made the limited-edition, £46,999 model a much celebrated vanquisher of early noughties supercars.

The IX FQ-360, introduced three years later, was in many ways that car's spiritual successor. It capped off a three-model lineup (FQ-300, FQ-320, FQ-340) and shared some trick components with the FQ-400, not to mention the expertise of the Ralliart engineers who helped create it. Most significantly, while its output was plainly lower at 366hp, it produced slightly more torque, and did it a whopping 2200rpm earlier than its predecessor had managed.

Mitsubishi though, saved the best for last. In the final year of IX production, its UK importer announced that 200 examples would be distinguished with the MR FQ-360 by HKS badge. Within this mouthful (which was also a little too much for the boot lid) it was the MR - or Mitsubishi Racing - bit that confirmed this as the variant which wore shortened Eibach springs, lowering the car 10mm at the front and 5mm at the back onto Bilstein dampers and 17-inch Speedline Turini alloys.

Contemporary reports make note of the resulting firmness, but - driven today in immaculate Mitsubishi heritage fleet format - the MR is almost putty-like compared to the current generation of take-no-prisoners chassis configurations. Not once does it feel overdamped or needlessly abrasive; its relative compliance helped along by the three fingers of tyre profile you get alongside the uprated suspension components.

Quiet, of course, it isn't. Not in the running gear, and certainly not at the business end of the angry buzz emerging from the ginormous HKS exhaust either. Nor is it slow. Not by any contemporary measure. That ought to be a given for a 1400kg Evo with 363lb ft available from 3200rpm - and yet somehow its reputation hardly prepares you for the enormous, ever-escalating thrust which appears at middling revs, and barely tapers past 7000rpm.

Ostensibly, there's been a decade of progress between this variant of Mitsubishi's mighty 4G63 twin-scroll turbocharged four-cylinder engine and now - but honestly, in pure performance terms, you'd hardly know it. The venerable unit, reworked multiple times in its life span and specifically tuned in this iteration to be more drivable, still puts most modern alternatives to shame on all the criteria that matter. On song, the throttle response is tremendous, as is its tractability and the motor's capacity for revving well beyond the 6887rpm at which peak power is produced.

There's plenty of turbo lag below 3000rpm, mind - and it's best not to dwell on the amount of super-unleaded being hoovered up the high-pressure fuel pump at pretty much every operational phase above idle - but the MR's growling, unrefined and relentlessly prolific 2.0-litre engine, as well as its snappy six-speed manual gearbox, are so engaging that Hero status would be easy to bestow on the FQ-360 regardless of its other abilities.

Not that the car needs any help, of course. The MR follows in the grand Evo tradition, and is every bit as compelling as the motor that powers it. Anyone accustomed to the current vogue for ultra quick electric steering will likely find the rate of response on the car's hydraulic rack a little slow - but it doesn't take long to appreciate its talkativeness or the subtle build up of resistance that occurs as soon as the Yokohama Advans come under duress.

True enough, there are plenty of like-minded cars around today which might claim superior body control to the IX, yet because you're never left in any doubt about the underlying mechanical grip being generated, the wing-dipping buoyancy just makes the MR seem more animated and involving - particularly at the national limit, where virtually every modern equivalent feels immune to roll - and dismissive of the speed with it.

Beyond the control surfaces and the ever-ready 4G63, it is the ACD and Super AYC doing the heavy lifting. When the steering input is small and the bend long and fast, the drivetrain does no more than is required to make the MR seem neutral and steadfast on its line. But in slower, constant radius corners, the four-wheel-drive system's dynamism isn't far short of breath-taking. Aside from choosing the surface conditions (Tarmac, Gravel, Snow) at the start of your journey, no button pushing is required to have the torque moving around in the most expressive, fun-packed way imaginable.

Very few AWD systems created in the intervening years succeed so intuitively or adapt as spontaneously to the whim of the driver - and for all the boasting about rear-axle bias, adaptive torque vectoring and associated drift mode malarkey, practically none of those produced by mainstream manufacturers treat a sustained loss of traction as such an integral part of the appeal. The MR does, and in a way that makes you appreciate the preceding eight generations of experience used to make it seem so progressive and un-scary.

Certainly the chassis does nothing which isn't fundamentally connected to your right foot. Keep your toe in, and you'll get grip and the gratifying sensation of the power shuffling unmistakably backwards to counteract understeer (to the point where it will cheerfully favour oversteer). Or else lift off, let the weight shift (which it will, virtually in slow motion) and then reapply only when you're sufficiently far sideways to let all those heavy-duty acronyms marshal you straight.

Ten years on and the rest of the industry might have caught up with (and surpassed) the FQ-360's outlandish power output - not to mention the gains made in efficiency, refinement, reliability and quality - but it hasn't come close to replicating its supremely tactile limit or the built-in level of entertainment beyond. From a 2018 perspective, that's rather disheartening - as is the knowledge that the MR FQ-360 by HKS was the Evo's final high note, before the slippery slope of the X and the ignominy of cancellation thereafter.

Today they are predictably hard to find. There is currently just one in the PH Classifieds, priced at £23,995. Alongside the initial outlay there's the car's shameless thirst for 98 octane fuel to consider, as well as the Evo's notoriously frequent servicing schedule. But the MR stands apart from practically everything else built with multiple doors and two driven axles since 2008, just as it stands apart even from its predecessors. For the price of a new Polo GTI you get a proper icon of real-world performance; one that has not lost a single shred of what made it so special a decade ago.