PH samples Ariel's updated Atom 3.5 - it's more awesome than ever

We’ll set the record straight at the start. 3.5 doesn’t refer to another ridiculously

akin to the firm’s scary 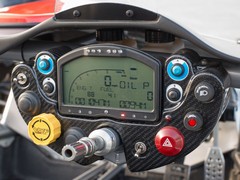 That means the looks are tweaked, there’s a new LCD dash that will log your data on track and show what gear you’re in, some geometry changes that alter the steering – making it more forgiving on-road, without losing any of that track focus – and more bracing around the new engine and rear suspension mounts, meaning the ‘point-five’ is 15 per cent stiffer torsionally than the 3.

Don’t be soft
As I cruise along the A303 from Ariel’s Somerset base to meet snapper Tom near Stonehenge I’m watching the Atom’s nearside front wheel track the surface through the chassis’ exposed lattice work – the car’s reaction to the image I’m seeing doesn’t compute.

The wheel spikes up and down but the compliance in the dampers filters out any harshness. Granted, cat’s eyes can still give a clonk and grids can initiate a minute waggle from the rear (most likely to do with setup), but the plush feeling from each corner of the car on normal roads at normal speeds is accomplished to the point of being incongruous given the Atom’s hardcore focus.

Don’t think this has made the car soft though – it’s still bristling with all the pent up aggression of a caged ferret. 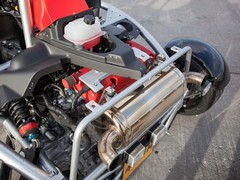 The 3.5 uses the same supercharged 2.0-litre Honda VTEC motor as before, but the new car gets a 10hp boost to 310hp, courtesy of alterations to the mapping, plumping up the mid-range. It didn’t need it, but it’s got it. The engine’s ferocious, and the 229lb ft of forced induction torque means instant acceleration in any gear that’d embarrass a 911 owner. It’s here the gear display comes into its own too, as in third, fourth and fifth the motor produces a seemingly similar horizon-smashing bout of acceleration.

Throttle response is immediate, despite being fly-by-wire; what you ask for is exactly what you get. The engine has a massive appetite for revs and it’s easy to run into the staccato pap-pap of the 8,600rpm limiter. The six-speed manual Honda ‘box just adds to the feeling of relentless pace, too – each manual change snicked punctuates the onslaught and involves more than a paddle shift transmission ever could.

If you’re after the stats 0-60mph comes up in 2.7 seconds, 100mph in a superbike troubling 6.8 and top speed stands at 155mph. Believe those numbers – it simply atomises the road. 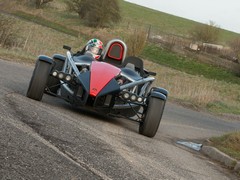 The steering changes haven’t stripped the 520kg Atom of any of its agility. The 3.5 gets more toe out to help turn-in, and combined with 1.7 turns from lock-to-lock it means the steering is fast, accurate and stable.

There’s understeer on turn-in and you can feel the comparatively light front end smudge the tyres across the Tarmac. Trail the brake on corner entry to keep weight over the front and you can coax the nose, then pick the throttle up and reverse the balance – making the Atom’s natural weight distribution key the rear rubber into the road – and you’ll be fired out the other side.

It sounds technical but it’s intuitive; you just do it. The 290mm four-pot Alcon brakes all-round give a reassuringly solid feel and inspire confidence to brake late and deep despite lacking ABS. 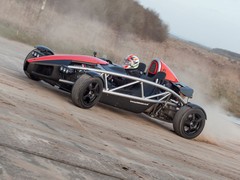 Slides are manageable, but rare

If it does slip into a slide it’s manageable, but even on slick, greasy roads and lightly treaded Yokohamas there’s plenty of grip. Get them hot on a dry track and not much this side of a slick-shod and wing-wearing racer will come past you all day.

Road and/or track
I played around with the suspension damping all day but returned to Ariel General Manager Tom Siebert’s settings. For the road they’re spot on and tread the perfect line between tautness, control and compliance.

You can’t exactly call it practical but the Atom 3.5 is a better road car for the changes, without losing any of its single-minded focus to go faster and harder than whatever it’s placed against.

Obedient on the cruise and with a motor that’s happy to pootle around at low revs the Atom 3.5 is as docile as you like, making a great car even greater – that’s because it hasn’t lost its rabid character at the other end of the spectrum. Stoke it and it turns into the same unhinged piece of weaponry it’s always been.